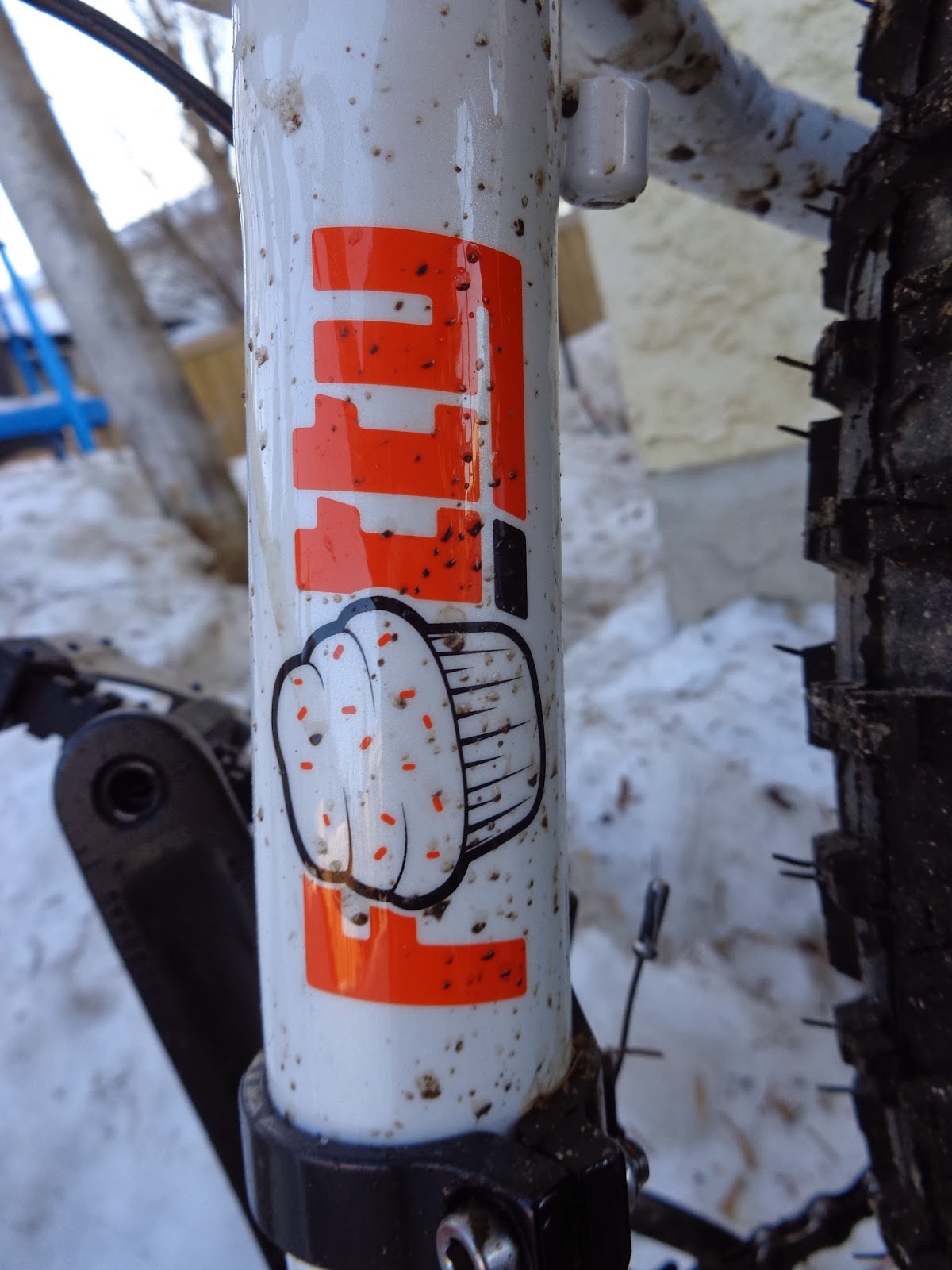 At this point, I won’t even pretend that I can offer much useful feedback on how it rides. I will have to get some miles under it and test it out on a variety of conditions before I’ll be ready to pronounce on that side of things. (I’ve only ridden it on packed snow; we haven’t had a dump of the white stuff since the boxes arrived. Can’t wait.) But there are a couple of things I can report on.


First, I like looking at it. Damn, it’s a handsome machine! The orange and white paint job with black components is a classy look, kind of old-school-Baltimore-Orioles home-jerseys. Especially when the bike is viewed against a snowy trail—it looks sleek, light, and somehow naturally suited to the surroundings, the way a hare’s white winter fur blends with its environment. (Now just imagine that hare with an orange racing stripe—maybe not Nature’s way, exactly, but wicked-stylish nonetheless.)

The most striking feature of the On-One Fatty frame is the twin top tube. This is an old design that seems to be making something of comeback in certain sectors of the cycling world. On a fat bike it makes a lot of sense, both technically and aesthetically.  The fatty is a big, wide, heavy machine, and that split top tube has to provide some extra stability. Plus, it seems to offer a more natural transition between the thickness of the tires and the frame. 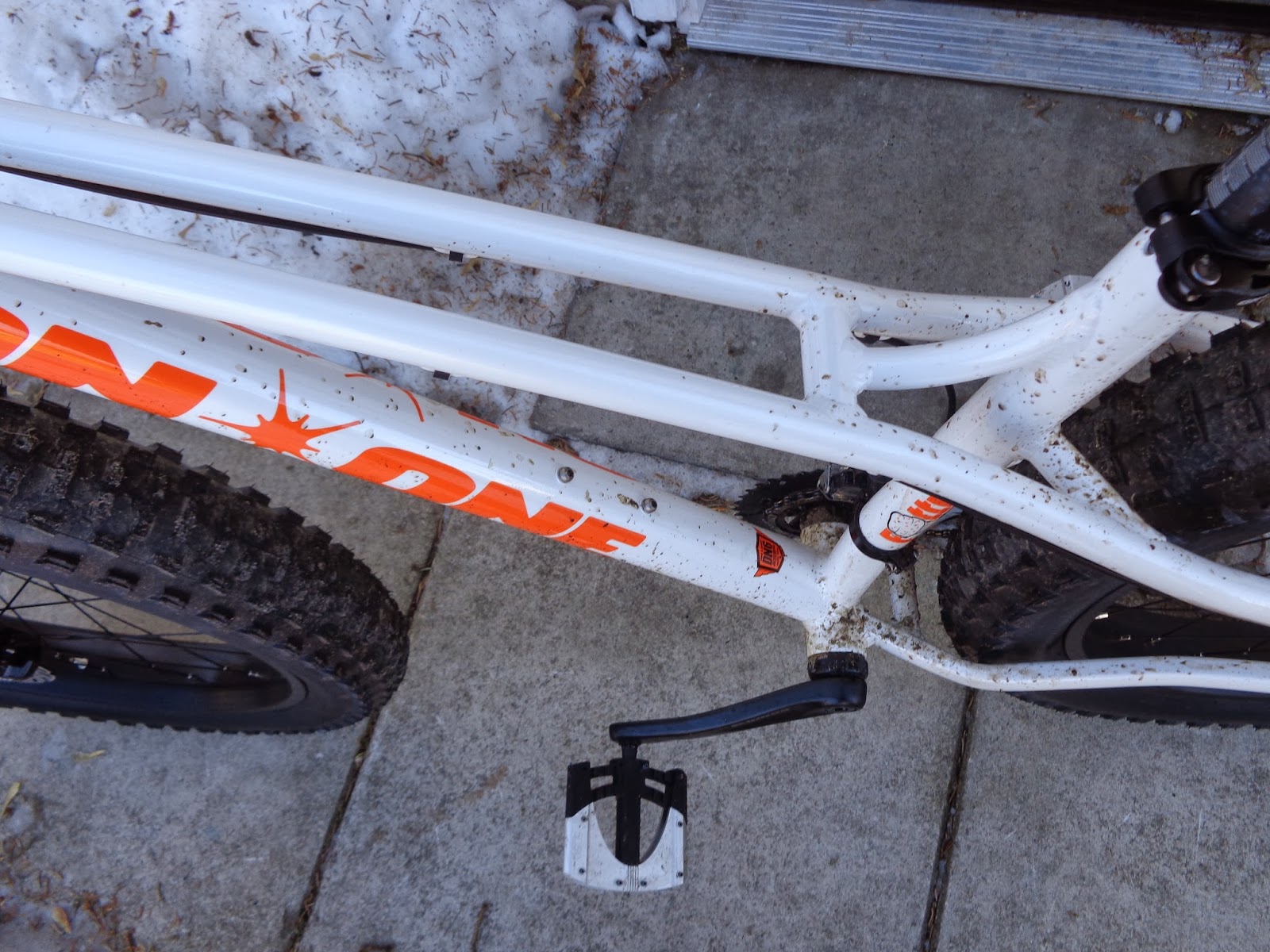 Much as I like it, though, the design is a problem for my hitch-mounted Yakima bike rack, which has mounting clamps for top tubes for two bikes. I had to use both clamps, one for each side of the split tube, in order to get it on the rack. Effectively this means when I’m carrying my fatbike on the rear rack, that’s all I’ll be carrying. (I will have to inquire about fat-compatible clamps.)

The other thing I really notice while riding is the long-ass El Gaupo Ancho handlebars. After I assembled the bike in my basement, I had trouble getting it up the stairs, the handlebars stuck out so far. In fact, they are so crazy long, I felt like I was riding the Texas longhorn cycle I once saw at a bike shop in east Austin. I suppose the idea with such a wing span is increased stability, and I’m getting used to this wide-open, spread-eagled positioning. We’ll see if it grows on me.

My overall first impression of the On-One Fatty is that it’s a serious, thoughtful fat bike. Some of the other fat bikes out there in the same price range, such as Kona’s or Norco’s or bikesdirect’s, have a whiff of knock-off models, me-too attempts to cash in on the current rage for all things fat. Those models not only have inferior components, they don’t seem to have a lot of thought or research behind them. The On-One, however, looks and feels like it was made by a company that has put some energy, consideration, and effort into the design and testing process.

The other thing I can comment on is the experience of ordering the bike online and dealing with an overseas delivery. This was a first for me, and, in general, it was a smooth and easy process. The bike arrived about 20 days after I ordered it, and it survived the journey unscathed. My only complaint with On-One has to do with duty charges. Fat bikes are shipped in two boxes, for obvious reasons, and in my case, I got charged full duty on both boxes, due to the shipper putting the same value form on both parcels. (The box with just one wheel in it was assigned a value of $1800 so the duty charge for that box was based on that amount.) In effect, I got charged almost twice the duty I should have. (I’m appealing the charge; we’ll see what happens.) Seems to me that On-One should enough experience shipping two-box-bikes that they shouldn’t make such a mistake.

Still, even if I end up paying an extra $100 duty, the On-One Fatty feels like good value.
Posted by Jasper Gates at 11:58 AM