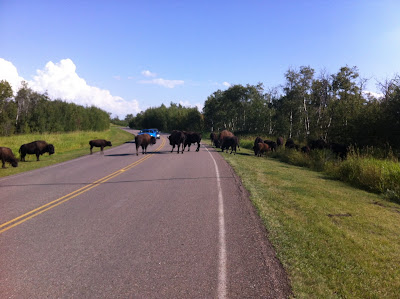 “Bison don’t like bicycles.” These are the ominous words in my head, spoken to me last summer by a National Park ranger. Val and Penn and I are staring down a gaggle of shaggy bison in the middle of the only road through Elk Island National Park, 60 km east of Edmonton. We stand there, the bison and the bicyclists, sizing each other up for a good 10 minutes. The two sides quickly reach the same conclusion: bison are enormous; humans, not so much.


My pitiful bell only seems to pique the animals’ curiosity; our hollers make no impression at all. One beast drops a giant crap-pile on the road as it looks through me. Riding up to—never mind past—the bison doesn’t seem like a good idea. So we wait from a safe distance, and eventually a park ranger drives up in a pick-up and offers to escort us past. “I’ll keep the truck between you and them. Just drive as fast as I do until you’re past them.”

We three are early into a 200 km randonnée (my first), on a route which passes through a series of small Ukrainian towns and runs twice through the national park. (Despite its name, the park is known for its free-range bison; I’ve never seen an elk there.) It’s an unusually hot Saturday in late August. My semi-official brevet card (piece of paper printed off the internet, really), sits folded in my back pocket. The theme for the ride already seems to be asserting itself: big ride, big things. 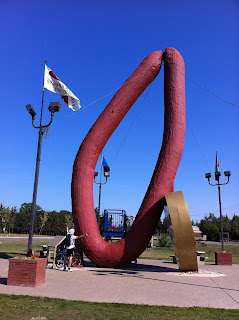 The town of Mundare, at the 85 km mark of our ride, offers the world’s largest farmer’s sausage or kielbasa, to use the Ukrainian term. Standing upright, in the centre of town, it is a startling and somewhat disturbing sight. I can sort of understand why the town fathers went for a vertical presentation; placed horizontally, a sausage can look a lot like a turd. But in a vertical state such as this, the coiler is less fecal seeming; instead it looks a bit like an eyeless snake being charmed into an upright position, ready to strike at cyclists or other pedestrians stopping to pose for a photo op. As I pay my respects, I wonder what the locals really think of this. Are they proud? Embarrassed? Both?

Mundare is, uber-sausage notwithstanding, actually kind of charming. The downtown streets have been recently spruced up. There’s a Groceteria, one of those unfortunately named small town catch-all stores. This edition features a bakery that also includes a used book section, and a freezer full of frozen perogies, no doubt crafted by church ladies.

North of the big kielbasa, we are now firmly in Kalyna Country, as it’s called, and almost every intersection features a sign pointing to a tiny Ukrainian orthodox church down a gravel road. We see a few of these on the main highway, elegant little onion-domed cathedrals. I make a cartographic note to come back here some day with my gravel grinder. 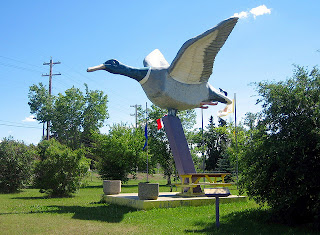 Next stop, km 117, is Andrew, Alberta, an even smaller village. But it too has something big to boast about: the world’s largest roadside mallard duck. Really. Nothing disturbing about this guy though; maybe giant animals are just easier to pull off than enormous inanimate food objects. The mallard, like much of Andrew, just looks a bit sad, tired, in need of a fresh coat of paint and some youthful laughter. 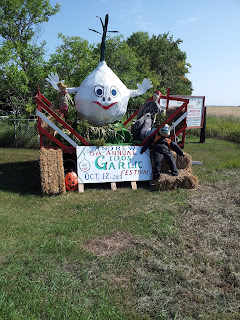 The village is sleepy for a Saturday; for sale signs are on every restaurant in town. But something’s going on. A woman we ask to sign our brevet cards tells us about a borscht festival going on a few blocks over, complete with babas and perogies, but we can’t seem to find it. Instead, we keep running into versions of creepy giant garlic dude, constructed out of lacquered papier mache. No wonder Andrew is bereft of young people. They’ve been so terrified by Garlic Man that they’ve fled to the big city.

The town of Lamont (whose motto “City Living, Country Style” is at least half accurate) is our century mark, 100 miles in, and we take a break at the Burger Baron. In our heat-induced delirium we decide that milkshakes are a good idea. The milkshake gal signs our brevet cards like she’s done this a million times. The food may be Burger-Baron mediocre, but the air-con is first class. We linger a bit.

Coming back through Elk Island, we are stopped again by the damn bison on the road. There’s a long line up of cars waiting for the herd to move along. It’s a big park. Do the bison really need to hang out on the road? Penn is getting impatient with this, and I see his rodeo past combining with fatigue to make for a dangerous plan.  Time to show these dogies who’s boss, he’s thinking. Just when I think Penn’s about to leap off his bike and onto the back of a woolly bison, the beasts decide of their own accord to trample off into the bushes, and we resume the home-stretch, out of the park and back toward Ardrossan.

The milkshakes now seem like a very bad idea, in fact. But we’re not going to let a bit of milky in-mouth vom slow us down, when we’re so close to the end. We crank out the final clicks knowing that, back in the city, in an hour or so, we will unfold our sweaty brevet cards, wipe the dust off our brows, clink glasses, and tuck into the world’s largest plate of nachos.
Posted by Jasper Gates at 9:40 PM