Vélivre: A Thread of English Road 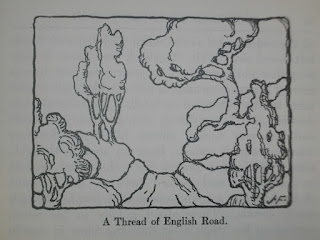 In A Thread of English Road (1924), American Charles S. Brooks, author of numerous forgotten travel books and plays (including the strangely neglected Wappin’ Wharf: A Frightful Comedy of Pirates), travels quietly by bicycle around villages of southern England, with two companions, rambling along the back roads between London and Bath. Not much happens on the trip. They encounter neither “high excitement” nor “raw adventure.” In fact, “Our days were as tame as a kitten by the fire,” he admits on the second page. This volume is more of a mood piece; Brooks’s prose and Julia McCune Flory’s illustrations capture the quaint pace and gentle air of 1920s rural England. Although at times the book feels a little too tame (some readers may wish for a frightful pirate or two), it has its moments, stringing together some memorable beads on its “thread of road.” 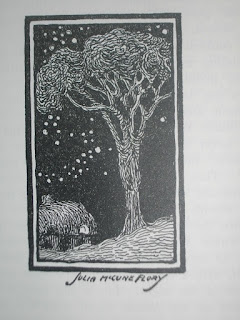 Brooks is fond of English village life and the English countryside in the way that only a non-English city-man could be. (He was from Cleveland.) Hedges and hearths, narrow streets, old doorways, country inns—these quaint, authentically English details are what he’s after, and I suspect there was in the 1920s an appetite in (urban) America for such vignettes of idyllic English village life, which most Americans knew only from books, novels by Eliot and Hardy. For Brooks, there’s a sense that most things English (except, perhaps, breakfasts) are just–-better.   English villages—the architecture, the characters, the roads—just have more charm; even the dogs in England “are more civilized, gentler than their cousins in America.”

A big part of the appeal of the book for me is Brooks’s deeply literary bent. The book is as much a celebration of literature about English villages as about the villages themselves. In fact, the volume is a late contribution to the popular nineteenth-century tradition of literary pilgrimages, wherein bookish pilgrims set out to visit the birthplaces, haunts, homes, and graveyards of famous writers, from Shakespeare to the Brontes to Dickens and Hardy. 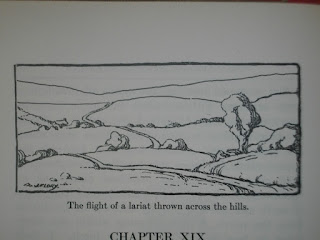 Interestingly, there is a cycling offshoot of this tradition in the late nineteenth and early twentieth centuries. In fact, cycle-travel accounts by the Pennells in the 1880s (in the footsteps of Chaucer, Stevenson, and Sterne) and F.W. Bockett in 1901 (Jane Austen, Percy Shelley, Charles Lamb), in particular, make a case for cycling as the ideal means for such literary pilgrimages. Brooks is a kind of hybrid descendent of the two, combining the American-literary perspective of the former with the eccentric style of the latter. 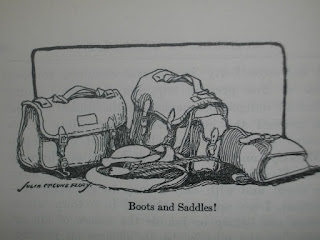 The pages of are fairly studded with allusions to novels about the English countryside. On page 14 alone Brooks makes reference to works by Dickens, Fielding, Smollett, Sterne, and Richardson! So nerdishly literary is Brooks that he indulges in a few clever-silly stylistic experiments that literary geeks will appreciate. For instance, one amusing chapter is written in the voice and manner of Samuel Pepys’s 17th-century diary. Another alludes to Fielding’s playfully ironic chapters headings with the subtitle “A Dull Chapter to Be Skipped.” (After a few pages, I did just that.)

While there’s little in the way of incident in the book, it does offer oodles of style. Brooks knows his way around a sentence, and loves to show off a playful sort of wit, which can occasionally veer into mauve, if not purple, territory. He is the kind of deliberately old-fashioned writer who sees no point in writing “sun” when “the eye of Phoebus” will do.  But at times, he strikes an economically poetic note, such as in this account of the end of a full and glorious day of cycling: “And so to sleep! And I dreamed that I rode my bicycle seven times around the moon and climbed a hill to find Orion at the top.” 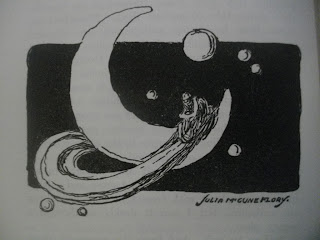 For long stretches of this book, however, it’s easy to forget that Brooks is travelling by bicycle at all. He goes for chapters at a stretch without even mentioning his mode of travel. Then he’ll refer to the odd “tyre puncture” or praise his new cycling “rain cape” (take note, Rivendell!) or report that an innkeeper looked down his nose at their dusty “cycling tweeds.”
But he does make a point of noting, with wonder, that the bicycle is still widely used in England unlike in America, where it was, by the 1920s, “on the dodo’s darkening path,” having been squeezed out by motorcars much more completely than was ever the case in Europe. Brooks is excited to see regular folks, carpenters and plumbers, riding their bikes to and from work, “cheese and pie [hanging] upon the handle bars.” And he is astonished by the sight of an “old gentleman in respectable silk hat pedaling a tricycle across the country without blush or apology.” In America, he explains, only a child would be caught riding such a contraption. 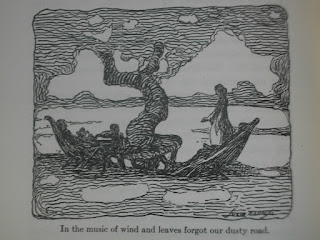 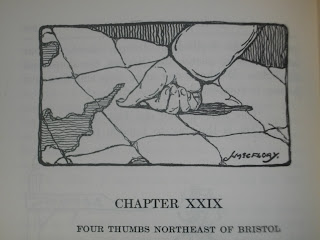 So while it may not be worth reading the book for “raw adventure” or cycling content, I’d recommend picking it up for one other reason alone: the terrific illustrations by Julia McCune Flory. As was the custom, the illustrator Flory (and her husband, Walter, a Cleveland lawyer) accompanied Brooks on his travels, making illustrations en route. Flory employs a thick, often shaggy line in her simple, whimsical pen-and-ink sketches. They perfectly compliment the quirky, nostalgic tone of Brooks’s writing while at the same time feeling surprisingly modern somehow.

This is fitting, since A Thread of English Road has an out-of-time quality; it feels like it could have been written in 1904 or even 1884, rather than 1924. As Brooks himself knew, there can be something timeless not just about an English village but also a book about English village life—even if, maybe especially if, it’s written by an American.
Posted by Jasper Gates at 8:50 PM