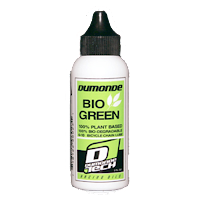 When the subject of chain lube comes up, I am generally a pure agnostic. A simple Google search will reveal a plethora of heated, perpetual, and simultaneously partisan and inconclusive discussions about which little bottle of oil is the right one.  My position, generally, is that your chain needs oil and as long as that oil shows up regularly, it doesn't really matter which oil you use. As a result of my not particularly caring about what oil I use, a lot of little bottles have come through my garage.  Given that background, I figure the bottle I grabbed for my trip from Vancouver to the Mexican border deserves a little write up.


Setting out, as we do, on a fresh drivetrain, the 2,000-mile trip seemed like a fine place to evaluate the merits of a new chain lube. I think, generally, the trip lived up to expectations. We rode for twenty-eight straight, back-to-back days in a coastal climate. The route had plenty of sand, fog, and salty sea air, and not too much in the way of drenching rain. It also featured endless short, steep climbs which, on a fully-loaded touring bike, guaranteed that the chain led about as stressful a life as a road-bike chain will experience.

To spoil all narrative suspense: this stuff is fantastic.

The thing I look for most in a lube is durability; the more miles I can ride between reapplications  the happier I am. This is doubly, or perhaps 2.5 times, as important to me when I'm touring and have other things on my mind.  I also prefer that my lubricants not leave a lot of build up on my running gear, as a trapping a bunch of grit against the moving parts of the drivetrain seems to defeat the purpose to me.  The Dumonde excelled in both categories.

In terms of durability, I was regularly clocking 300+ miles between applications.  Dumonde advises that one "Re-apply Dumonde Tech G-10 Bio-Green only when you begin to hear your chain; sound, not appearance or time, is the best indicator of when the chain needs a reapplication of G-10 Bio-Green." About halfway though the tour, I thought I might be able to harvest a blog post from my endeavors, so I put the sound thing to the test. That time, there were 733 miles between the applications.  But I'm not abusive to my gear, so I stuck to reapplying somewhere between 300 and 400 miles, regardless of sound.  I'm quite happy with that.

In terms of cleanliness, the Dumonde kept things fairly tidy. There was no thick black gunk clogging my pulleys or flaking off of my chainrings.  Granted, the chain wasn't particularly sparkling, but I can't see caring about that. That's the sign of a bike that rules the garage--I always prefer my gear to bear some marks of exertion.  Aside from the condition of the drivetrain, though, was the ease with which I could reverse it. After getting back to my shop, I took a toothbrush and some dishwashing soap to the cassette and had it sparkling inside of five minutes.  Compared to the usual routine of degreasers and mineral spirits and soaking and scrubbing, cleaning the Dumonde-treated equipment was a revelation.

At the end of the tour, the chain was worn exactly as much as I expect a chain to wear after 2,000 miles under Clydesdale with a touring load.  No more and no less, which is about all I expect from a lube. Taking the soap-and-water cleaning routine and the long reapplication interval, I'm perfectly comfortable recommending Dumonde G-10 to others.  So go ahead, give it a shot.