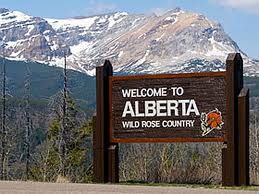 Here in sunny Alberta, far from Oprah-land, we’re pretty excited about pro cycling these days, because of a major announcement made late last year: the creation of a new professional cycling stage race, the Tour of Alberta, which will take place September 3-8, 2013. According to the T of A website, this will be a UCI-sanctioned 2.1 (whatever that means) event, featuring 16 teams, including eight international teams. The race will start in Edmonton and cover about 850 km before finishing in Calgary; the route will include “open prairies, rolling foothills, and . . . majestic Rockies,” with most of the stages taking place in rural Alberta.

Its promoters, who claim the T of A will be the premier pro cycling event in Canada (not much competition for that claim), are clearly hoping for the kind of recent success enjoyed by western-American pro stage races such as the Tour of California, the Tour of Utah, and the USA Pro Cycling Challenge in Colorado. (As with those other western locales, Alberta’s got the two main ingredients needed for a stage race: mountains (preferably “majestic”) and not-mountains.) And it doesn’t hurt that Ryder Hesjedal has committed to taking part.

One of the most intriguing aspects of this ambitious Alberta endeavor is its attempted festivalization of pro cycling. The actual subtitle of the event is “Canada’s Pro Cycling Festival.” That’s right, “festival.” The word “atmosphere” is also mentioned a lot on the Tour website; there will be food, entertainment, and, “culture” (i.e. lots of ethnic dancing).  In fact, if you watch the promo video, you see almost as many jugglers and face-painters as cyclists. This marketing angle, although unconventional in the pro cycling world, makes a certain sense in Alberta. We do love our festivals. The very word has a way of drawing people, be it for folk music, fringe theatre, street performing, garlic, you name it. And let’s face it. To all but hard-core fans, bike racing can be kind of boring to watch. You stand around for a few hours and then swoosh; the pack sweeps past, and it’s over. But a “festival”? That can go on for days.

The big sponsor of the race/festival is the Government of Alberta, specifically the Rural Alberta Development Fund. The Tour website explains that the mission is to show off the natural wonders of our province to the rest of the world and to involve as many as 50 rural communities throughout Alberta, presumably bringing some kind of economic bonus to some of these towns and villages. This too is interesting. I wouldn’t say that there’s much of a cycling culture or appreciation of cycling as a sport in rural Alberta. In the big cities, Edmonton and Calgary, sure, there are sizable cycling communities that will be all over this event. But the organizers seem to be counting on small towns supporting the race simply because it has international prestige, even if the locals don’t know a peleton from a half-ton.
This may not be as far-fetched as it sounds. The success of the World Track and Field Championships in Edmonton in 2001 shows that Albertans are capable of coming out en masse to support non-mainstream sports events, if only because there’s some kind of international prestige attached. The difference this time, of course, is that the organizers are counting on support from rural Albertans especially, and I’m curious to see if the province's townsfolk come through.

Here at The Dusty Musette, we love rural Alberta and frequently celebrate its charms and endless, if not exactly “majestic,” possibilities for cycling bliss; we’re always up for a festival too. Strangely, the Musette squad has yet to receive its formal invitation to the race. But we’re getting ready anyway. Eating perogies, walking on stilts, tying balloon animals, fancy dancing. Come September, we’ll have our game, er, “festival,” faces (painted) on.