They call me the Cartographer. By “they” I mean my regular riding partners, the other two Museteers, Val and Penn. It’s a half-joking reference to my default role as designated route-finder. In all honesty, it’s a role that I relish: creating well-designed ride routes that meet all the criteria of a satisfying semi-serious spin. That would include low traffic roads or ones with generous shoulders, few stoplights, scenic views, and, of course, a coffee stop located somewhere close to the midpoint. My tools are web resources like mapmyride and Gmap, the trusty Alberta Road Atlas, word of mouth, and, of course, old fashioned trial and error.


I’m not saying I’m any better at route-finding than Val or Penn. I just enjoy doing it, and take a certain pride when it works out, say when I lead the lads through quiet, winding residential streets or down some sleepy back alley. (The more serpentine and wiggling the route, the better, I say.) And if I can work in a traverse of a grassy field or gravel path or perhaps a full-on portage over a stream or barbed wire fence, so much the better.

Conversely, I feel a small share of shame when a new route doesn’t quite work out the way I’d hoped, when the traffic is heavier than I thought it would be or the views disappoint. The fellows humour me, for the most part; they accede to my cartographic whims and rarely say anything critical about my work. But there is a certain responsibility borne by the cartographer. I have to admit I have lain awake at night thinking of cycling routes. Cartographers have reputations to uphold.

I’ll never understand why so many riders opt for boring, traffic-laden routes when they just don’t have to. Like F.W Bockett, I shake my head at cyclists who insist on grinding along busy main roads. Bockett preferred “byways and lanes.” As he observed in 1901, “It is in the shady depths of these narrow winding ways that the real delight and romance of cycling commences.”

My last day in Austin, Texas, this past week, I rented a good road bike from Mellow Johnny’s (Lance Armstrong’s store) and put my fate in the hands of an unknown cartographer. The rental counter dude handed me a sheet (actually four sheets, stapled together) with maps and cues, a mapmyride called Spicewood-Jollyville Loop, 38.9 miles. At first, the cues looked overwhelming; there had to be 70 turns in this route. Since I knew little of Austin, I’d be constantly checking the damn sheet. Would I even see anything? Despite my reservations, I decided that I had best trust the cartographer. 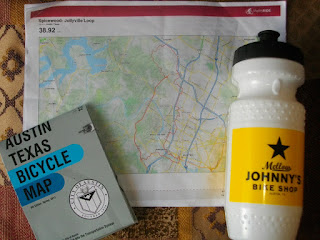 A few days previous I had gone out exploring with just a map (a City of Austin cycling map, no less), thinking that with my cartographic skills I could eschew a formal cue sheet and just figure out a pleasant route. Big mistake. Things started out just fine, but only when I couldn’t find some of my turns did I realize my map was from 2005. Things had changed in West Austin since then. I ended up on some ugly and dangerous roads before eventually finding my way back onto a recognizable bike route.

This time, though, I had a local cartographer on my side. And within the first 5 miles, I realized I was in the hands of a master. The route was ingenious, linking bike-laned road to bike-laned road, twisting through residential neighbourhoods, avoiding lights and stops so elegantly. Even the stretch along the major highway (which I had been highly skeptical of) turned out to be surprisingly pleasant, with a huge shoulder and spectacular views of the West Lake Hills.

Plus, unlike my experience in south-west Austin the week before, here there was no garbage, no roadkill, even. It was as if the cartographer had seen to it that this route was kept pristine. The cues were obvious too; following the route was effortless. This cartographer was a veritable Yoda of the roada. So powerful was his or her magic, I barely had to think about where I was going—some kind of force guided me along.

Just when I started thinking that I could use a coffee, there appeared up ahead, as if in a mirage, a Krispy Kreme. Then the final stretch, the finale: a dazzling, zig-zaggy ride back into the heart of downtown, ending up on the Lance Armstrong Bikeway along the Town Lake. Masterful! At that point, I wouldn’t have been surprised if the cartographer had arranged for Lance himself to be waiting to shake my hand.

I don’t know who my Lone Star cartographer was but I do know that routes like this don’t get created without hard work, passion, and a little art. I know now just how brightly shines the work of a truly fine route-maker, and I feel humbled in my own meagre efforts at mapping out a loop. I tip my cap to you, good sir or madam, and say thank you to all the cartographers out there who help bring out the delight and romance of a good ride.
Posted by Jasper Gates at 1:58 PM