The Call of Ventoux, Part One

“Watch out for the crazy Belgians.” That was the advice of Bernard, our genial Swiss host at the lovely gite my family had rented for a week in the Vaucluse, a northern department of Provence.  After being there for a week in early July, I had announced my intention of cycling up Mont Ventoux, the Giant of Provence, one of the most famous mountain climbs in Tour de France history. The Belgians had also come to cycle up Ventoux, Bernard explained, but they were doing it three times in one day, as part of an annual Cinglés (that is, “Madmen”) du Mont-Ventoux pilgrimage. 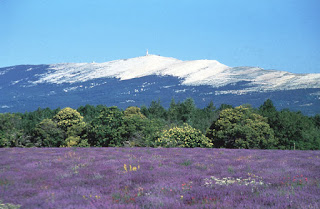 “The Ventoux” (as it’s known by pro riders) is an enigma as far as French mountains go. Geologically, it is considered an Alp, but in truth, it is something of a freak, standing alone hundreds of kilometres from the nearest mountain of similar size. It dominates the landscape of the Vaucluse; you can see its bright white peak from almost everywhere in the region. At first glance it seems snow-capped, but that’s just the bare white rock of the flora-less, moon-like summit.

When the Italian poet Petrarch climbed Ventoux in April of 1336 (on foot, not bike, of course) he claimed, “My only motive was the wish to see what so great an elevation had to offer.” But the pull of Ventoux was, and still is, about more than a sweet view. Petrarch went on to say that growing up in the distant shadow of Ventoux, the mountain was “ever before my eyes” and he had dreamed of climbing it for as long as he could remember.

After only a week in Provence, I could relate. I had gone to the south of France for a family vacation, not intending to do any serious cycling. (I didn’t bring my bike, but since I knew we would be near Ventoux, I did bring my shoes and shorts—just in case the planets aligned and I found a bike rental place and some time to spare.) Everywhere we went in the Vaucluse in our rented Renault—to Roman ruins, picturesque medieval villages, lavender fields—the white-capped peak seemed to be beckoning, calling me, taunting me even. Every time we drove by the bike rental place in the village of Malaucene, at the foot of the mountain, I felt a visceral pull to stop our rental car, grab a bike, and just go—up.

And obviously Petrarch and I aren’t the only ones who have felt the call of Ventoux. It is a pilgrimage site these days for cyclists not just from Belgium but around the world. On any given summer day, hundreds of cyclists, of all shapes, sizes, and levels of fitness cycle up it only to come right back down. Although some other climbs in France may have more storied Tour de France associations (the Alpe d’Huez or the Col de Tourmalet, for instance), cyclists seem especially drawn to Ventoux, for a bunch of reasons.

I suspect the main appeal is the suffering. Ventoux is just so damn hard. Lance Armstrong has called it the most challenging climb in France.  In the French system of classifying the difficulty of bike-race climbs on a scale of 1 to 4, Ventoux is classified as an HC—what the Tour de France considers an hors categorie, or “beyond category” climb—in other words, off the scale. From Bedoin (generally considered the hardest of the three possible ascents, and the one used on the Tour), the grind is 22 km long with an average gradient of 9% over the final 16 km, including that final stretch of the lunar summit where the wind blows at 90+km/h for 240 days of the year. The record wind at the summit is 320 km/h.
Given that it’s such a relentless bastard of a climb, it’s not surprising that Ventoux has been the site of much Tour de France drama over the years, including the famous duel between Armstrong and Marco Pantani in 2000, Eddy Merckx’s dramatic stage victory in 1970 (he had to be taken straight to the hospital following his win), and, most infamously, as Tour fans know, in 1967, British rider Tom Simpson actually died on the mountain, collapsing during the race, not far from the summit.

Le Ventoux, then, offers the cycling pilgrim a chance to experience some Tour de France mystique together with some high-end suffering—and after all, isn’t that what all pilgrims seek? That unique ecstasy of pain endured, the promise of transformation through suffering?

I had been expecting to see cyclists in the Ventoux area, sure, but I was amazed by just how many I encountered on the roads connecting the villages of the Vaucluse. (And you can’t miss them. They’re almost all decked out in colourful jerseys—pinks and lime greens that only Europeans can pull off.) On the stretch of road between Malaucene and Vaison la Romaine, near our gite, you couldn’t swing un chat out your car’s passenger window without hitting spandex.

However, most of the cyclists I saw riding the valleys around Ventoux didn’t appear particularly happy to be there. Pilgrimage is serious business for most of them, I suppose. I saw mostly small packs of cyclists focused on pace, pace, tempo—all ass and wheel—oblivious to the marvels of Provence’s countryside. These Uber-Serious Euro-Roadies, most of whom rode outrageously expensive bikes and were decked out like gaudy peacocks on wheels, struck me as self-absorbed, overly serious, and generally unlikeable. Their grim focus only seemed to lapse at the end of the day’s work, when hordes of sunburnt, dishevelled, gob-and-snot encrusted cyclists could be found whooping it up at the outdoor cafes of Malaucene, celebrating their conquest of the mountain. Crazy Belgians, no doubt.

After a couple of days of watching this out my car window, I decided it was time to see what the fuss was all about. I rented a hybrid bike and bought a map and headed out for a spin—not to climb Ventoux, I told myself, just to explore the Provençal landscape. I didn’t realize it at the time, but what I was really doing was casing the climb, sizing up Ventoux for later in the week. 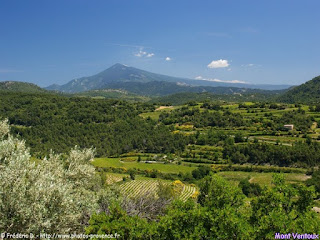 The instant I hopped on the rental I remembered all the things I love so much about cycling in rural France: the fabulous roads, the picturesque landscape, the generally courteous drivers, the civilized presence of cafés and boulangeries in perfectly spaced out villages. I spent the day cruising the tiny twisting back roads, going up and down the short steep climbs, admiring the cherry orchards, ticking through charming village after charming village. I didn't see any other cyclists on these back roads. From time to time, I’d glance over at the lunar peak of Ventoux, which seemed to be mutely marking me. At mid-day, when the sun was soaring, I stopped by the gite and swam with my kids for an hour before heading back out for more. It was pretty much a perfect day of cycling.

I’m not sure at what point in the day I made up my mind (probably within moments of getting on the bike), but by the time I got back to the rental place, I knew I was ready for the Giant. At the end of the week, I would be going to the moon.