The Call of Ventoux, Part Two

No one ever talks about the middle section of the climb up Ventoux. Accounts of the ascent tend to focus on that final seven kilometres: summit, summit, wind, summit, moonscape, summit, wind, summit, Simpson, summit, eerie, summit. Summit. For obvious reasons—the top of Ventoux is unique, memorable, ominous. But, as anyone who’s ridden up that mountain knows, the hard part of the climb, on most days, is not the summit. 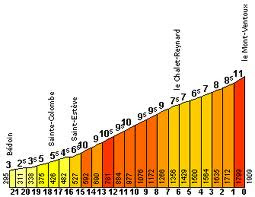 No, the truly punishing, dark soul of Ventoux, where the real damage gets done, is the middle third, where the grade kicks up to a nasty 10% for a relentless 8 km of twisting forest road. I wasn’t going fast, and I took several rest stops, and still this stretch gave me a taste of the bitter and merciless forces of gravity.  My quads will never forget it.

I had set off early that morning, resolving to beat the heat and the hordes of pilgrims I was sure I’d see. I decided on the ascent from Bedoin, the hardest of the three possible routes, and the one that’s used in the Tour. If I was going to do it, I figured I might as well do it right. By 7am I had fuelled up on pain aux raisin and espresso and was at the base of the mountain ready to go.

After seeing the pilgrim mobs all week, I was prepared for the masses. But they must have still been asleep, because I only saw six riders the whole way up. This I found oddly disappointing, for I suppose I was hoping for some company in my suffering. On one of my roadside rest stops I got excited when I heard the voices of approaching cyclists, two Italians as it turned out, decked out in bright blue and pink. I looked up to greet my fellow pilgrims, with eye contact at least, some non-verbal acknowledgement of our shared mission, but they didn’t even look at me, only metres away. Had I forgotten to disengage my cloaking device?

Damn them! I hopped on my bike and tried to chase them down but couldn’t. Each time I got within a few bike lengths, the buggers would speed enough just enough to drop me off their wheels. Bastards! I thought and fell back into a more sensible, semi-serious pace. 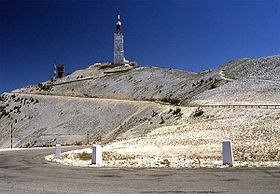 Emerging from the forest, I quickly forgot how messed up my legs were, for I was suddenly on a different planet, a strange desolate world of white rock. Here I met up with a friendlier pilgrim. I enjoyed the company of a 70-year-old Brit from the Shropshire Wheelmen Cycling Club for these final kilometres.  (He is typical of the cycling demographic these days, in France and England, anyway. Most of the cyclists I saw were over 50, many quite a bit over 50.) He was incredibly fit, a serious club rider who raced every weekend, and had climbed Ventoux several times. In fact, he was on the first of his planned three ascents of Ventoux that day—a kind of honorary Belgian, I suppose. Together we ground our way up the final kilometers of moonscape, parting ways near the summit when I stopped to check out the Tom Simpson memorial. 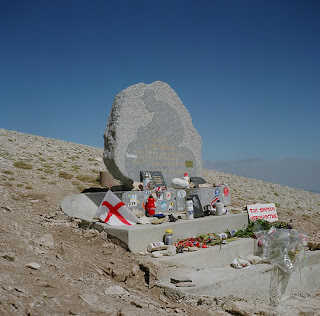 Simpson’s story is the stuff of myth and tragedy. He was the great British hope for bike-racing in the 1960s, and his death on the mountain in ’67 shocked Britain and the cycling world. Although there are many theories on exactly what happened, the consensus now seems to be that he was done in by a combination of drugs, alcohol, dehydration, and over-exertion. Legend has it that when he collapsed near the summit, Simpson, in a delirious state, implored his handlers to “Put me back on the bike.” They did, he wobbled another hundred metres, and then collapsed again, this time for good.

To me, the simple memorial, surrounded by water bottles and other tokens left by pilgrims, seemed a kind of monument to the sublime, as much as to Simpson himself. It’s a reminder of how the vastness and harshness of Ventoux’s peak can both terrify and thrill us by making us seem so puny, insignificant.

When I reached the summit, it was calm, clear, sunny, hardly any wind at all. The view was spectacular, stretching to the Mediterranean. Petrarch, who also got lucky with a clear day in 1336, claimed he could see as far as Italy, and I believe him.

Just before the tippy-top, I stopped at the small café and mistakenly, through some linguistic error, ordered two coffees. I suppose the server-girl thought I was meeting someone. No matter. As I sipped them on the patio overlooking the impossible vistas, I resolved that the double café would be my new signature move.

The weather up there was a trick, of course, meant merely to lure me back to the Ventoux, to climb it again, like the Belgians, perhaps only to witness the darker side of the mountain’s personality. It was only afterwards that I felt some disappointment in the lack of a maelstrom at the summit—that was supposed to be part of the pilgrimage, wasn’t it? 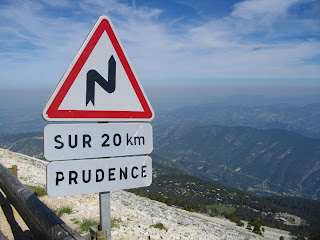 Descending  cautiously (“like a married man,” the pros would say) in the late morning, I had a good view of fellow pilgrims grinding up from the Malaucene ascent, and here, finally, were the hundreds I’d anticipated.  The quantity and diversity of them amazed me. Sure, there were some serious riders, but  most of them opt for the Bedoin route. Unlike the snob cyclists I’d seen in the area for the past week, most of these riders looked like regular folks. Most were on rented bikes; some weren’t even wearing spandex. One Germanic dude was sporting sandals. And there was all manner of huffing and puffing, red-faced exertion going on. Some were already standing on their pedals, even though they were less than a quarter of the way up. But many of them were smiling none the less; they were doing something they’d dreamed of. 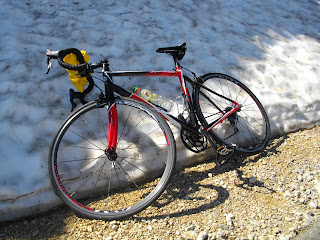 I suppose I—in my baggy shorts, with my stuff sack bungeed to the handlebars of my rental—was an encouraging sight. If that guy can make it to the top, so can I! Just a few more hours of this suffering, and then I too can make that glorious descent! Maybe we’ll all meet up later on the café patio in Malaucene, where we pilgrims can raise a glass together in acknowledgement of our accomplishment.

As I flew down past the trail of ants creeping up, I found myself asking: Why? Why do they/we do it? What compels people to ride their bikes up this mountain?

That afternoon, back at the gite, I told Bernard about my climb up Ventoux. Something almost imperceptible changed in the way he looked at me. He confessed that he doesn’t cycle much anymore (motorcycles are his thing now), but he does dust off the bike and go up the mountain once a year. It’s something many locals do, he explained. I guess that even when you live so close, the call of the mountain, on some low frequency, never fully goes away, no matter how many times you heed it. If anything, it might just get stronger.
Posted by Jasper Gates at 2:23 PM