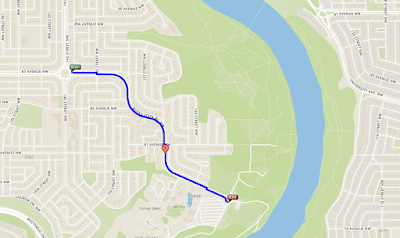 Riding up and down Buena Vista Road is something I would never do in July. Or even May. Not a chance. But in March? I’ll take it.

The road is only 1.5 km long, running from the traffic circle at 142 Street and 87 Avenue down the hill to the tiny traffic circle by the Valley Zoo and the Laurier dog park. But it’s a pleasingly twisty hill and a ridiculously wide road--two lanes each way for a volume of traffic that would easily fit in one, essentially leaving the curb lane entirely for cyclists.

But here’s the thing: BVR is, somehow, always the first snow-and-ice-free road in West Edmonton. In mid-March, when residential roads are still covered giant amoebas of two-inch-thick ice and the clear arterial roads still have a two-foot-wide esker of gravelly ice where bikes would normally travel, BVR is the best option for road cycling. True, it’s just up and down, but at least you’re riding on a road. And after a long winter of fatbiking on trails and sidewalks and spinning away indoors, who doesn’t get the itch to get out on an actual road come spring?

Of course, hill repeats are the worst--the Sisyphian lane swims of cycling. Normally, I ride my bike to go places and see things; hill repeats allow neither. And nevermind that there’s no actual “vista” at any point on this road, let alone one that’s “buena.” Maybe there was, at one point, 60 years ago, a clear prospect of the river or the valley, but not anymore. The name is a tease.

It’s also true that BVR is often wet this time of year, as meltwater runs across and down it. But who cares? It’s road-bike ready. Put on your damn splash pants and ride. Because in March, for a few weeks, this is Buena Vélo Road.