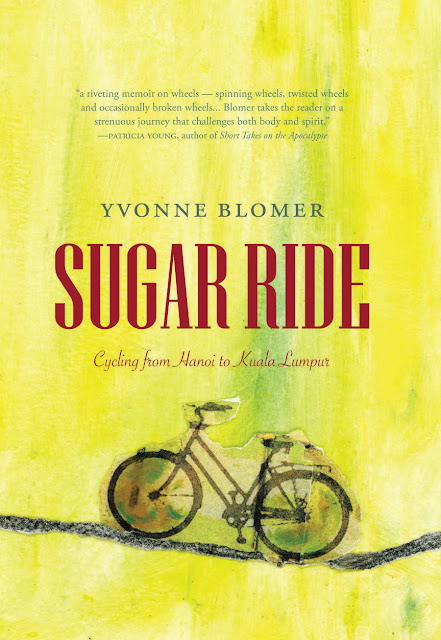 I’ve got to be pretty much the perfect reader for Yvonne Blomer’s literary travel memoir Sugar Ride: Cycling from Hanoi to Kuala Lumpur (Palimpsest, 2017). Not only am I a touring cyclist and type-one diabetic like Blomer; I’m also an English professor who’s fond of poetry and literary travel writing. No wonder no less than five different friends offered me copies of the book. And no wonder I like it so much.


Sugar Ride covers a three-month trip by Blomer and her partner, Rupert Gadd, in the fall of 1999. The long gap between when the trip happened and when the book appeared is explained in the Acknowledgements, where Blomer says that the manuscript got “swept up” in a prolonged poetry phase and a detour through grad school in England. The time lapse isn’t a big deal, since Blomer’s account is mostly concerned with her impressions of the landscape and people and cycling experience rather than any specific political context. These places have changed a lot in almost 20 years, I’m sure, but, for the most part, Blomer’s account doesn’t feel dated.

Sugar Ride has an unusual structure for a travel volume—that is, it’s not chronological. Although the subtitle suggests a linear journey from Vietnam to Malaysia, the book jumps around in time and place, offering a series of present-tense vignettes, rather than the conventional arc of A to B, hopping between locations in those two countries as well as Thailand and Laos, and even post-trip Victoria. The effect is somewhat startling, at first, but I came to like it. Our memories of trips are more associative than chronological and that’s the effect Blomer achieves here. Reading this book is like listening to that poet-friend of yours reminiscing about random, vivid memories of her Asia trip. In a good way.

Interspersed among the vignettes are short italicized sections, journal musings, mostly in the past tense, which offer more reflection than reportage. These parts include references to an eclectic range of books, movies, and pop music of the late 90s, especially Alannis Morisette. (These do feel totally 90s.)  The italicized sections are the most impressionistic parts of the book, a kind of thoughtful post-trip parallel narrative.

Perhaps the even more unique feature of this cycle-travel book is the diabetes angle. Blomer describes the challenges that the diabetic cycle traveler faces: low blood sugar episodes, high blood sugar episodes, the frustrations of managing days off, keeping insulin cool in a tropical climate, tracking down supplies in remote areas, and, most frustratingly, having to stop and eat when it’s the last thing you want to do. I can relate to all of these. Blomer captures the obvious link between diabetes and cycling: balance.
The body is an extension of the bicycle, the bicycle the body. Years later, now, these two shadows—that shadow of my bicycle in the crevices of bone, in the sinew and cartilage of muscle the triangle shape of its frame, in the balls of the hip socket the wheels, and in the ropes of muscle its spokes. But also and more so, in those same crevices and cells there in the imbalance of sugar and the need of manufactured insulin.  The imbalance of how food and activity are processed in the body. There was another, secret, imbalance that went on. How to know the inner most secrets of the body? How to prepare?
For the non-diabetic reader, I think these reflections may well be of interest in a different way, since the struggles of managing blood sugar levels are likely something that most non-diabetics have never considered.

Blomer is not your typical North American traveler, fresh off the bike, swept away by the exoticness of Asia. Her parents were from Zimbabwe, giving her a complicated perspective on colonialism. And she and Gadd had lived in Japan for a few years prior to the bike trip, spoke passable Japanese, were already familiar with some Asian codes of conduct and somewhat accustomed to life as white minorities in Asia.

This confidence allows her to navigate some awkward moments of cultural discomfort, where her white privilege bumps up against opportunistic requests by some people she meets. These moments are tricky for any traveler, but Blomer and Gadd treat them with a mixture of sensitivity and reasonable skepticism. Only occasionally did I detect an over-earnestness about issues of privilege and colonial guilt (“Is riding my bike enough?").

You’re always aware that Blomer is a poet. The writing is, not surprisingly, lyrical, attuned to details, flashes of beauty. (At one point Blomer mentions Karen Connelly’s Touch the Dragon, a travel book about Thailand with a very similar poetic feel, which I was reminded of numerous times reading Sugar Ride.)
The same rain that we’d stayed ahead of since Vietnam is now alongside us. Pelting us. Restless, we argue, standing on the beach, about our future. Or we argue about our lack of new things to say about it. We push and pull at each other. Perhaps we are getting bored of each other’s company. Perhaps weary of riding in the rain. We have exactly one month left. We fly on November twenty-seventh. Home scratches at our soft edges. Edges raised as braille, silent as rain, as language signed. Tongues held quiet.
I like this book a lot, but it won’t be everyone’s cup of green tea. It's not exactly packed with incident. But if you like travel writing that’s subtle, impressionistic, poetic, and reflective, then Sugar Ride may hit your literary sweet spot.