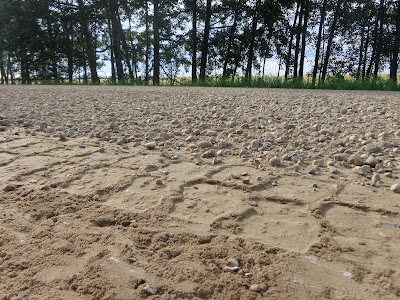 Encountering a grader at work on a rural road is something that occasionally happens to gravel riders, and for me, anyway, it’s usually a mixed blessing. True, graders can transform the nemesis of so many gravel cyclists—unholy washboard—into perfectly flat road surface, but in the process they tend to leave behind this soft, fresh powder, which, although pretty to look at, is no picnic to pedal through. As skiers know, fresh powder can be deceptive. It may look perfect, all soft and fluffy, like grey icing sugar, but it’s a quagmire in the ass to ride on. In a car? No big deal. But on a bike? It kinda bites.


Sure, carving tire tracks across the pristine surface of fresh powder is cool for a while. But on a newly graded road like this I usually end up clinging to a strip along the edge, where the newly spread gravel doesn’t quite extend.

I generally try to avoid this stuff, if I can, but when I run into a grader at work, I do feel a tiny jolt of excitement. Seeing a working grader always provides a bit of a thrill, in the same way that glimpsing a working street sweeper, snowplow, or zamboni does. These are weird, slow-moving, mighty machines that perform important tasks, the results of which we can easily take for granted. But how often do we get to see them doing their weird things? 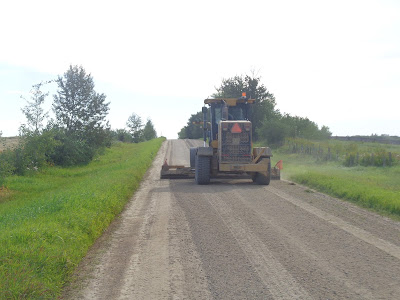 And I can’t resist a drive by. The look on the face of the operator when he or she sees a cyclist pedaling by is often priceless. On this particular ride, east of Leduc, the grader dude appeared to be in some kind of washboard-induced hypnotic state; I passed him on the left and looked up and waved as I went by. He raised an eyebrow and did a double-take as I disappeared into the dust cloud.