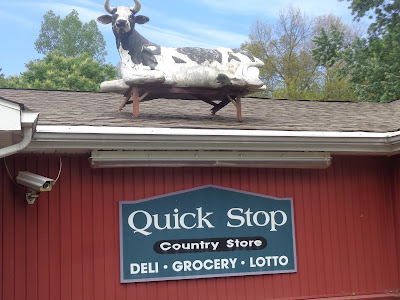 The cow on the roof beckoned. I was ready for a break, for lunch, in fact, when I glimpsed this rooftop bovine and took it as a curious harbinger of good eats. Rural Connecticut, and much of New England, I imagine, is dotted with independent places like this, offering a little bit of everything for locals, travellers, cyclists: cold drinks, “fried dough” (?), night crawlers, fireworks, pastrami sandwiches.

I parked my rental bike out front, not worrying a whit about someone stealing it. (The serene and elevated cow somehow gave off a protective, Jedi-Master air.) Strolling about the surprisingly large store, I surveyed the broad selection of weird American “candy bars” and artery-busting pork rinds, eventually settling on a custom deli sandwich. The Quick Stop felt a bit like an old-timey general store, with its eclectic inventory of food, hardware, and toys. This was my kind of place. 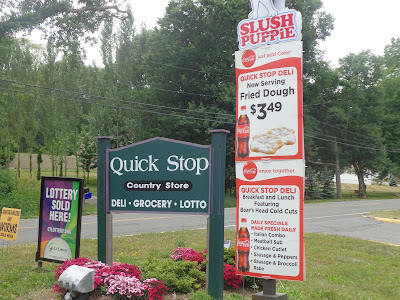 But the wiffle ball display made me stop short. When I was twelve, I played a ton of wiffle ball in my driveway. The distinctive thin yellow plastic bats and white balls (with eight oblong holes on one side only) were inexpensive but could only be purchased in the USA, so my friends and I would stock up on them whenever travelling over the Niagara River with our families.

I remember examining the wiffle-ball box (which used to feature a headshot of a MLB pitcher, say Scott MacGregor or Mike Scott, in my day) and noticing that the Wiffle HQ was in Connecticut, which I promptly looked up in our atlas. Looking at the map of the northeastern US, where I’d never been, I couldn’t believe how tiny some of the states were, especially compared to my home province of Ontario. 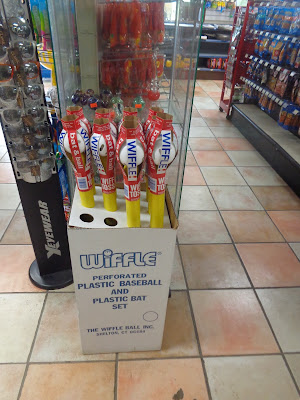 Anyway, I wrote a letter (long-hand, of course) to the Wiffle Company asking for a catalogue of their products so that I could order some through the mail instead of having to wait for another of our infrequent border crossings. About six weeks later, I received a package in the mail, with a return address of Shelton, CT. Only years later did I learn that the wiffle ball was, in fact, a Connecticut creation, invented by David Mullany in Fairfield, CT, in the 1950s. He wanted to make a ball that his 12-year-old son could make curve. I played wiffle with my friends for hundreds of hours.

When I had my own kids, I ordered another shipment (online, of course, this time) and tried to teach them how to throw a rise ball and curve, but my sons never really took to it. A couple of yellow bats got used for light-sabre battles, but most of the balls are still in their boxes in my garage.

All of this came back to me in rush as I stood there in the Quick Stop, staring at the wiffle display, waiting for my sandwich, surrounded by fireworks and beer, under the strange, nostalgic spell of a Connecticut cow.