“A day’s outing is indeed most perfect when its rewards consist of experiences derived on wheel, as well as afloat.” -- W.S. Beekman

A ferry crossing is an essential part of any good bike tour, according to one of my hardy touring partners, Val Garou. He argues that there’s something about shifting from bike to boat to bike that adds an extra dimension to a trip—even if that boat portion only lasts for a few minutes.

Short cable-ferry trips across the Red Deer River have long been a part of getting around in the Badlands of central Alberta. At one time there were a dozen ferries on that river, but now there are just two left: Bleriot and Finnegan. We took our bikes aboard both.

The Bleriot Ferry is something of a tourist attraction these days. (The first operator of the ferry back in 1913 was Andre Bleriot, brother of Louis Bleriot, the first man to fly across the English Channel. Andre moved from Paris to the Badlands at the turn of the century; talk about different worlds. ) It’s located on the Dinosaur Trail, a scenic 40-km paved loop just north of Drumheller and only few minutes’ drive from the famous Royal Tyrell Museum. And it’s free. Every summer thousands of tourists, mostly in cars or on motorcycles, take the 6-minute trip across the 105 metre span of the river.

The day we rolled onto the ferry, however, it was all bicycles. As our group of three was waiting, another larger group of ten cyclists pulled up to join us. They, too, were from Edmonton, but they were doing a light weekend tour of the Drumheller area. We all boarded, leaned our bikes against the rail, and, standing in the middle of the empty car deck, had a quick visit about our respective adventures. The ferryman was unfazed by the bikes-only crossing. It’s probably happened before. The Drumheller area sees a fair number of cyclists; it’s even got a Gran Fondo at the end of June.

A hundred years ago, these little ferries that dotted prairie rivers were more than just physical links. They also came to play a part in fostering social connections. Folks would gather at the ferries for something to do, to check out who’s going where, and to just shoot the bull. 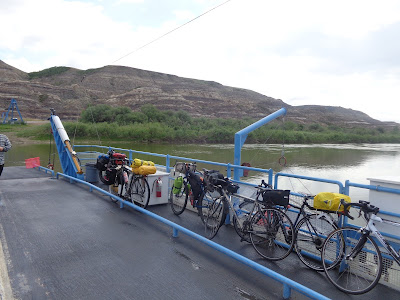 And, in a way, that was still the case for us, except our “community” consisted of cyclists who, aboard the Bleriot ferry that day, convened a genuine, if brief, impromptu social network around bikes. For most of our Rural Alberta Adventure, we were oddities, cyclists in a land without bikes (at least without “pedal bikes,” as more than one local called them), curiosities doing a strange thing. But that 6-minute gab session with other riders, when we cyclists had the ferry all to ourselves, was a brief moment—really the only moment on our ten-day trip--when cycling felt like the norm, not the exception.