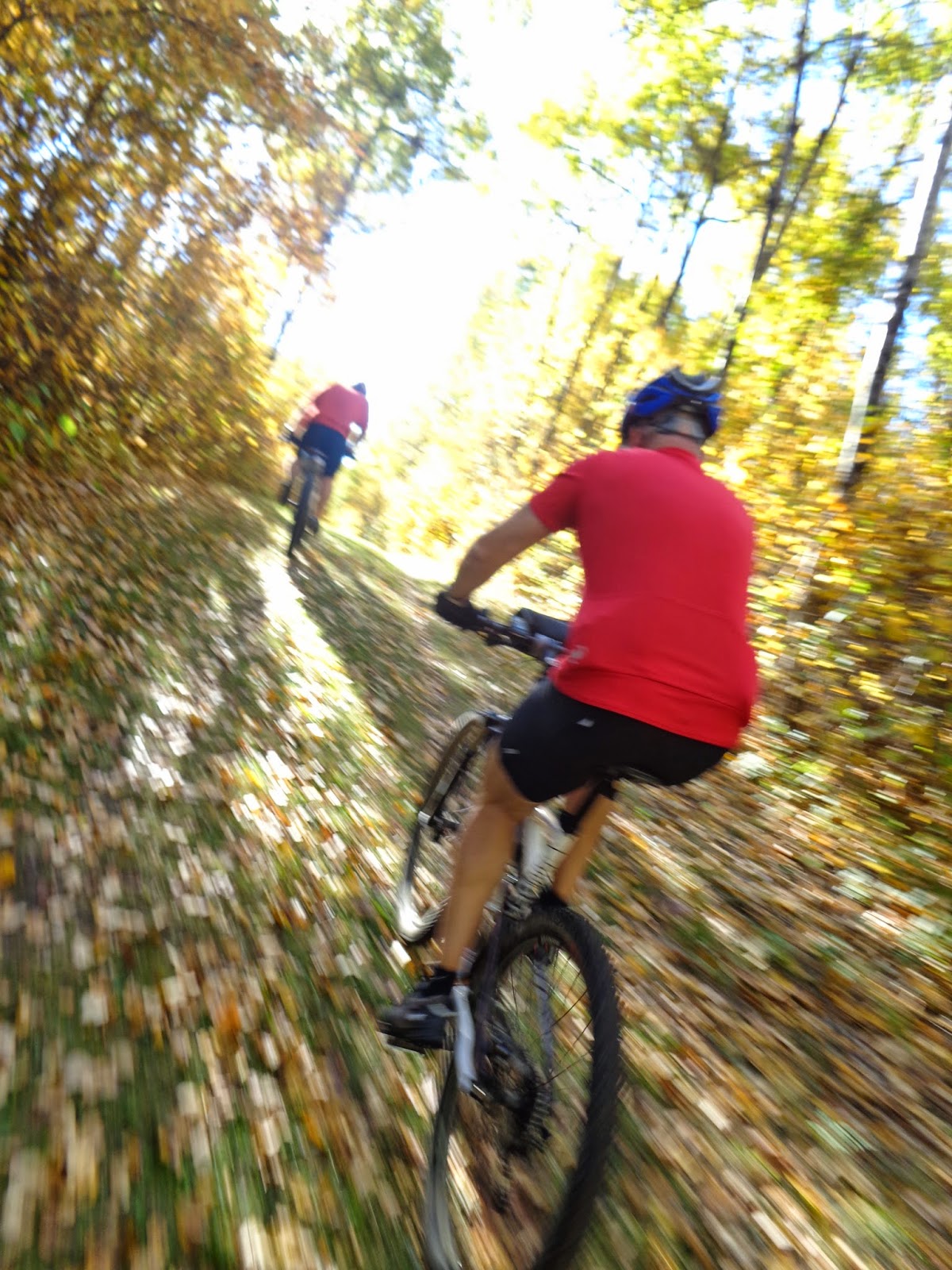 It’s full autumn in Edmonton and for a few short weeks we've been enjoying a narrow riot of color in the trees and shrubberies of the capital area. No gaudy oranges or hectic reds for us.  In the aspen parkland  we get a limited but still rich palette of greens and golds.

The peak of autumn color here was some time last weekend. By Tuesday, the brightness had already begun to leach out with every passing second and many of the leaves had decided to make a break for it. With every commute past Alexandra Circle I see less green, less gold, more sky through the trees. Soon enough all will be brown.
So last weekend when Joe suggested we head out to Cooking Lake-Blackfoot, an hour east of Edmonton, for some off-road riding (mountain and fat), I thought, why not? There’s no better time to pedal through the forest trails than in this brief September window of green and gold. 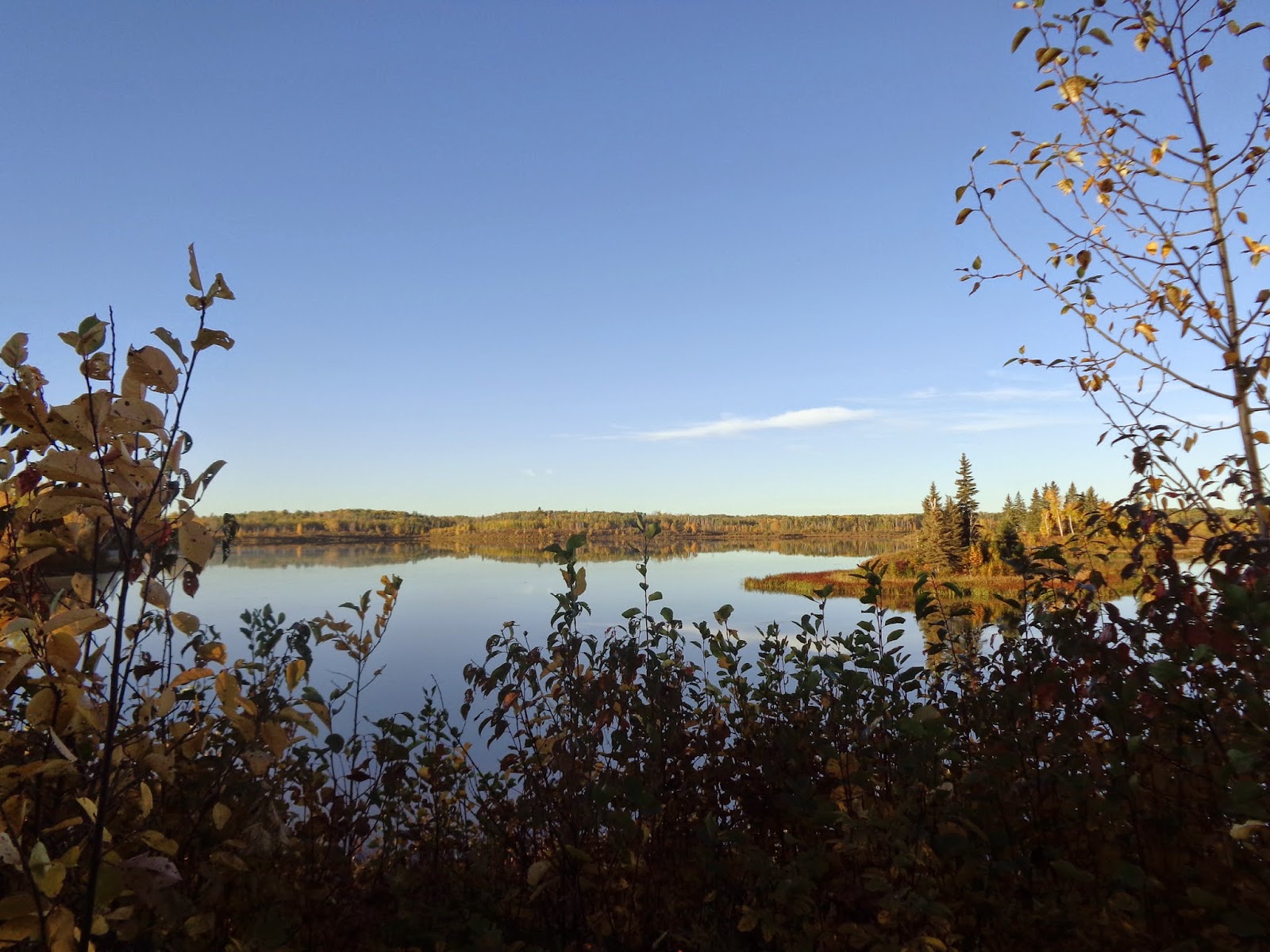 Funny that I’ve lived in Edmonton for 20 years and never gone for a bike ride at Cooking Lake.  I’ve cross-country skied there, sure, many times. The ski trails are terrific—extensive, scenic, well maintained. (This is the home of our Birkebeiner every February.) And I’ve cycled the fine country roads all around the park. But it was only a few months ago that Val mentioned the possibility of taking our fat bikes out to the ski trails. Theoretically, it should work, I said. So Joe’s invitation was timely, a sign maybe. 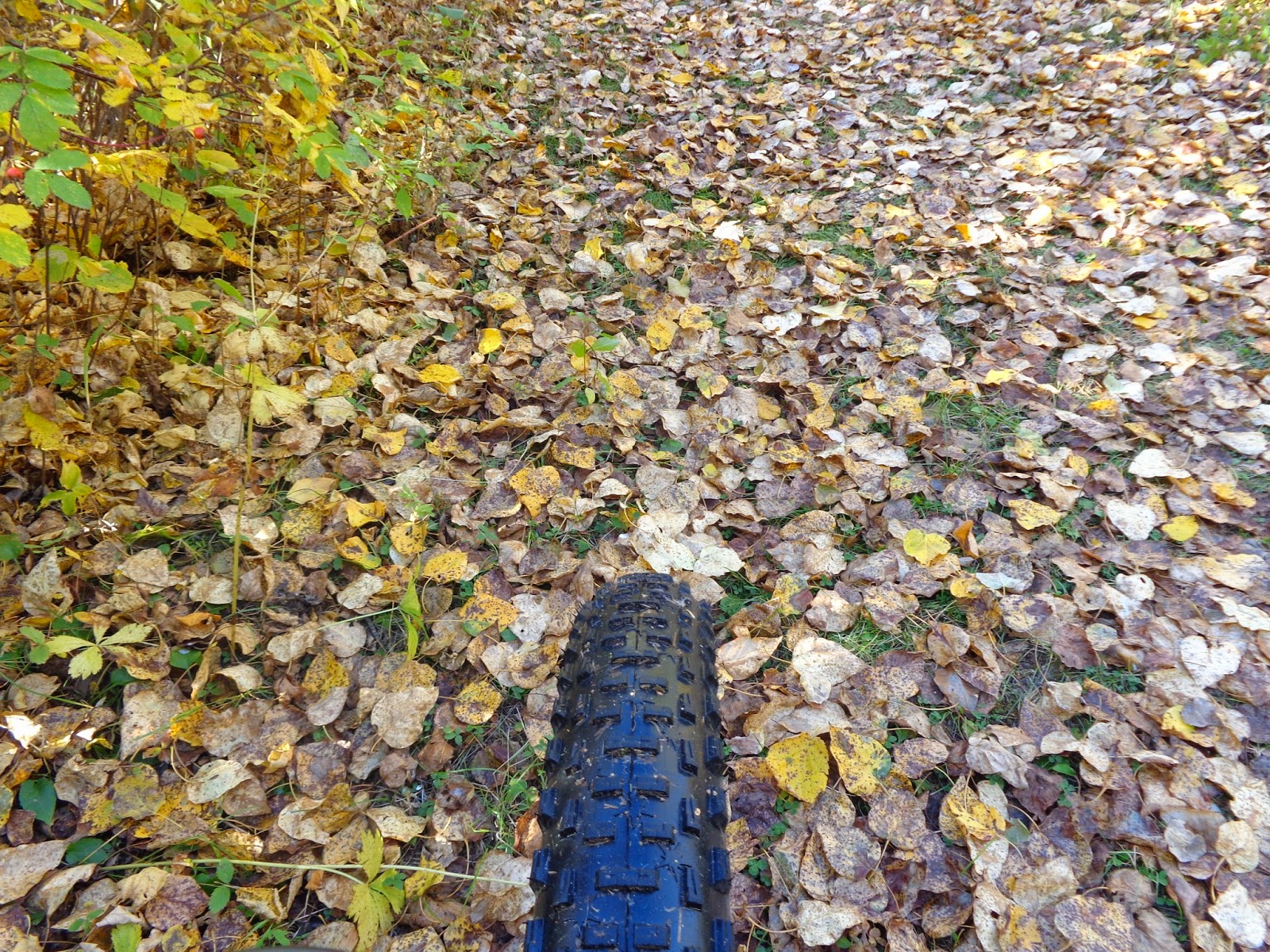 Turns out the features that make CLB so terrific for skiing also make it damn fine for fatbiking. The terrain is what the plaques call “knob and kettle”—small glacially formed hills and depressions, many in the form of tiny ponds—which makes for undulating trails, easy rolling and winding hills, and pretty views of baby lakes and aspen trees at every turn. Nothing technical about the riding here; the trails are wide double-track, almost entirely grass, though at this time of year, a leafy carpet of brown covers some of the trails. The uphills aren’t steep; the downhills are twisty. It’s a hoot to ride.

Because it’s a provincial recreation area, BCL is well taken care of. Pretty much every intersection has trail signs and a map, complete with a you-are-here bolt screwed into it. You can’t really get lost. The only logistical difficulty is wiggling through the tightly angled fence gates, which were designed more to keep motorbikes out than to allow bicycles in. 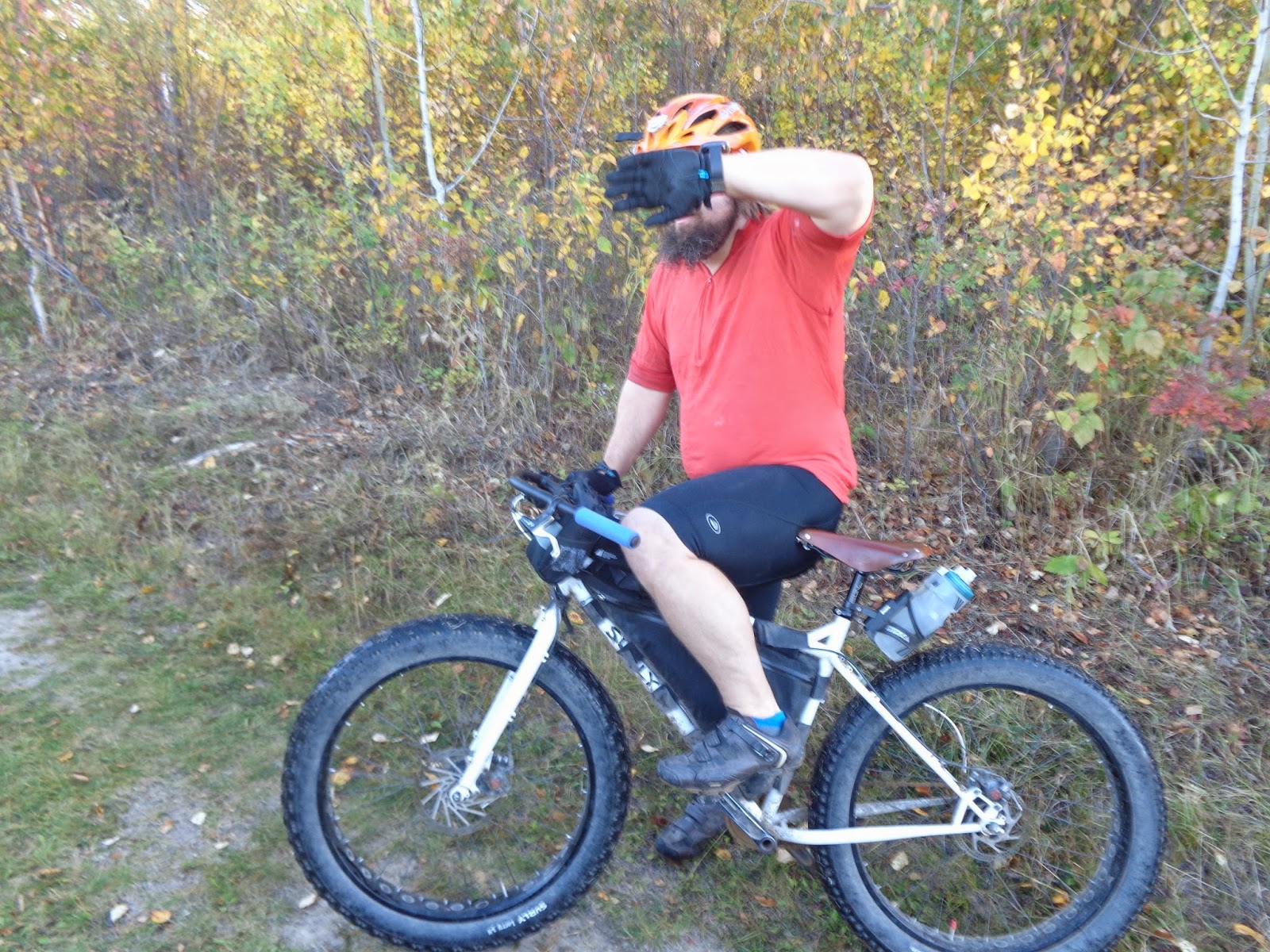 We set out early on Sunday morning, before the hikers and dog walkers were finished breakfast. The only sounds of civilization we met was the blast of shotgun shells in the distance. Pedalling the knobs and kettles, I experienced a semi-déjà vu from having skied the trails years before—though without snow, and camouflaged in green and gold, the trails were only recognizable in glimpses.

The dew on the grass made for interesting cornering. Taking a downhill lefthander, Jeff executed a pro slide into third base, bike between his legs. Shortly after, my fattie flushed a grouse out of the bushes. (It’s a stupid bird, to be sure, but smart enough to stay away from shotgun territory and take its chances with middle-aged cyclists.) Some of our gang were on mountain bikes, which work just fine here too, but the fat bike felt right at home. Like the grouse, it can’t really fly, but it can put on a good show. 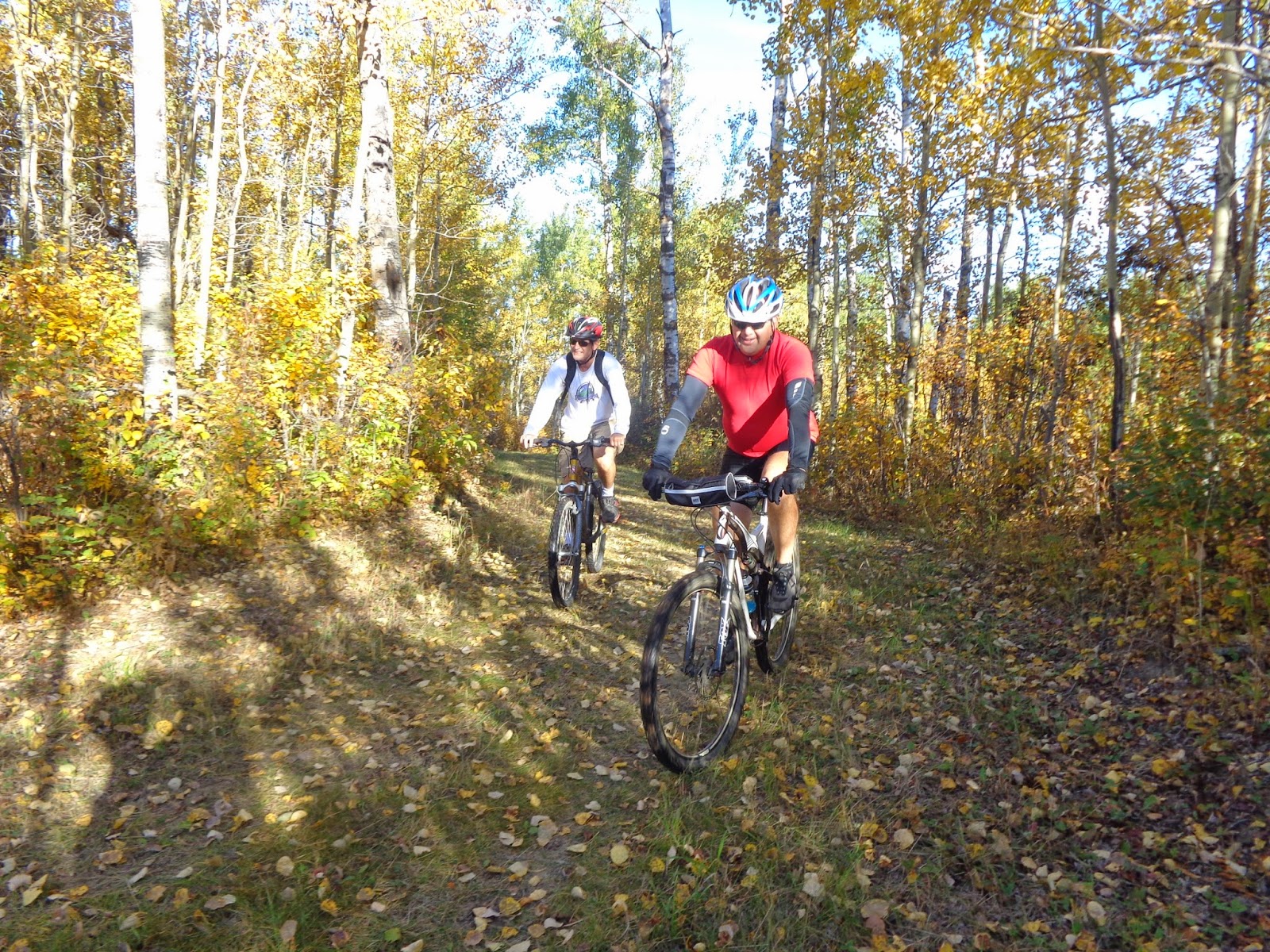 Cycling at this this time of year is, for me, always slightly sad. Even if it’s sunny and warm, as it’s been here lately, there’s a low-level sense of seasonal inevitability, of time running out on the fair weather riding season. I find it hard to ride wholly in the present, hard not to wonder if this is the Last Nice Day, hard not feel the old urgency to cram as much as we can into what little is left of the season.

I still felt that at CLB, but just barely. The greens and golds hadn’t yet lost their glow. For a day, anyway, I could just ride.
Posted by Jasper Gates at 7:11 PM