The Tour Is Won on the Alpe 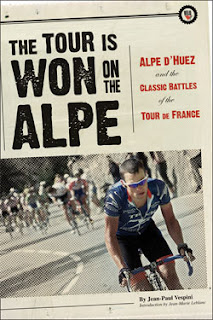 Like many fans of the Tour de France, I long ago circled July 18 on the calendar as a stage in this year’s race not to be missed. That’s Alpe d’Huez day, when for the first time in Tour history, riders will climb the legendary mountain twice in the same stage, with the stage finish at the summit of the second ascent. (The Alpe was featured twice in in the 1979 route, but on two different days.) This intriguing race route  factoid prompted me to pick up The Tour Is Won on the Alpe (2008) by French journalist Jean-Paul Vespini. (The book was translated by American cycling historian David Herlihy.)

As Tour de France fans know, the Alpe d’Huez is one of a handful of mountain climbs—along with Mont Ventoux and the Col de Tourmalet—that has an iconic status in the Tour de France. The punishing 21-switchback ascent first appeared on the Tour route in 1952; then not again until 1976; since then it has been included almost every year. Because it is such a difficult ascent, the Alpe has been the site of some great Tour de France drama over the years. Many champions, from Fausto Coppi to Bernard Hinault to Miguel Indurain to Lance Armstrong, have taken command of the race on the slopes of the Alpe. As Vespini puts it, “It is a climb that delivers a verdict—absolute, impartial, and final.”

For this reason, fans flock to the Alpe most Julys, packing the road along the steep, numbered switchbacks, leaving only the narrowest passageway for the cyclists. If you’ve ever watched one of the Alpe stages, you’ll understand what makes this climb the stuff of legend. Andy Hampsten, winner of the 1992 stage, captured the magic: “’People didn’t clear a path until the last second. I felt like I was going 60 kilometers an hour. The sensation of passing through a narrow opening in the crowd was the most beautiful and emotional thing I’ve ever experienced in my cycling life.’”

Vespini takes us through the heroic performances, notorious scandals, and “classic battles” associated with the Alpe over the years, beginning with Fausto Coppi’s decisive victory in 1952 (he won the stage and seized the yellow jersey for good) and ending with Frank Schleck’s stage win in 2006. (Since then, the Alpe has been included in the 2008 and 2011 editions as well.) For instance, there’s Marco Pantani’s stunning ascent in 1997 (still the fastest ascent on record); Lance Armstrong’s decisive time-trial victory there in 2004; Michael Pollentier’s disgrace in 1978 (getting caught trying to cheat a drug test); and, perhaps most famously, uneasy teammates Bernard Hinault and Greg Lemond crossing the finish line together in 1986. 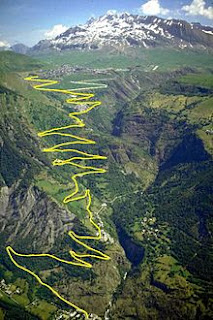 Unfortunately, despite all the terrific stories associated with the Alpe and the way it has, indeed, figured prominently in GC battles many times, there’s something disappointing about Vespini’s approach. Most of the book consists of straight race reportage, blow-by-blow accounts of each stage on the Alpe. This is interesting as far as it goes, especially if the reader, like me, isn’t already familiar with some of the more obscure winners of Alpe stages over the years. (Hennie Kuiper and Peter Winnen? Both two-time stage winners in the 1970s and 80s. Go figure.) But ultimately the book feels superficial and narrow—too much reporting, not enough analysis and reflection and consideration of the bigger picture. There’s so much more that Vespini could have done with this project.

At the outset, Vespini briefly tries to make a case for the Alpe d’Huez as something more than a mountain—as an icon, a pilgrimage site, a magical place invested with tradition. He calls it “cycling’s modern temple.” But while there may be some truth to that claim, Vespini doesn’t offer a very compelling argument. What he needed to do was make the Alpe itself come alive as a kind of character. I kept hoping Vespini would provide more context about the mountain, its history, its geography, its culture. Who lives around this mountain? What’s the local mythology of it? Why didn’t he talk to the people who live there? Why doesn’t he talk about his personal connection to the mountain? There’s very little research at all in this book, traditional or personal, and that’s a shame.

Someone could and should write a kind of biography of the Alpe or, perhaps even better, of Ventoux from a cyclist’s perspective. The closest I’ve seen to what I’m imagining is the excellent chapter on Ventoux in William Fotheringham’s much-admired Put Me Back on My Bike, his biography of Tom Simpson, the bike racer who died near the summit of that mountain during the 1967 tour.

In fact, if you’re looking for a cycling book about a famous Tour de France mountain, one that offers something deeper than race-reportage, Fotheringham’s bio of Simpson is probably a better bet.