Let me tell you about my favorite public toilet.

Tucked away in a western cranny of Edmonton’s river valley, between Fort Edmonton Park and the John Janzen Nature Centre, stands a marvel of elegant, simple, sanitary-engineering  design. It’s a composting toilet (CT), made by Advanced Composting Systems of Whitefish, Montana, and it’s situated in a small raised structure next to a cycling path. The staff of the Nature Centre look after it, and they keep it remarkably clean and well stocked; I’ve used it many times and never been caught wanting for supplies. Sometimes there’s even actual Purell in the hand-cleaner dispenser. 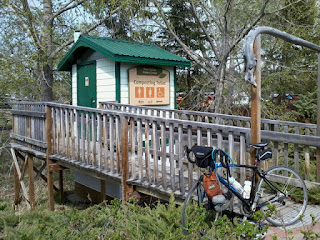 My guess is that the Nature Centre folks see the CT as a kind of environmental PR project, promoting the possibilities of composting. (There is, in fact, a Compost Education Centre at the Nature Centre across the trail). So I suspect there’s a kind of pride factor that helps explain the pristine condition of this craphouse. A sign inside explains how the toilet works—making vague reference to mysterious “organisms” that live down below and go to town on the unsavoury deposits in such a way that renders said deposits benign, odorless, heck, even beneficial. The sign refers to the end-product as “a rich, well-stablilized mulch.” And here’s the amazing thing: the place is completely odorless. A quick glance down the hole would make you think that’s impossible, but I’m here to testify that the place absolutely does not smell in any way toilet-y. Actually, it smells kind of peaty, in a subtle, earthy way, like a fine single malt Scotch. 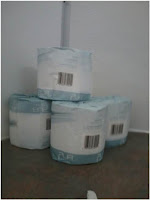 I love this toilet. I know that sounds silly. But I do. It makes me happy for reasons that are hard to explain. It so happens that this CT is located along one of my favorite cycling routes, so I often stop there to use the facilities. When it first opened a few years ago, I thought the lack of odor was due to the structure being so new. Surely, once word got around and patrons began to contribute to the facility, the place would begin to smell and feel like any other public toilet. Didn’t happen.  True, I’ve never seen anyone else there, so it kind of feels like my little secret toilet turret. But again, the hole doesn’t lie. Others clearly are using it—and still, no stink. The whole thing feels kind of magical.

Many cyclists have their favorite pit stops along their well worn routes. It might be a local java bar or milkshake shack, a perfectly situated picnic table, or a finery-filled country store. Stopping at these places, if only for a few minutes, almost always provides a small boost, as much both psychological as physical. I tend to see these spots as checkpoints to look forward to, if only in a small way, no matter the headwind or how weary my legs may feel. As a tribute to these places, I will, over the next few months, offer a series of occasional vignettes profiling some of my faves. 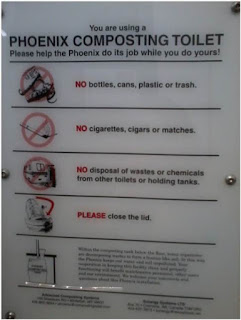 But back to the CT. One day last summer, I pulled off at the CT even though I didn’t technically have to use it. It was an unusually hot day, and I knew that inside that toilet building it would be shady, cool, and earthy-smelling respite. I felt a small thrill when I approached the door. Once inside, I sat down for a few minutes and re-read the various laminated signs, enumerated the rolls of toilet paper, squirted some Purell on my hands, and then headed back out into the sunshine, threw a leg over my bike, and pedalled off, with a grin on my face.
Posted by Jasper Gates at 1:03 PM