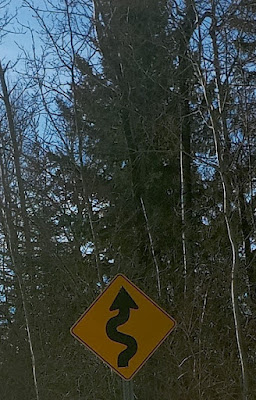 “Nice road,” said Val, with approval, as we–Val, Penn, and I, the Dusty triumvirate–headed up Range Road 20, just north of Township Road 512, southwest of Edmonton. It was an unusually warm winter day, and the roads were nicely packed snow-over-ice. Perfect winter gravel-riding conditions.

I nodded. It was a nice road, at least at that particular spot, and I half-remembered picking it for a reason when I put together this route the night before on RWGPS.

A few seconds later, Val and I laughed as we both realized precisely what made this bit of road so “nice.” It wasn’t straight. That was it! A little slough on some farmer’s property encroached on the perfect grid of roads pushing out a modest bump in the route. The non-straight portion of the road couldn’t have lasted more than a few hundred metres. But that tiny variation, that ever-so-slight bulge in the roadway, qualified as an exotic topographical feature. That’s prairie gravel for you. I have lived here too long.

(I even composed an ironic breathless Alberta Gravel Cycling facebook post I would pen about my discovery: “Man, I found the most amazing gravel road! At first it feels like a regular road but then it, suddenly, like, curves to the left! But that’s not all. Then it swoops back to the right! Awesome!”)

I imagine there are cyclists somewhere–residents of the Alps, maybe?--for whom a ram-rod straight road that runs in a bead to the horizon is an exotic marvel, something to get really fired up about.

Do Matterhornists dream of grid roads and straight shots the way that I do about switchbacks and squiggles?