The Buddha of Westlock 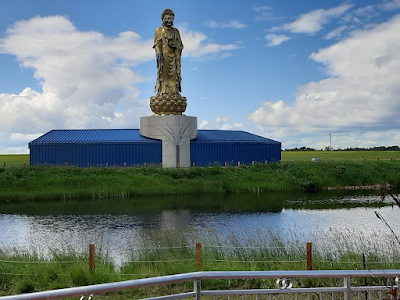 You can see it from several kilometres away, the giant golden Buddha, towering above the fields of green south of Westlock, Alberta. If you didn’t know to expect it, I can see how you might be startled  at the sight. It doesn’t seem an obvious location for a 50-foot Buddha.

So what's the story? The big Buddha  resides on the grounds of the Tay Thien Monastery aka Westlock Meditation Centre, built in 2009 by the Edmonton Institute for Buddhist Studies. The grounds include a residence-type building, a retreat centre, small pond, Lotus Temple, and statue garden. 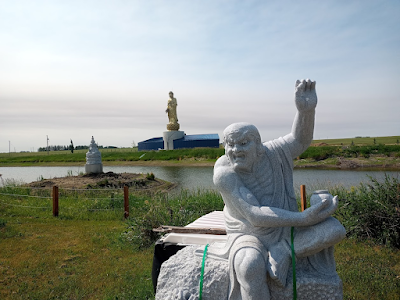 Apparently giant Buddhas are kind of a thing, especially in southeast Asia. You can see Top Ten Lists of them on the internet. Compared to some of the big boys in Myanmar and Vietnam, the Westlock Buddha is small potatoes, but for an Alberta Buddha, it’s pretty impressive.

Visitors are welcome to walk around the grounds. At least that’s what we did, and when we encountered a friendly groundskeeper guy, he stopped to chat, explaining some of the plans for the completion of the project. The statues are new, just in the process of being unpacked, and they will eventually form a kind statue garden and pathway, he said. It may take some years before the whole thing is complete, he told us. There’s no rush, it seems. 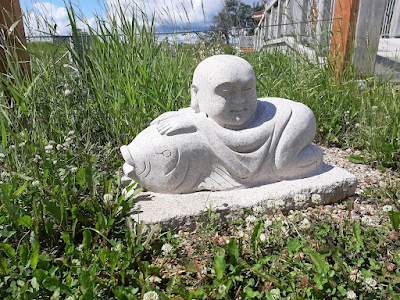 The road to enlightenment is made of gravel. I don’t mean that as some kind of figurative zen koan. Literally, all the access roads to the Buddha of Westlock are gravel roads. Thus the Buddha makes a perfect destination for a gravel day trip north of Edmonton. Park somewhere like Alcomdale, Legal, or Westlock and ride to the Buddha and back.

I can’t promise transcendence, exactly, but the journey might just offer a little bit of dusty nirvana in rural Alberta.