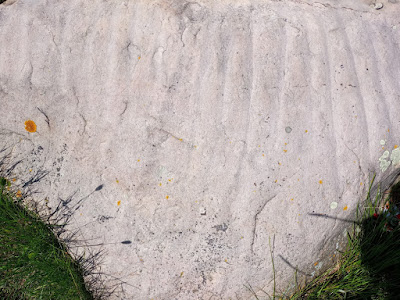 I’m a big believer in having a destination on a gravel ride. It doesn’t have to be anything special--a country store, an onion-domed Orthodox church, a shaded picnic spot, a viewpoint. A plaque even. I’ll gladly ride to a random plaque and back.

On a recent foray, setting out from Kinsella, in east central Alberta, we settled on the Viking Ribstones, an historical site I’d read about online. Ribstones are big old rocks with shapes or lines (specifically lines that look kind of like an animal’s rib cage) carved into them a long time ago by Indigenous people. It’s thought that the carvings were a kind of offering to the spirit of Old Man Buffalo. Apparently nine different ribstone sites have been found in Alberta, but the one near Viking is one of the better preserved specimens. 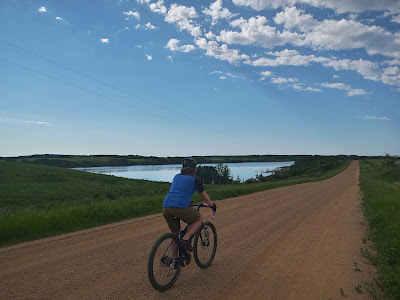 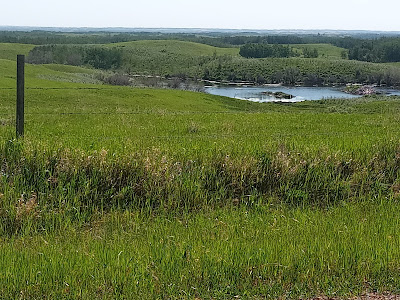 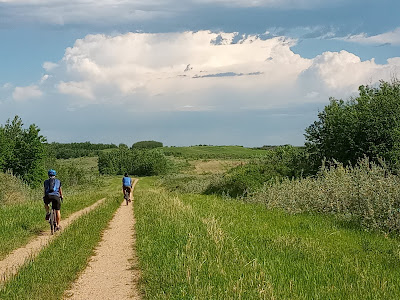 We took the scenic route, exploring some of the quiet, rolling backroads of Beaver County. It’s pretty country thereabouts, a birder’s delight too. We kept seeing Ducks Unlimited signs inviting visitors into wetland areas--a far cry from the No Trespassing signs that are as common as magpies in Alberta. Not surprisingly, this area’s got beavers galore, with every little pond sporting a dam or two, it seems. At our campground at Camp Lake Park, the beavers provided the evening’s entertainment, patrolling the shore and smacking their tails for kicks. The lady who runs the campground was exasperated by all this beaver action, but we found it all pretty entertaining.

You can spot the Viking Ribstones site from miles away; it’s at the top of a hill, and once you reach it, you can see why this spot was chosen. It offers the best prospect in the area, views of twenty or thirty miles on a clear day. I don’t know why exactly, but the actual physical space--apart from the stones--just feels important in the way that highpoints sometimes do.

If you weren’t looking for it, you could easily miss the site; the turnoff to the little parking area didn’t even have a sign. A plaque by the parking area explains the story of the stones. The ribstones themselves sit in a small cordoned off area on the edge of a farmer’s field. An unobtrusive, low, white metal railing, built in the 1950s, is all that marks the actual spot. The ribstones are surrounded by other smaller non-ribstones and the whole area is overgrown with grass, so that from a distance it looks like a small stone mound, a kind of burial site. It’s as if the stones are slowly being taken back by the land. 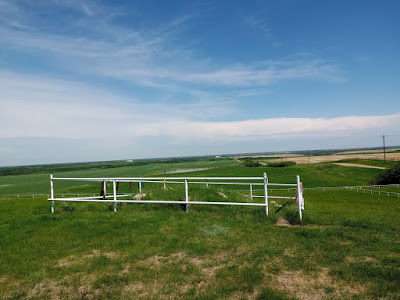 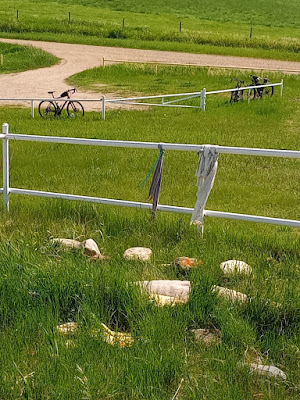 There are two main stones, one with only ribstones and another with ribstones and some curious pock marks that have been carved into the stone. According to the plaque, the pocks are probably a reference to the Iron Creek meteorite, which landed about 40 km from the site and was sacred to the Cree people in these parts. Side by side photos of the two make a compelling impression: the marks on the ribstone look remarkably similar to those on the meteorite. (The story of this meteorite’s travels is a wild one, and I’m not just talking about its galactic gallivanting; let’s just say that since landing on Earth, it’s gotten around.) This extra-terrestrial element of the story makes these particular stones unique.

The immediate area around the stones has the somewhat messy feel of a make-shift shrine. People have left all manner of offerings on or near the stones, from traditional tobacco to trinkets to pieces of fabric tied like scarves around the metal fence rail. Some of the offerings were random and strange: a large bolt, a loonie and a twoonie.

Personally, I like the rustic, non-manicured, barely curated site. There are no tourist crowds and little feel of institutionalized “history.” Yet the place has an undeniable presence--some kind of mysterious gravitas.

The ribstones are a worthy destination for any traveller in this part of Alberta but they are especially well suited to one on a bicycle, for I can’t think of a better way to approach and depart this quiet, peaceful place.