Short Sleeves (and Other Dreams for 2021) 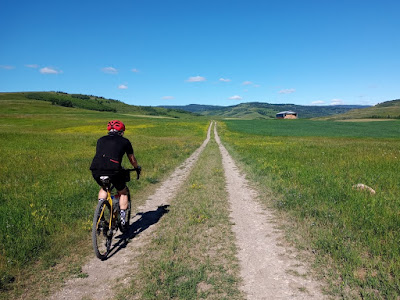 Late January is usually the time of year when I start scheming cycling plans for once the snow’s gone. As the days get incrementally longer, I find I can allow myself to begin dreaming of green fields and short sleeves--even if they’re still many months away.

This year, of course, any planning must take into account the COVID restrictions that are likely to be with us into the summer if not longer. In fact, with the prospect of variants in our midst, there’s every chance that the coming months will see lockdowns and movement restrictions unlike anything we’ve seen so far, at least here in Alberta.

But I can still scheme, even if I have to accept that I may end up doing most of these rides by myself, if at all. Strange as it sounds, I get a lot of pleasure simply from the plan-making itself--regardless of whether any of them come to fruition. So here’s my list of wanna-do’s for 2021:

Strawberry Creek: In 2019, Tim Bulger organized a casual early season gravel get-together out by Telfordville, southwest of Edmonton, that he called Strawberry Jam. The roads out that way, south of the North Sask River, criss-crossing Strawberry Creek are indeed sweet, quiet prairie gravel, with a few tart bits. Throw in a stop at the Calmar Bakery and you've got a perfect little day trip.

Half Moon Lake: This Natural Area up by Thorhild has a lovely sandy trail through pine forests that I’ve hiked a few times, and I have a theory that it is fat-bikeable. It would be a bit of a slog through the duney parts, but it might just be worth the effort.

Mount Edith Cavell: Before the winter gate opens, a visit to Jasper, even if just for the day, is a must. Strava Jeff and I have got a date with Dame Edith.

Victoria Trail: For the first time in 6 years, I didn’t get out to the Victoria Trail last year. I’m hopeful that The Dusty 100 can return in some form in 2021, perhaps as a staggered-start event, with groups of 4 rolling out at 30-minute intervals or even an individual time-trial. Heck, I’ll ride the route by myself, with only my bugle for company, if that’s what it takes.

L-B-L: This Gravel Experience route in the Pincher Creek area, consisting of gravel roads between Lundbreck and Beaver Mines, looks to be right up my alley: foothills, mountain vistas, Mormons, a general store, and a brewery.

Edges of Waterton: I’d do this on the same trip as the L-B-L. Another Gravel Experience route, this 77-km day ride looks like a southwest stunner. It’s a long drive from Edmonton, sure, but what the hell else am I going to do with my time?

Pembina River Provincial Park: I’ve long thought this campground on the river would be a great destination for an overnighter from Edmonton. The gravel roads out Alberta Beach way are swell; the only trick with this trip is figuring out how to bring an inflatable raft along on my bike.

Snake Indian Falls: I first heard about this route in Jasper from Greg Nicholson on the Gravel Alberta Facebook page. It sounds brutal--climbing, debris, hike-a-biking--in the best possible way.

Ranfurly Ramble: Every July, I drive to Manitoba via the Yellowhead, and every time I pass the village of Ranfurly, about 130-km east of Edmonton, I’m stunned by the breathtaking green hills and rolling gravel roads on both sides of the highway. Time to stop and explore them.

Neutral Hills: It’s hard to find much info about this curiously named, oddly hilly area near Coronation, about 300 km southeast of Edmonton, but the few photos I’ve seen online make me think it’s worth checking out.

Finnegan’s Wake: Last August, Aaron Falkenberg put together a badlands route that included a Finnegan Ferry crossing of the Red Deer River. I couldn’t make it last year, but if it’s on again (fingers crossed we can ride with other humans safely by August), how could I resist a gravel ride with a literary allusion in the title?

How many of these will I actually end up doing in 2021? Probably only a handful, but who cares? I’m loving the dreaming for now. As that old sage Frank Bascombe says, “Anticipation accounts for 80% of life’s happiness.” And in COVID times, it’s even higher than that.