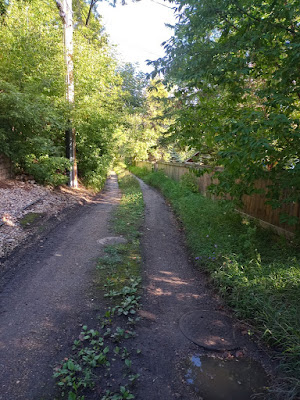 Is it possible to have a genuine gravel experience while riding in the city? This may seem a ridiculous question, but it’s one I set out to answer anyway this summer as a COVID-induced something-to-do project. Before you scoff at my premise, let me establish my terms.

By “genuine gravel experience” I mean that of 1) riding on roads that are primarily not pavement 2) where vehicle and pedestrian traffic is sporadic, if not scarce 3) where one experiences the peace and quiet of nature, away from heavy vehicle traffic 4) and where one occasionally feels the sense of adventure that comes with venturing into territory where bicycles rarely venture.

To be clear, I’m not talking about riding on gravel multi-use paths in the river valley or elsewhere. While many of those gravel paths do offer an experience in nature and, in some cases, a kind of adventure, they’re not roads and they tend to feature a steady stream of pedestrians (something you generally see only occasionally while gravel riding). So for the purposes of my experiment, they don’t count. No paths, no trails allowed.

So where are these urban gravel roads I’m thinking of, you ask? In my part of town, I pass them every day but they’re easy to miss unless you really pay attention. I’m talking about alleys. Several neighbourhoods close to where I live in west Edmonton still have at least some unpaved alleyways, narrow gravel-surface back laneways that are, technically, by city standards, roads. For some reason, Laurier Heights, Parkview, Crestwood, Grandview Heights, and Landsdowne all have some gravel alleyways. So that’s where I’ve been exploring on my gravel bike. 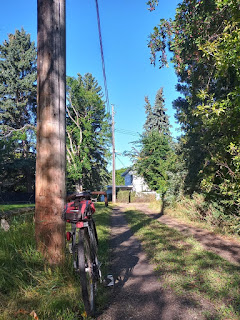 This alley in Laurier is where I got the idea. It runs behind Laurier Drive, from about the pedestrian bridge over the Whitemud down to the zoo, although it’s not continuous; in spots there are paved bits. At this particular spot, though, there’s a perpendicular gravel alley which creates a gravel alley intersection (!) next to a kind of secret parklet, a wildish-looking little green space that I had no idea existed. Apart from the residents of the streets on either side, I doubt anyone even knows there’s gravel there. 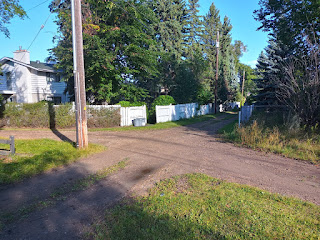 On the other side of the river, over in Landsdowne, a similar winding gravel alley can be found behind much of the perimeter road that backs onto ravine and university farm. In fact, one day while I was tooling around that alley, I hit the gravel-ride jackpot: a real, live grader in action. Is there any more seminal gravel-riding experience than that? 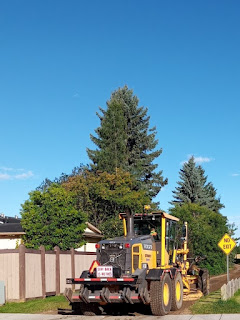 In my travels in laneways I encountered about the same number of cars, bikes (as in, none), and pedestrians (a few more) as I would in the country. And the motorists were generally just as surprised and puzzled to see me as they are in rural areas, though maybe a little less friendly. At first, I wondered if it might be dangerous, with vehicles backing out of garages, etc. but that wasn’t an issue at all for me. I had no close calls with vehicles, all of whom were travelling so slowly that there was lots of time to react.

Gravel alleys, like gravel roads, come in all sorts. Some are nicely kept, well maintained, fast rolling; others are scraggly, washboardy, or lined with shaggy trees encroaching on the right of way. 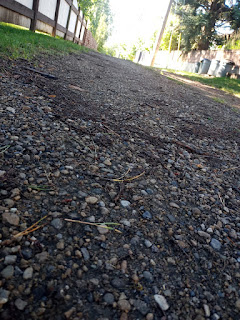 Of course, you notice things while riding in alleys--fences, in a wide variety of styles and stages of decay; garbage storage systems, some clever and discreet, others crude and crass; and fruit that are fair game (I ate a lot of alley raspberries in July and a few apples in August). You realize that while some people take great pride in their back alley presentation, not surprisingly, many don’t--and this is true of some residences with gorgeous, meticulously cared for front yards. They broke the bank on the front and not put much effort into the back. There’s a reason you’ve heard of Curb Appeal and not Alley Allure.

The great irony of many of the alleys in Laurier Heights and the Valleyview part of Parkview is that they’re in some of the fanciest, most expensive neighborhoods in the city. We’re talking super-pricey mansions along the edge of the river valley, multi-million dollar homes, in some cases, and yet their back alleys consist of crappy gravel and dirt. Here, for instance, is a photo of the alley behind Connor McDavid’s newly constructed chic villa overlooking the river valley: 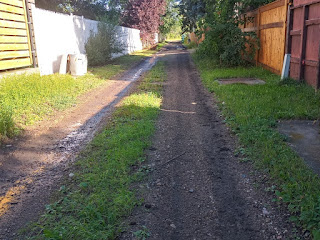 Of course, riding alleys comes with some obvious downsides. The gravel sections are short, choppy, interrupted by bits or sections of pavement and crossing actual roads. Also, while alleys are quiet urban spaces, you're almost always aware that domesticity is just on the other side of the fence. Plus you end up riding really slowly, meandering, really, though this isn't necessarily a bad thing. You get to see a different side of the city, not wild exactly, but just not usually seen, and certainly not generally sought out on purpose, except by bottle pickers and other scavengers.

With the right attitude, you can, indeed, I believe, experience in gravel alleys of a city at least some the pleasures of genuine gravel--new territory, peace and quiet, a fresh perspective, and the occasional raspberry.