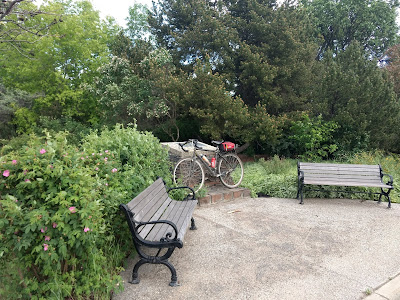 In the heart of what we in Crestwood call “The Church District,” a two-block residential area with five churches (Catholic, United, Apostolic, Seventh-Day Adventist, Christian Reformed), sits a tiny parklet that I call Lady Embalmer Park.

It’s on 148 Street, just south of 99 Avenue, tucked into a large green space. There’s a cairn and two benches. A plaque on a cairn explains that Isabelle Connelly (1879-1963) was a pioneer teacher, community worker, and the first licenced lady embalmer in Alberta. LEP is directly across the street from St. John’s Catholic, which is not surprising, given that, as the plaque informs us, Connelly was awarded an honour by none other than Pope Pius XII (apparently a big fan of embalming, in general, and lady embalmers, in particular).


The benches beside the cairn are hardly ever used, perhaps because there’s something a little off-putting about lounging beside a monument devoted to the memory of a woman who tampered extensively with dead bodies. 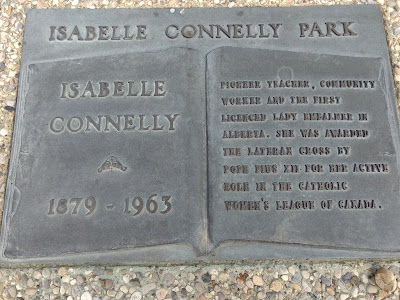 Isabelle Connelly, of course, lived at a time when embalming was boss, when people thought it was a perfectly reasonable idea to drain dead bodies of their fluids, remove internal organs, pump the hollowed out corpses full of chemicals, and then dress them up in ill-fitting suits and bad make up.All of the dead bodies I saw in my youth had gone through this morbid procedure.

These days, embalming appears to be going out of fashion. It is, after all, a completely unnecessary procedure that involves some highly intrusive corpse-tampering and dubious toxic chemicals. I mean, it’s a double pollution, first of the dead body and then of the earth the dead body gets buried in.

In December, the area sees lots of action during the three weeks of Candy Cane Lane activities, but I’ve never seen anyone stopping to read the plaque. At that time of year, it’s tough for a cairn and benches to compete with the spectacle of the outdoor, life-size nativity across the street at the Catholic church. Camels and shepherds and the baby Jesus on Christmas Day--how could a dead-lady cairn compete with that?

Lady Embalmer Park, though, is a pleasant, quiet spot to contemplate one’s mortality, especially in the fall, I find, when you’re surrounded by mostly bare, leaf-pocked trees. The cairn, though, kind of creeps me out. What’s in it? Absurd as it sounds, it’s hard for me not to imagine an embalmed body stuffed in there, perhaps even the perfectly preserved remains of Isabelle Connelly herself. (I know this sounds crazy but I doubt I’m the first to consider this ghoulish, if unlikely, possibility.)

Still, I like that it’s there, and I do occasionally stop and lean my bike against it, then sit for a spell on one of the benches, surrounded by so many churches on one side and so many trees and shrubs on the other, and contemplate, for a few minutes, what will happen to my own body when winter comes for me. 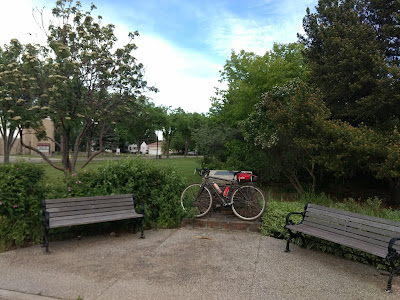