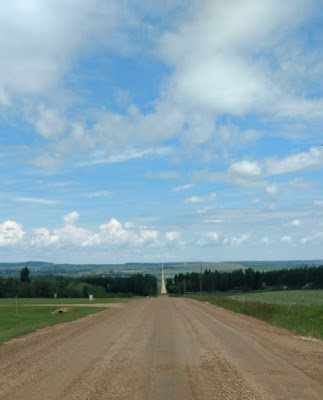 Why is it a good idea to drive 1.5 hours to some random part of Alberta and ride a half-day gravel loop? Think of it as a low-stakes micro-adventure. The landscape may not be that different from home but it’s new territory nonetheless and it just might offer a refreshing break from the same old same old.


Last Sunday, Val and Penn and I ventured out for one of these quick gravel escapes. We drove down to Gull Lake, near Lacombe, to explore an area that has long intrigued me. Every time I’d pass the undulating hills near the Lacombe turn off while hurtling along Highway 2 in my car, I’d think: this terrain looks worth investigating. I bet there’s some sweet gravel here worth checking out.

So we did. Here was the plan: Park at Aspen Beach Provincial Park on the south shore of Gull, dip our toes in the water, and set off on a lake-to-lake circuit, stopping for lunch (and toe-dip) at the tourist village at Sylvan and then taking a different route back. It would be a loop of 70-ish kilometres, mostly gravel. All new to us. 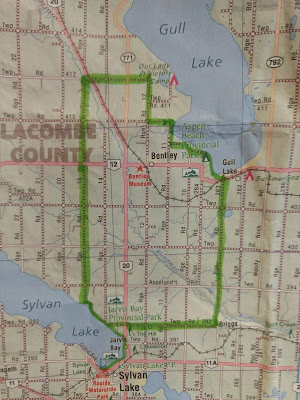 The skies looked unpromising as we saluted the throng of actual gulls lining the shore of the lake and headed off on a straight shot south on RR 283. We got lucky with this road, which offers splendid views of the Medicine Lodge Hills to the west and eventually descends to cross the surprisingly deep Red Deer River valley, a highlight of this area. Everything but the gravel was vibratingly, impossibly green. I was reminded of how June is the absolute best time to explore Alberta by bike: ideal weather, few tourists, peak green. 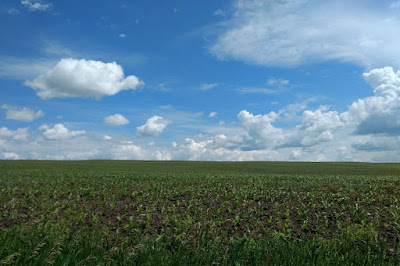 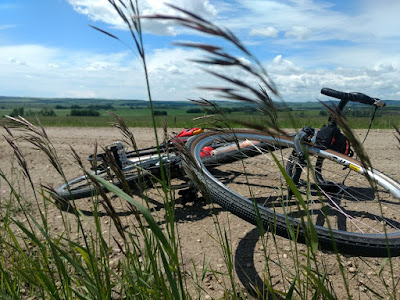 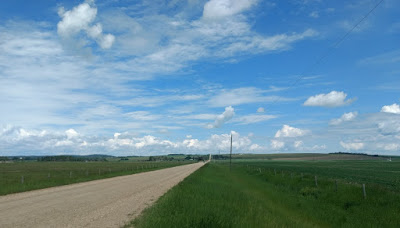 Coming back up from the river valley, we wiggled our way south-west, stumbling upon a couple of “machinery roads,” whose signs warn of rough terrain. These are practically a come-hither invitation for gravel riders. As advertised, these roads were muddy and rutted, gloriously so, if you ask me. Alas, we encountered no actual “machines” on them.

Approaching Sylvan, we managed to avoid the highway by hugging the lakeshore and following a sequence of cottage roads and trails right into the heart of the village. It had been a good 25 years since I’d been to Sylvan, one of the most beautiful and certainly  most developed cottage-country lakes in Alberta. The explosion of development there is both remarkable and horrifying: beautiful waterfront park and trail systems but also gaudy monster homes squeezing out rustic cabins. You can smell the Calgary oil money. Sylvan’s a place where prosperity has triumphed over charm. 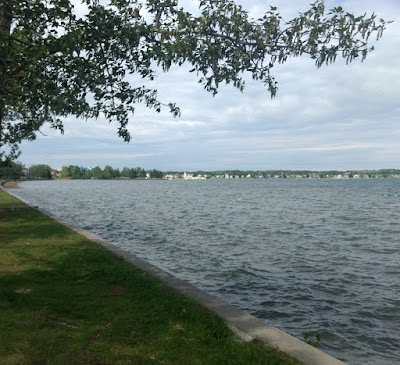 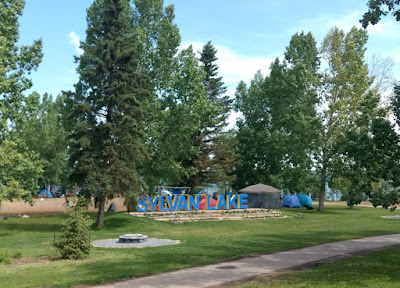 We hugged the eastern shore of the lake as long as we could before heading up and north on RR 15, where we had an even more close up view of the hills. This road turned out to be full of little surprises too: an actual “machine”--giant alien-looking tractor--and a weird segment of what I think was muskeg. The skies to the northwest were turning black. Would we make it back to our seagull friends before the shitstorm hit? 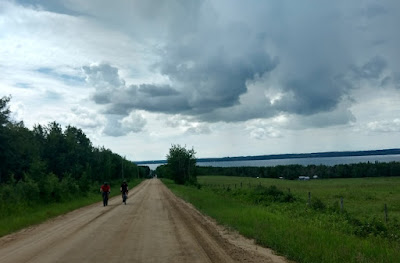 As we got closer to Gull Lake, the cottage scene there felt downright quaint compared to Sylvan, probably what Sylvan was like 30 years ago. This may have been second-tier cottage country but it was more my style.

In the end, our timing was impeccable. The darkening clouds opened up and lightning split the sky just as were finished loading the bikes back on the car.

But our little trip wasn’t over. We drove into Lacombe for a final pitstop: Blindman Brewery, reason enough alone to drive 1.5 hours and a fitting conclusion to the day--bending a few at a micro-brewery is the perfect way to wrap up a micro-adventure. 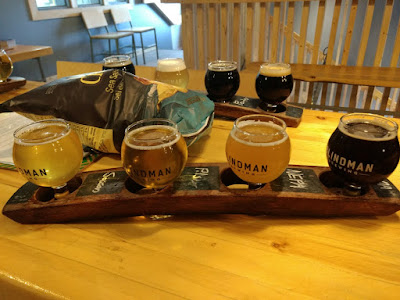