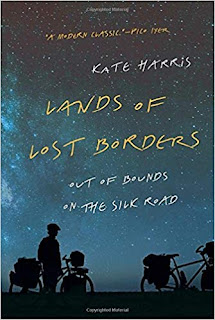 “Travelling by bicycle is a life of simple things taken seriously: hunger, thirst, friendship, the weather, the stutter of the world beneath you.”
--Kate Harris

Kate Harris’s Lands of Lost Borders: Out of Bounds on the Silk Road (2018) opens in medias res: the author and her friend Mel Yule, both recent university grads, are stealth-cycling in the dead of night as they attempt to sneak across the border between China and Tibet. Harris conjures up a magical scene with her poetic account of the stars “freshly soldered above the dark metal of the mountains.” The brilliant episode captures the mixture of fear, astonishment, confusion, and, most of all, the thrill of venturing under cover of darkness into forbidden territory.

It’s a terrific opener to what is a very fine travel book by this promising young writer who grew up in Ontario, studied at North Carolina, MIT, and Oxford, travelled extensively, published an impressive string of magazine pieces about her adventures, and now lives off-grid in remote Atlin, BC.

The book tells the story of two bicycle trips made by Harris and Yule, one in the summer of 2006 in China and Tibet, and then a longer one in 2011 from Istanbul across the old Silk Road route through Armenia, Azerbaijan, several ‘Stans, China, Nepal, and ending at the Siachen Glacier near the India-Pakistan border.


But there’s a lot more going on in this book than mere bike trips. Harris claims, at one point, that her trip was essentially an extension of her Oxford thesis on “how borders make and break what is wild in the world.” And the book offers a compelling blend of her research on the history of exploration and borders together with elements of memoir, philosophy, travel writing, of course, and even bits of poetry.

As a travel writer, Harris is the real deal. She’s observant, thoughtful, clever, and philosophical, not to mention remarkably well-read, both in the sciences and humanities. One of the many pleasures of the book is the wonderful connections Harris makes between her reading life and her cycling life. For instance, her observations about the historical and metaphorical connections between cycling and flight (by both birds and humans) neatly tie together her reading of nineteenth-century history of science and invention with her personal experiences of riding a bike. (Even if she gets a few of the details of early cycling history wrong.).

Although the long Silk Road trip is the main focus of the book, the first quarter is mostly background--the story of Harris’s childhood adventurousness, her obsession with all things to do with Mars, and the highlights of her young academic and personal life. I found this part went on a bit long for my liking; Harris offers more information than we really need about her romantic and academic relationships. We get the gist: she was a precocious youngster, ambitious, bold, with a hunger for knowledge and experience, from a young age treasuring both books and bicycles, for where both could take her. The rest of the book recounts the longer Silk Road trip, returning often to the themes of borders and exploration. In between the stories of encounters and adventures en route (tough slogging in Turkey, red planet-like landscapes in Uzbekistan, red tape in Azerbaijan), Harris drops a lot of names from the literary and scientific tradition, relying on a couple of well-known guides in particular, Marco Polo and Charles Darwin; and some lesser known ones too, such as Rebecca Solnitt, author of the splendid A Field Guide to Getting Lost, and the Frenchwoman Alexandra David-Néel, who snuck across a few borders herself while travelling through Tibet in the 1920s. For me, the most intriguing inspiration for Harris is Fanny Bullock Workman, the amateur naturalist who cycled sections of the Silk Road with her husband in the 1910s and wrote a book about the trip, Two Summers in the Ice-Wilds of Eastern Karakoram (1917).

Harris can write, no question. There’s often poetry in her prose, like in this account of night sounds on the Tibetan Plateau: “Outside, cicadas clattered metallically in the dark, a chorus of spilled cutlery.” But at times there can be something a bit precious about Harris’s slightly over-earnest Chatwinesque philosophizing:

We long our whole lives for things we’ve never known, places, we’ve never been, abstractions that come alive to us in unexpected ways. What does the Silk Road have to do with Mars, except everything? Perhaps the great task of modern explorers is not to conquer but to connect, to reveal how any given thing leads to another: the red planet to the Silk Road, bicycles to the moon . . . .

I can’t quite tell if this is poetic and profound or corny and forced. Maybe a bit of both?

This book has gotten a lot of buzz--awards, glowing reviews, high praise almost everywhere. The cover features blurbage from no less than Barry Lopez, Colin Thubron, and Pico Iyer. That’s heady company, especially for such a young writer. (Harris is 35.)

As good as this book is, I found myself occasionally wearied by its earnestness and jam-packed allusiveness. (In one stretch of a couple of pages, Harris references Catherine Janeway of Star Trek, Shakespeare, Emerson, Shelley, and the Dalai Lama.)

But I look forward to her next book, whatever that may be about, where I hope to see in her writing a little more experience, dare I say even a touch of cynicism, and, perhaps, a realization (one that often comes with age) that the “simple things” don’t always have to be taken quite so seriously.