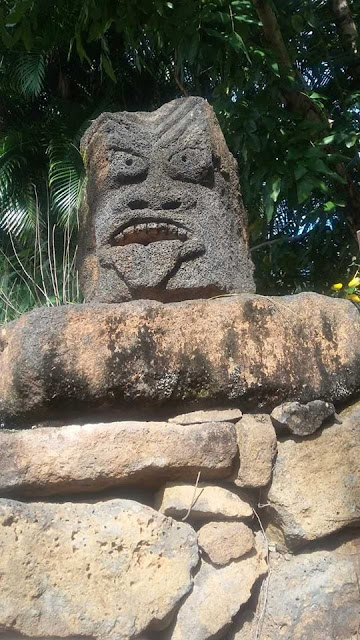 My favorite ride in Maui was an early Sunday morning jaunt from Kihei up to Wailuku and Kahakuloa, on the north coast of the Western side of the island. While the entire West Maui loop is a classic ride, the southern section sees a lot of car traffic, so I decided to try an out and back to the more remote northern portion of that loop, a stretch known as the Kahekili Highway. It was a good call. The roads around Kahakuloa are stunning—super twisty, single-lane, up and down, with breathtaking views of the ocean and the valleys running down to it. Plus it was the least trafficky road I encountered on Maui. But the ride was also kind of weird, complicated by some ominous notes that brought back some childhood memories for me.

Some of you may be old enough to remember that episode of The Brady Bunch where the family goes to Hawaii. In this three-part episode, the family encounters the expected clichéd Polynesian activities (hokey hula dancing, an interminable luau, a Don Ho cameo, a dramatic surfing scene) as well as some spooky intrigue. The youngest Brady boy, Bobby, walking by a construction site, picks up a small tiki idol that turns out to be cursed with an “evil taboo,” as a Hawaiian elder explains, and as the incidents of bad luck pile up, the Brady lads decide to go on a secret quest to return the idol to its rightful home and quell the curse. I remember parts of these episodes so vividly, especially the cliffhanger spider-on-the-bed scene. Until arriving in Hawaii, I hadn’t thought of these Brady episodes in decades, but it all started to come back to me.

My ride started out just fine. Up early, I beat the traffic across the island and, as I would on any Sunday morning ride, stopped at McDonald’s for coffee. I was tempted by the local specialty of SPAM, rice, and eggs but ended up just stuffing a pie in my back pocket for later.  Heading out of Wailuku, the terrain shifted dramatically, from town to country. Cars began to disappear, outnumbered by chickens, the road kicked up, and that’s when things started to go all Brady Bunch on me. 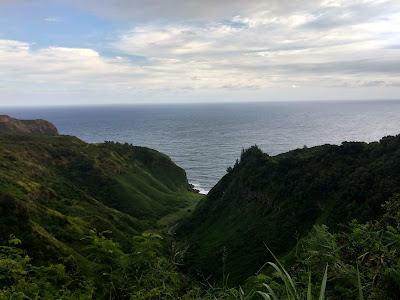 When I pulled over to check my phone, I saw that I had lost cell service. Then I looked up and realized I had stopped just below a stone carving of an angry tiki idol perched atop an old dry-stone fence. He seemed to be looking right at me, and he wasn’t happy. Had I, like the Brady boys, unwittingly violated some sacred burial ground? I didn’t think much of it at the time, but later, it was hard not to see this as the moment things started to go all “taboo” on this ride.

A little further on, I stopped again, this time at a lookout to take some photos, and a blue Tacoma pulled over, passenger window rolled down. A dread-locked dude in a fluorescent vest said he was part of a search and rescue mission, looking for a cyclist who had gone missing nine days ago in this very area. The dreads guy gave me his card and asked me to keep an eye out for anything unusual, and, in what was, I think, a macabre attempt at black humor, he said to pay attention for any unusual smells “besides the usual rotting pig.”

Okay. So I was to watch/smell for the evidence of the rotting carcass of a dead cyclist. Nice. This road was full of steep twists and turns—any number of places a descending cyclist could misjudge a corner, fly off the road and end up in a deep gully, never to be found. Had the cyclist been cursed by the tiki dude? And what’s with the rotting pig? That’s a thing around here?

This development darkened the mood of the ride. Every corner I took, at every creek and ravine I crossed, I steeled myself for the sight of mangled spokes and bloody spandex. And then, somewhere deep in my mind I thought, well, if it happened to that other cyclist, what’s stopping it from happening to me? That’s when I realized I had no map, a phone that didn’t work, and I was riding a rented bike with unfamiliar brakes. And I had left my wife only the vaguest information about where I was going for my morning ride. Should l have left a trail of popcorn from my condo, a la Greg Brady leading the boys to the spooky cave?

Distracted as I was by this missing cyclist business, I was still dazzled by the scenery. This road was a stunner, wrapping its way along the coast, appearing for a stretch, then disappearing into the rocks and trees. And the valleys below the road were shockingly green.

Then I saw the pig. 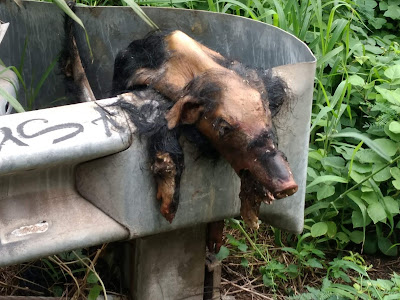 It was dead, had been for a while, splayed out over top of a metal traffic barrier next to the road. At first I didn’t realize what it was, though, I never seriously thought it could be a human. But I’d just been at luau the night before, and I recognized this carcass from the pig roast. It didn’t smell as bad as you might think.

The traffic free road that had previously been wholly a good thing now became a bit creepy. Where was everyone? Maui was a busy island. At the top of a long climb, I saw a sign for Curley’s Fruit Stand, one of the few amenities on this road that I had heard about in my research. I pulled over to investigate, hoping to top up my water supply and maybe score a pineapple. 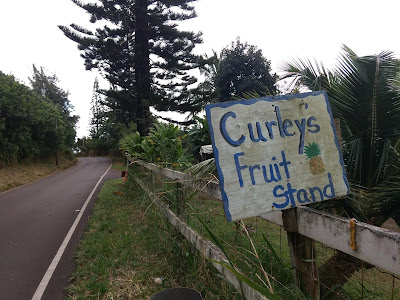 But something wasn’t right here either. Although the place looked semi-inhabited, there was no sign of any Curley. I did see a peacock strutting around what looked like the main service desk and an enormous, possibly dead, old dog laying on the ground behind it. First, a cyclist goes missing. Then Curley. What’s going on? I asked myself. Could it be foul play? Or is this road really cursed?

I remembered a story I’d read about the fierce old King Kahekili, from around these parts, who once built a house out of the skulls of his enemies. And I recalled Professor Hubert Whitehead, the Vincent Price character in the Brady Bunch episode, a dastardly archaeologist who traps the Brady boys in the burial cave. I imagined Fruit Stand Curley locked up somewhere in a fruit cellar made of pig skulls. I decided to forget about my pineapple treat and hightail it out of there. 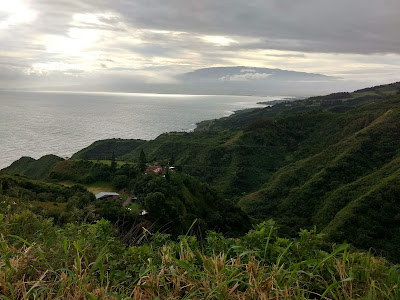 A crazy theory was starting to form in my runaway imagination, though it may not have been much more than a hunch. Hawaiians’ curious fondness for SPAM is well known. The grocery store has aisles of the stuff. But what’s really in SPAM? Travel writer Paul Theroux, while visiting the South Pacific, theorized that SPAM’s popularity there was due to how it approximated human flesh, and, therefore, appealed to Polynesians’ supposed cannibalistic tendencies. What if Mauian SPAM consists of the remains of murdered fruit vendors, with a side of wild pig? Sam, the butcher, indeed.

Just as I was starting to get really paranoid about this ride, I was startled by the sight of a cyclist coming up the very road I had been on. Then another, and another. Soon it was a whole bunch, clearly out for some kind of group ride or century. Then my phone buzzed. Cell service was back. The taboo, apparently, was lifted, and with it, my mood.

I never did hear what happened to the missing cyclist or to Curley, for that matter, but just as things worked out in the end for the Bradys, they worked out for me too. Too bad I've lost my appetite for SPAM. 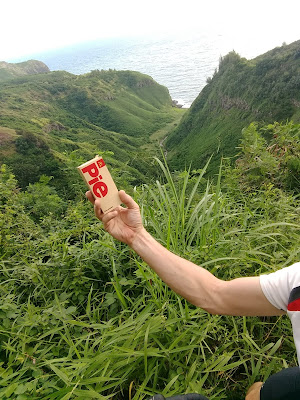