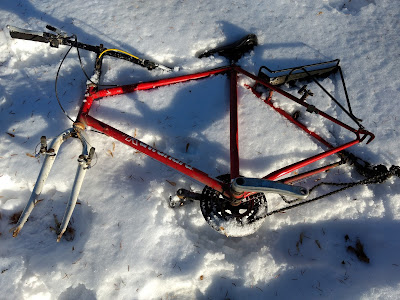 My winter commuting bike died last week. It was a red and white Kuwahara mountain bike, fixed fork, circa 1987, which I purchased second hand (more likely, seventh hand) for $80 from Edmonton Bicycle Commuters three years ago. The bike was, by any measure, a piece of crap, and always had been. But I had grown fond of it and feel a little sad that it’s now toast, its scavenged carcass splayed out in my backyard.

I admit I did very little to maintain this bike. Okay, I neglected it. Abused it, even. Apart from providing the occasional squirt of lube on the chain and swapping out the odd cable and housing, I ignored its well being. Over those three years, I spent maybe $40 on maintenance. So its demise was not a shock. Winter riding around here is brutal on bicycles. The elements are going to do their thing, especially when you don’t take basic care to clean and maintain winter machines. My approach, as unsustainable as it sounds, has been to think of winter bikes as long-term disposables. 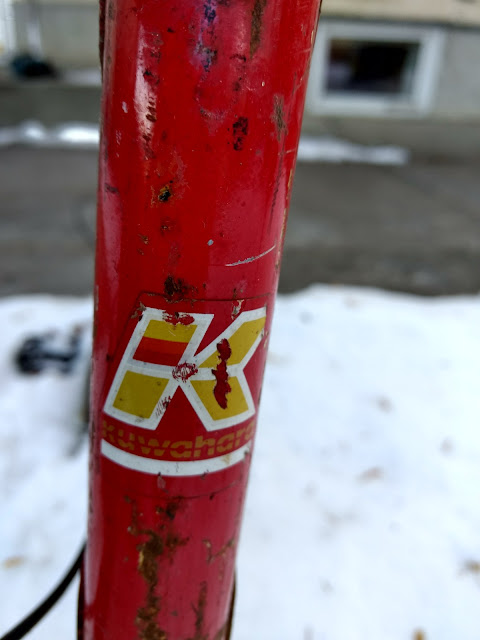 What did surprise me, though, was how various parts of this bike disintegrated at precisely the same time in a kind of grandly orchestrated complete and total failure. The drivetrain, not surprisingly, was the first to go. The cogs started slipping whenever I tried to accelerate, and the chain would fall off several times each day. (Note the photo of the rusty grease stain on my mitt, from putting the chain back on many times.) It took me an embarrassingly long time to realize that a couple of rings on the freewheel had lost some Chiclets. And the front chain ring was shot too, all shark’s teeth. There was no point in replacing the chain. 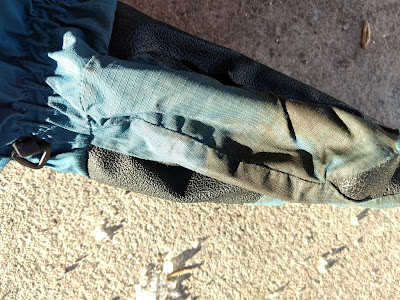 Then, around the same time, I began to notice stiffness in the headset. Soon the stiffness hardened into all out crunchiness; the handlebars would barely turn at all. That’s when I noticed that the frame was rusting out as well, the joints showing signs of bubbling corrosion. It was as if the cancer (if I can characterize my totally preventable neglect as a random disease) was metastasizing from one vital organ to another. 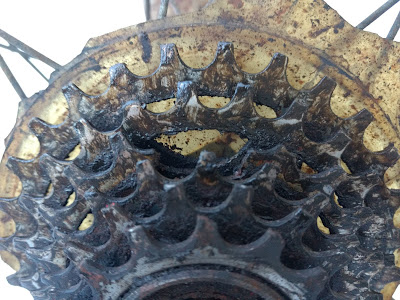 With two major components of the bike in need of wholesale replacement, and the frame beginning to go, I knew what I had to do. Replacing all those parts, even with used ones, didn’t make much sense. The money, the time--I’d be better off cutting my losses and buying another $80 crap bike, which might last me another three years. It was time to let my Kuwahara go.

Although it’s true that I wasn’t very nice to that bike, neglecting its basic needs, running it into the ground, I did genuinely like it, in the way one might “like” a scrappy, old farm dog one has systematically neglected. The goofy Roller Ball Stem, the dinged up fork, the scratched up paint job—I had come to appreciate the bike’s 80s weirdnesses and marks of character.

In the end, the Kuwahara was an organ donor, of sorts. I stripped off the studded tires and harvested a few parts—one pedal, a brake straddle, a couple of non-stripped bolts. I went to EBC and found another winter commuter, this one a Raleigh Ambush, pretty much the same vintage, and got to work making it winter ready. It’s functional, but it’s no Kuwahara. I’d like to think that I’ll take better care of this winter ride, but who’m I kidding?

Meanwhile, the carcass of the Kuwahara, in full death pose, remains out back, looking stately, battle-scarred, and vaguely prehistoric. I think I’ll leave it there until spring. 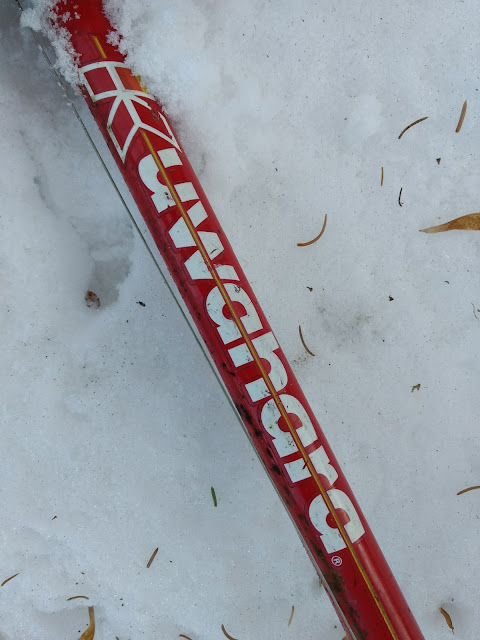