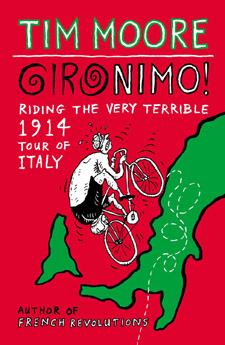 Tim Moore is a funny guy, a talented writer, and the author of three popular cycle-travel books. His first, French Revolutions (2001), recounts Moore’s hilarious attempt to ride—with virtually no training—the route of the 2000 Tour de France. I loved that book’s very British brand of eloquent profanity, self-deprecating humor, and (also very British) anti-French satire, as well as its entertaining tidbits of Tour de France history and mythology. That formula worked so well that Moore went on to apply it to the second-most-famous grand tour, the Giro d’Italia, and the result is his thoroughly entertaining Gironimo! Riding the Very Terrible 1914 Tour of Italy (2014). (No, Moore’s third cycling book is not about the Vuelta. It’s called The Cyclist Who Went Out in the Cold: Adventures Along the Iron Curtain, and I have to admit I haven’t read it.)


The twist this time around is Moore’s decision to reach back 100 years and trace the route of the 1914 Giro, which is generally recognized as one of the most brutal grand tours ever, with its combination of monster stages, attempted sabotage, and horrendous weather. Eighty one riders started the race in Milan, but only eight finished there 3162 km later. The average stage length of 396 km is mind boggling, especially considering the gravel roads and mountain passes that made up much of the route. Some riders took close to 20 hours to finish some of the stages.

And, for the sake of some kind of perverse authenticity, Moore decides to ride the route on a 1914 bicycle, to boot. His 1914 Hirondelle No. 7, largely assembled by Moore himself, features brake shoes carved out of pieces of wine cork, tubeless tires, not-entirely round wheels, a disintegrating saddle (the “scrotum stabber”), and countless rattles, squeaks, and squawks.

The subtext to this premise is Moore’s contention that today’s pro tour riders are a bunch of spoiled babies compared to the resourceful and stoic hard-men of a century ago.  With their carbon-fibre bikes and e-shifters, countless attendants and lackeys (not to mention elaborate doping regimens), today’s riders have become overly specialized, pampered sissies willing to abandon at the first hint of bad weather, mechanical issue, or runny nose. Moore’s compatriot and Tour de France winner Bradley Wiggins is the poster child of this trend, in Moore’s view, and “Lord Wiggo,” as Moore styles him, is the butt of many a barb directed more broadly at today’s professionals.

For Moore, the foil to Sir Bradley is Alphonso Calzolari, the diminutive, working-class, journeyman rider who somehow endured the cruel conditions and overcame all manner of obstacles to win the 1914 race. Moore spins out an engaging double narrative, shifting back and forth between the story of Calzolari and the eventful 1914 Giro alongside Moore’s own comic-heroic adventure.

(The book contains a selection of Moore’s own trip photographs (in black and white in my paperback edition), including several selfies showing the author in his ridiculous period-specific kit. These photos, which have the feel of amateur pics from a travel blog, are somehow perfect.) 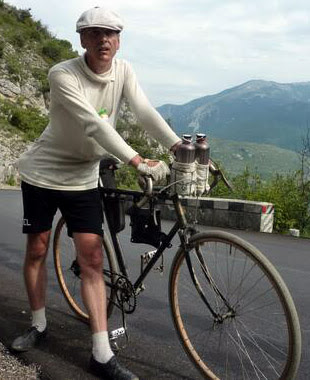 Despite all of Moore’s self-mockery, he’s not a hapless cyclist, by any stretch. The distances and speeds he manages on a hundred-year-old bicycle are impressive. And while the focus of the France book was Moore’s disintegrating body, this time around it’s the bike that’s falling apart, not the rider. (The cover shows Moore wobbling and sweating his way up a mountain, but the truly remarkable—and terrifying—feat is descending on such a machine.) In fact, the Hirondelle No. 7 is the true comic hero of the book, constantly breaking down yet somehow defying the odds to ride another day. This aspect of Moore’s enterprise is something most readers won’t be able to fully appreciate, as technology has made us all Lord Wiggos in our own ways:

Do you own a bicycle manufactured in the twenty-first century? If so, I would ask that you go and kiss it full on the saddle, right now. My everyday ride is a decade-old ladies’ hybrid bought second-hand off eBay for forty quid, chosen largely for its lack of theft appeal. Yet this machine is capable of taking me up and down hills in all weather, in ease, safety and comfort—doing all this while requiring no maintenance beyond a monthly squirt of air in its tyres. You know a Victorian cyclist would say to that? He’d say, HOLY FUCKING SHIT.

Just as Moore’s first cycling book is full of amusing sarcastic commentary about France and the French, this book pokes much fun at Italy and Italians: horrible drivers (“Fiat-driving granny hit squads”), pushy prostitutes, rude mechanics, and unavoidable odours. (“Italy never smells of nothing,” Moore tells us. “In the airless dry heat of days gone by I’d inhaled aromatic nosefuls of herbs and barbecue. Now, after a little splash of rain to freshen up the biological juices, it was shit and death. Outside Sestri, the stench of brewing nappies gave way to slow-cooked farmyard ordure, and then—as the road wound ominously upwards—extra-mature roadkill.”)

Like the 1914 Giro itself, Moore’s book is longer than it needs to be. Some of the early chapters, which tell the origin story of the Hirondelle, go on a bit for my liking, though the more mechanically inclined may well enjoy these parts. But once on the road, Moore quickly finds his form and he’s wonderful company—funny, self-deprecating, and genuinely insightful.

I liked this book better than French Revolutions, for the same reason that I prefer the Giro over the Tour de France: it’s weirder, more audacious, kind of ridiculous, and, for all those reasons, more glorious, more beautiful, more heroic than its more famous cousin.