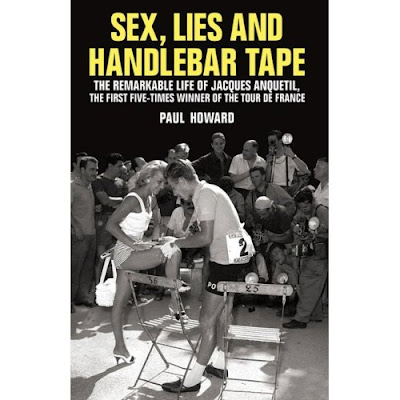 Before reading this book, all I really knew about Jacques Anquetil is that he was the first man to win the Tour de France five times, that he dominated cycling in the years between the reigns of Fausto Coppi and Eddy Merckx, and that there was some kind of incestual monkey business in his personal life. Paul Howard’s clever title for his 2008 biography of Anquetil is a nod to the Steven Soderbergh movie of 1989, Sex, Lies, and Videotape, in which a disturbing but strangely arresting James Spader films various women talking—just talking—about their sexuality. That film was compelling but gave me the creeps; the same can be said for Howard’s book about Anquetil’s life. The Frenchman was a great champion and an enigmatic character, but like Spader’s character, a complicated and curiously sympathetic perv. All of which makes Anquetil’s story one worth telling—and re-telling.

Howard explains how there are at least three images of Jacques Anquetil in the public imagination. The first is that of the high-living “James Bond of Cycling,” as some called him, a handsome womanizer who drank like a sailor (unlike rival Louison Bobet, for instance, who, according to Raphael Geminiani, “would think for a whole week before drinking a beer”), ate everything an athlete shouldn’t (steak tartare was his standard pre-race fare), stayed out until the wee hours, yet still rode coolly to victory the next day. (When he turned up for his mandatory stint of military service at the Rouen barracks 1954, he’d sent ahead 30 bottles of champagne. Even then, he knew he had a reputation to live up to.)

You’d think such a reputation would make Anquetil popular, but there was a competing counter-image of him as an aloof, dispassionate cyclist, one who raced conservatively (relying on his superior time-trialling abilities to win grand tours), and who hated training and once even claimed that he didn’t really like cycling and just did it for the money. He also spoke remarkably candidly about drug use in cycling, in a way that shocked his peers.
But Howard argues that this image of the unlikeable, inscrutable Anquetil was not entirely warranted, that, for instance, most of his fellow cyclists remember him as a gracious, even generous competitor and colleague. But it is, nonetheless, an image that has stuck.

The third image Anquetil is the disturbing one of a kind of Woody Allen of the cycling world, thanks to Anquetil’s bizarre, pseudo-incestuous post-cycling love life: he not only had a child with his 18-year-old step-daughter, Annie, he had a (consensual) three-way relationship with both Annie and her mother for 12 years! Then, he out-Woodied Woody Allen, by having a romantic relationship with his step-son’s ex-wife, Dominique.

The trick with a biography like this is separating Anquetil the champion bike racer from Anquetil the retired bike racer with an unconventional sex life. It might be tempting for a biographer to overplay the sensational elements of Anquetil’s second act, but those sordid details have little to do with the champion’s racing career, and Howard knows enough to keep them separate.

Howard dutifully takes us through Anquetil’s long list of palmares. Although it may be ungracious of me to say so, winning the Tour five times somehow doesn’t seem quite so impressive now as it did in 1964, given that so many others have since accomplished the same feat (Merckx, Hinault, Indurain, and Armstrong, if we’re counting him).

For me, the most interesting part of all this was his decision not to race the Tour after number five. He essentially got bored of winning the Tour (in the way only a Frenchman could) and this led him to attempt something even more audacious in 1965: the double of the Dauphiné Libéré (a short stage race) and Paris-Bordeaux (the longest one-day race in cycling at the time, over 600 km). The catch? The latter started the same day the former ended—and 600 km away. It was an outrageous scheme and the fact that Anquetil even tried it belies the overly-simplistic public image number two of Anquetil as a phenomenal cyclist who lacked the flair of a truly great champion.

The story of the rivalry between Anquetil and his arch-rival Raymond Poulidor is one of the best parts of the book, and, in fact, it’s a story worthy of a book all of its own. (I can imagine a treatment like Richard Moore’s Slaying the Badger, about the rivalry between Bernard Hinault and Greg Lemond. There’s a French book by Jacques Augendre, Un Divorce Francais: Anquetil et Poulidor, but no English one that I know of.)

Poulidor, of course, was the perennial second banana to Anquetil, yet French fans loved the runner up’s passion, aggressive racing style (he had panache in spades), and vulnerability in a way they never quite took to Anquetil’s aloof imperviousness. It drove Anquetil nuts that Poulidor made the same money he did, but you can see why the promoters always wanted them together. The tension between them was a more powerful draw than either rider on his own. Howard makes the compelling case that Anquetil was driven by a pathological desire to beat Poulidor rather than to win races, though he usually did both.

The sensational post-cycling life of Anquetil is bizarre and pathetic, and it’s hard not to see his excessive drinking and incestual dalliances as some screwed up attempt to fill the bike-shaped hole in his life. I found it strange that Anquetil abandoned cycling once he retired. He claimed that he only ever got on a bicycle a couple of times the rest of his life. How incredibly sad.

The story of Anquetil’s life has been told several times already. There are three French biographies as well as Anquetil’s own memoir, one by his lover/stepson’s ex-wife, Dominique, and one English bio by Richard Yates in 2001. So why does this story need telling again? Because of Sophie. Anquetil’s daughter from his relationship with Annie published her own account of her father in Pour l’amour de Jacques (2004).  Howard relies heavily on Sophie’s book as well as extensive interviews with her. There may not be much new to say about Anquetil’s bike racing career, but his complicated personal life is another story. Howard weighs in on that, with some perceptive insight, due in part to his cross-channel distance from the events. He has a measured way of sifting through the biased comments of Sophie, Dominique, and others, offering an even-handed assessment of both Anquetil’s career and whacked-out love life.

As is often the case with athlete biographies, by the end I was wondering if it had been a good idea to read it at all, to allow my simplistic notion of a great athlete, based mostly on a list of accomplishments and newspaper headlines, to be replaced by a fuller, darker, more complicated portrait. But a good sports biography, like this one, forces us to reconcile the two, to see both the champion and the full, flawed human being. In the world of sports, and literature, for that matter, that’s all you can ask for.