Harold Bindloss (1866-1945), it turns out, was born in Liverpool and lived most of his life in England. But as a young man he had travelled to the Canadian west, and, years after returning home, he drew on his prairie experiences as the setting for novels. English readers must have found this backdrop exotic. And that romantic western setting combined with familiar plots involving mounties, wayward remittance men, hardy settlers, and bored Englishwomen journeying through the margins of the colonies tapped into some deep colonial mythologies--enough so that Bindloss went on to make a living as a novelist.

Unbeknownst to Penn and I, Val had downloaded a copy of Prescott, of Saskatchewan on his phone before we set off on our trip, and one night, around the fire, when the beer had run out, he treated us to a dramatic reading of the first chapter. To be honest, I was ready to take a merely ironic pleasure in this text--the kind of terribly dated genre fiction that's so bad it's good fun to read. So imagine my surprise when I actually liked-liked what I heard from Val that night.

When I got back to Edmonton I tracked down an old hard copy of the book and read it, quickly, continuing to take an embarrassing pleasure from almost all of it. The landscape of the prairies and the people who are settling it are, indeed, so full of promise. Prescott, of course, is the hero, a "Canadian" who is honorable, resourceful, and unpretentious--in contrast to most of the soft or shifty or morally suspect English characters. (Plus the female characters, in particular, can't help but notice the "physical perfection" of Prescott.)

The actual hamlet of Bindloss, however, turned out to be mostly a sad place today. Located on the desolate Buffalo Trail, Highway 41, where on any given day you're bound to see more pronghorns than people, Bindloss now contains only a couple dozen buildings, many of which are disused or utterly ramshackle. The United church is shuttered. The recently built school appears to be abandoned. As we pedalled around the two short streets, searching in vain for plaques about the place's namesake, we felt a bit like intruders---that the locals must have seen us coming and fled indoors to hide behind their curtains. We didn't see a single soul there. (I felt even more depressed later in the day, when, down the highway in Empress, we discovered that we had been pronouncing the name wrong. Not the Germanic pronunciation of Bind (rhymes with who-has-seen-the-wind) and loss, but rather Bindloss  as in rhymes with "mindless.") 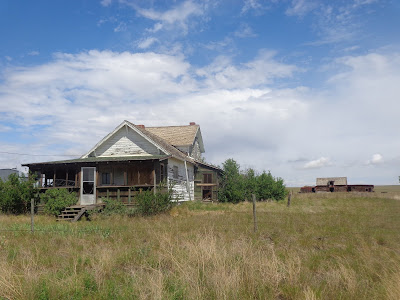 The industrious, thriving, frontier world of Harold Bindloss's novels is long gone (if it ever really existed). But while the human part of this settlement may be sad now, the prairie landscape evoked by Bindloss a hundred years ago still holds power. I'm not sure "promise" is the right word for it anymore, with that word's implications of human ambitions. The empty prairie of this part of Alberta is a reminder of something much larger. Humans come and go, but the grass and sky run on forever. 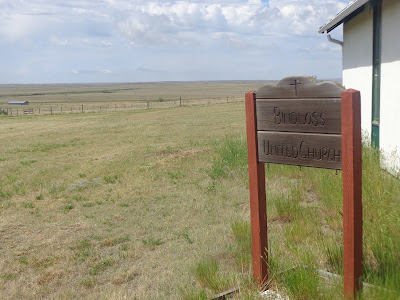