In Praise of Crap Bikes 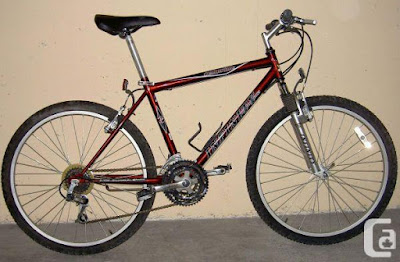 Let’s hear it for the crap bike! The Supercycle! The Infinity! The clunky Schwinn, the rusty Nishiki, the rattly Norco!

These bikes are, for the most part, total horseshit, manufactured out of cheap, heavy materials and bottom end components, then slapped together by department store workers who know nothing about bicycles. In car culture, you’d   call them “beaters”—old, dented, scratched rides that get you from A to B, most of the time, and roll with the understanding that you won’t be spending much money or time on maintenance. When they expire, you just go on kijiji and find a new one.

Yet every cyclist needs a crap bike in the garage. (And the fact that you can store your crap bike in the garage, as opposed to in your house, is just one of the many virtues of the crap bike.)  Crap bikes, for all their undeniable crappiness, are essential. Flashy, expensive, nice bikes are fun to ride, sure, but crap bikes make the cycling world go ‘round.

Despite their horseshitiness, or perhaps because of it, crap bikes are worry free, even liberating.  You don’t have to fret about someone stealing your crap bike; there’s always a nicer bike around for prospective bike thieves. You can ride your crap bike to the 7-Eleven and just lean it against the window while you grab a Slurpee. It will be there when you get back. I do carry a piddling, featherweight lock when I’m on my crap bike, more for show than anything—none of this heavy kryptonite business you need for your nice bikes. Crap bikes allow you to travel light and stress free.

Crap bikes have character too. High-end bicycles are purebred show dogs—high performance, brag-worthy but temperamental, high maintenance, and expensive to keep happy. Crap bikes, meanwhile, are mongrels; what they lack in pedigree they make up for in personality, dependability, and loyalty.
Not all crap bikes are equally crappy, however. True, most crap bikes are wonky rides, all squeaks, clicks, and wobbles. But there is a special category of crap bikes, Awesome Crap Bikes, which consist of old machines that were once nice bikes but now, because of age and, perhaps, neglect, have a thick sheen of crappiness that belies a solidness, a genuine quality underneath. Awesome Crap Bikes provide the best of both bike worlds: a stress-free, relatively smooth and dependable ride.

Awesome Crap Bikes often possess a funky retro quality. My son’s Kuwahara crap bike, for instance, features an elliptical chain ring (remember that fad from the mid ‘80s?), a “Rollerball stem,” and a goofy wide saddle. He used to complain about its clunkiness now gets how it works for him. All the nice bikes at his school have been picked off the racks by thieves, but his Kuwahara remains unmolested—if still elliptical. Now he even appreciates the street cred a crap bike can confer. The crappier the ride, the cooler it is.

I’m not saying I want to ride my crap bike in a Gran Fondo or across the country, but it’s time someone spoke up for the rusted, warped, and neglected underbike, an essential part of cycling life, and, in its way, as worthy of song as any ride out there.
Posted by Jasper Gates at 11:03 PM