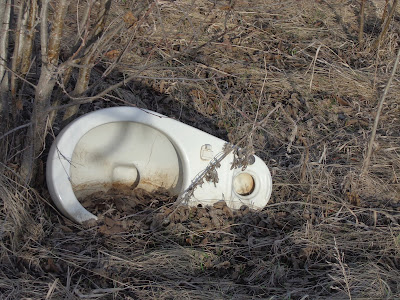 What is it with all the toilets?

Riding my bike, I see all manner of trash and treasure along the roadsides, especially at this time of year, but in the past couple of weeks I’ve noticed something really strange: an alarming number of discarded toilets in the ditch.

The one above I spied beside a remote country road south of Edmonton. At first, when I rode by it, I mistook the toilet for a rogue snow drift, which had miraculously resisted the spring melt. But it was too white for spring snow, so I stopped, got off my bike, and took a closer look. The crapper had broken into several chunks, and the parts were scattered in a kind of porecelain splash pattern. On closer inspection, I concluded that this main bowl section may well have been sitting in the ditch for a while, possibly a few years. 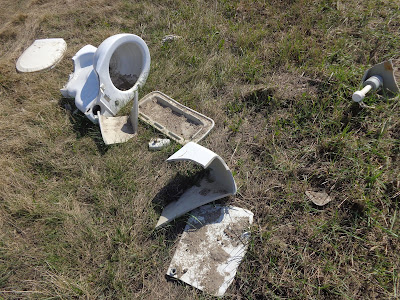 This second one I encountered near the intersection of highway 60 and the Whitemud, just north of the Enoch Reserve. It’s much more visible than the first one, plonked randomly into a farmer’s field, like some porcelain meteorite. Hundreds of cars must pass it each day; I wonder if they can even tell what it is.

It’s slightly unnerving to see toilets in the wild like this, out of context, divorced from their natural habitat. I saw a similar thing in my recent visit to the high desert of southern California, where I saw plenty of toilets outside where I wasn’t expecting them. The artist Noah Purifoy must have liked the weird juxtaposition of utilitarian plumbing fixture and natural landscape. The brilliant whiteness of the porcelain can give a toilet a surprising aesthetic quality, like a marble sculpture. 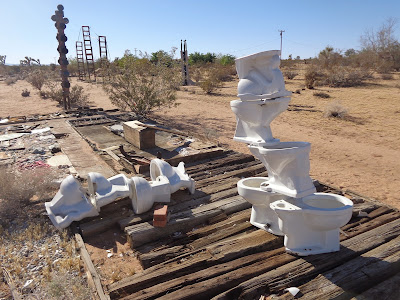 As with so much of the odd crapola I see at the side of the road, the first question that comes to mind is this: How did it end up here? The most obvious explanation is that the toilets either fell off a truck or were pushed off by yahoos who thought it’d be hilarious to dump a shitter on the roadside.

But I have another theory. Could someone be going around liberating toilets, setting them free from their domestic prisons, only to discover that, like domesticated bunny rabbits let loose in the wild, these footloose crappers don’t stand a chance in traffic? That they’re destined to become sanitation roadkill?

Sure, it’s all garbage, and, like all roadkill, sad in its way, but I will try take a page from Noah Purifoy’s eccentric book and see these toilets, popping up like mushrooms, as more than the litter of civilization—as strange pieces of found art. In spring-time here, after the snow is gone and before the brown world turns green, I’ll take whatever flash of shiny white the ditches have to offer.