Santa Claus, at least in his modern-commercialized form, is almost exactly as old as the bicycle. Some would argue that our image of Santa as jolly-fat-man-in-a-red-suit was invented by American illustrator Thomas Nast, who, in 1863, created illustrations for Clement Clarke Moore’s 1823 poem “A Visit by St. Nicholas” (aka “’Twas the Night Before Christmas”). These illustrations in Harpers magazine helped establish the image of a rotund, bearded, mischievous St. Nick.

Meanwhile, the earliest version of the pedal-driven bicycle, the velocipede or “Boneshaker,” was invented just a few years later in France and/or Britain, depending on which origin story you believe. By the end of the 1860s, velocipede fever had gripped Paris, New York, and London.

In a sense, Santa Claus and the bicycle grew up together in the late nineteenth century. Both captured the imagination of the late Victorian Age. And although the jolly fat man is generally associated with another form of travel altogether, he was, in those final decades of the nineteenth century, depicted aplenty on cycles of various kinds. It may seem an odd combination but it’s not, really. Santa Claus doesn’t look so different from the kinds of men so often depicted astride cycles in the 1880s and 90s, with their beards, pipes, bugles, and quasi-military costumes. 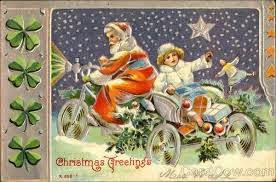 The full-size tricycle is the obvious practical choice, perfect for an unathletic, elderly gentleman with serious cargo-hauling needs. 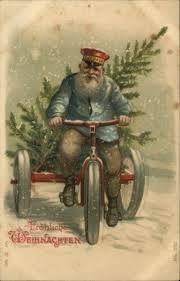 This Germanic Father Christmas looks more Captain Highliner than Kris Kringle but get a load of the fat man’s fat tires! 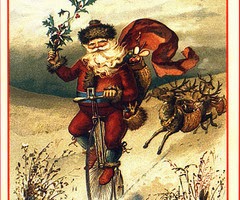 This rare pennyfarthing-riding Santa is a classic, with jolly St. Nick leaving his sorry-ass reindeer in his powder. Forget magical Rudolph and gang. Santa Claus as bearded man-child is discovering the true freedom of wheeling. 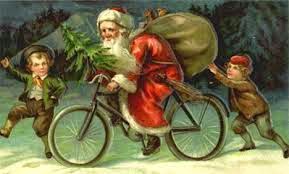 Victorian Santas often have a dishevelled, semi-homeless look about them. After all, Moore’s poem compares St. Nicholas to a pedlar. This particular hobo Santa reminds me of the homeless dude who rides up and down my alley all winter with a garbage bag full of empties slung over his shoulder. As for the children prancing about him, well, they seem more demented leprechaun than jolly elf. Grimacing Santa seems a little disturbed by them—as he should be. 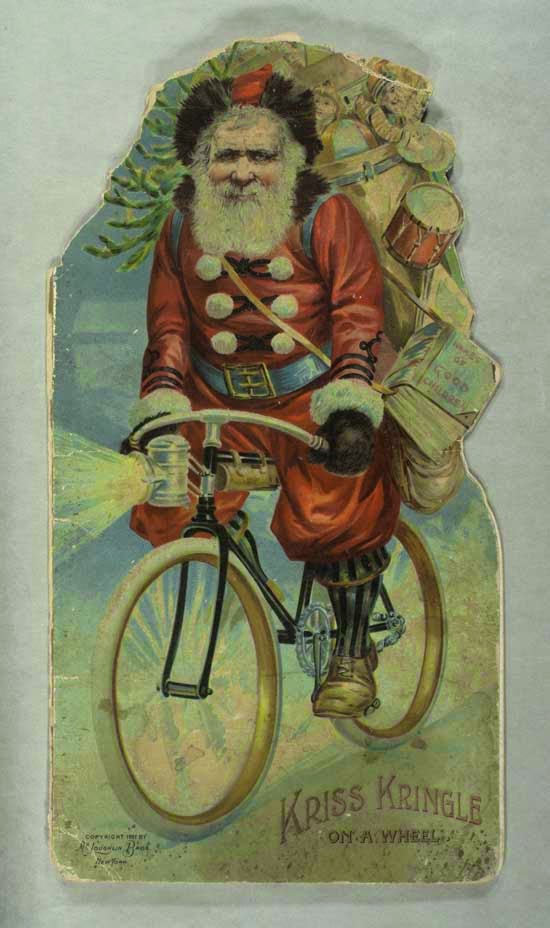 This is my favorite cycling Santa—he looks sort of homeless too, but in a cool way, with his nicotine-stained, Walt-Whitman beard and those gentle, mischievous eyes. This loaded down Santa looks strong and confident; he could roll all night. Plus, check out that pimped out ride: gold rims,white tires, hipster handlebars, frame bag, acetylene lamp. It really does make reindeer look like a lame Yuletide ride.