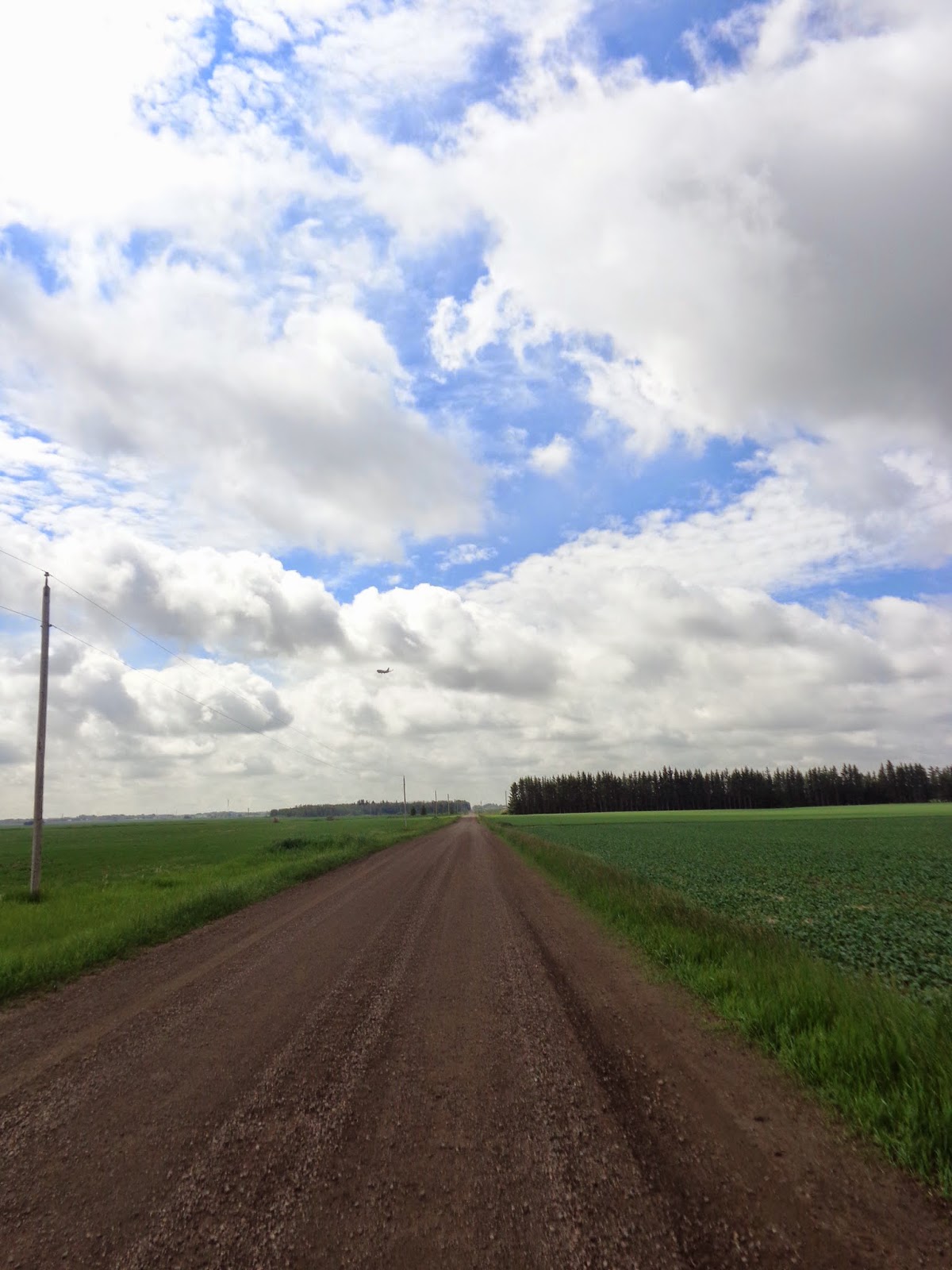 I did this one day last week. As I was packing my wife’s suitcase in the car, I threw my fatbike on the Yakima. After the drop off, I took the back road out of the airport and within a few minutes was parked at a little pull off on a quiet range road a few kilometres west of the airport grounds. It’s almost all gravel out this way, a sleepy grid of dusty roads through flat farmland.

I wondered if anyone looking out an airplane window could spy me on my fatbike, cruising down the middle of a gravel road. It was a muggy, humid, sticky day for these parts, but my spirits were light; the planes were coming in for landing, but I felt like I was taking off. 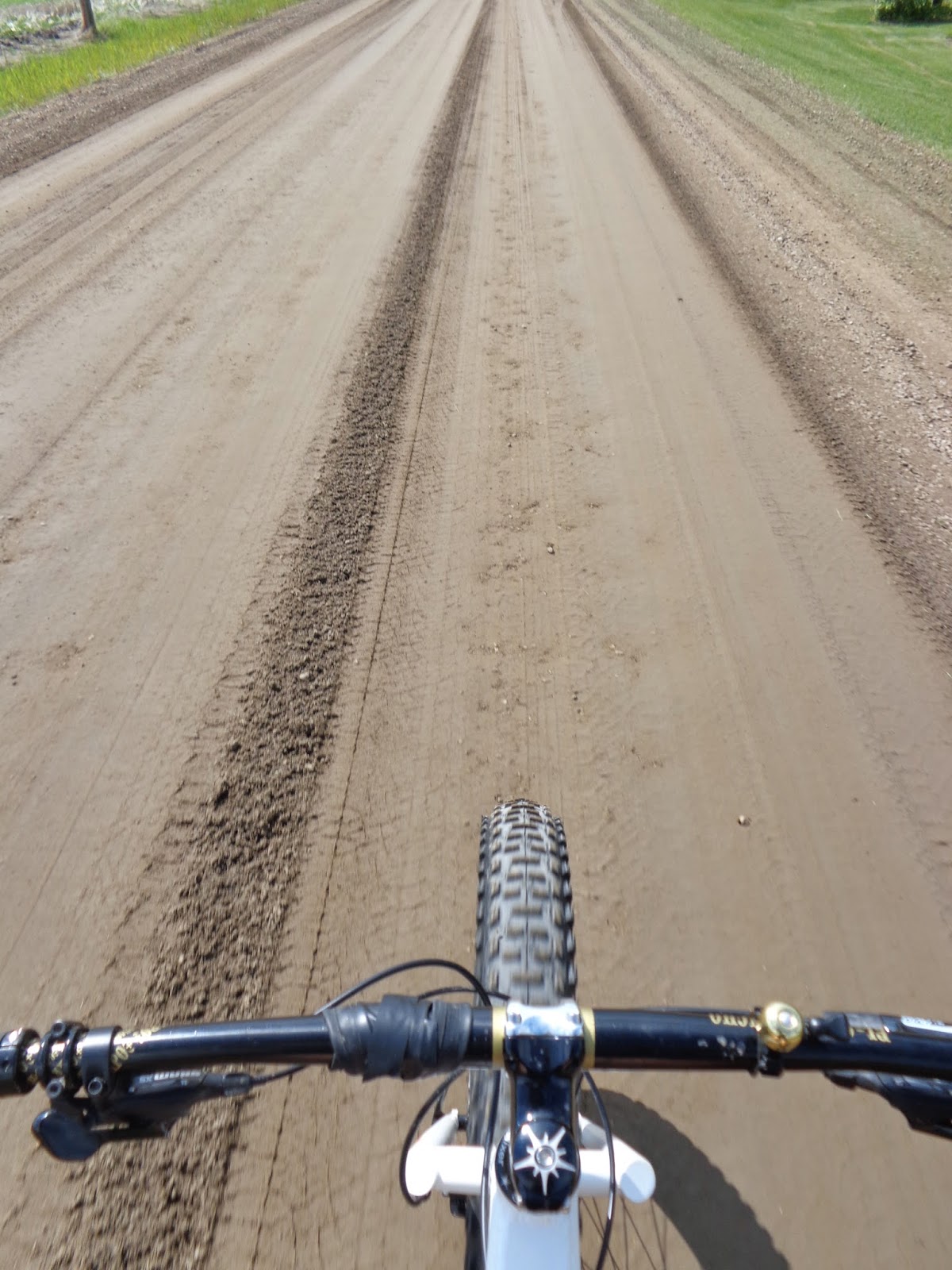 I’d mapped out a 30-km loop around two landmarks I remembered from previous excursions out this way: a couple of quaint, country churches. The landscape here has that prairie sameness—green fields, occasional yellow canola bursts, widely separated clusters of farmhouses and barns, cows, horses. This time of year, it’s mostly vivid, green lushness. Small country churches are a sporadic feature of the rural Alberta landscape, one that stands out against the usual rural architecture.

These are not village churches, not part of any obvious community but rather stand-alone jobs that seem to exist in the middle of nowhere. You can usually spy these churches miles off, by a spire or small bell tower and often a tell-tale cluster of trees, generally evergreens, which stand out in this mostly aspen parkland.  The trees are often planted around a cemetery next to the church. I imagine that people travel from miles in all directions to gather here on Sundays, or they did at one time.

When I’m riding, I find it hard not to stop at these rural churches. I consider them rest stops of a sort. You can usually find at thesm shaded grassy patches to sit down and take a breather and maybe have a bite to eat. Although I am not much of a churchman myself, I do find these churchyards peaceful places. Like Philip Larkin, in his famous poem “Church Going,” I feel something—albeit bemused, detached—at these places. I know what Larkin means when he says of stopping at rural churches: “It pleases me to stand in silence here.” 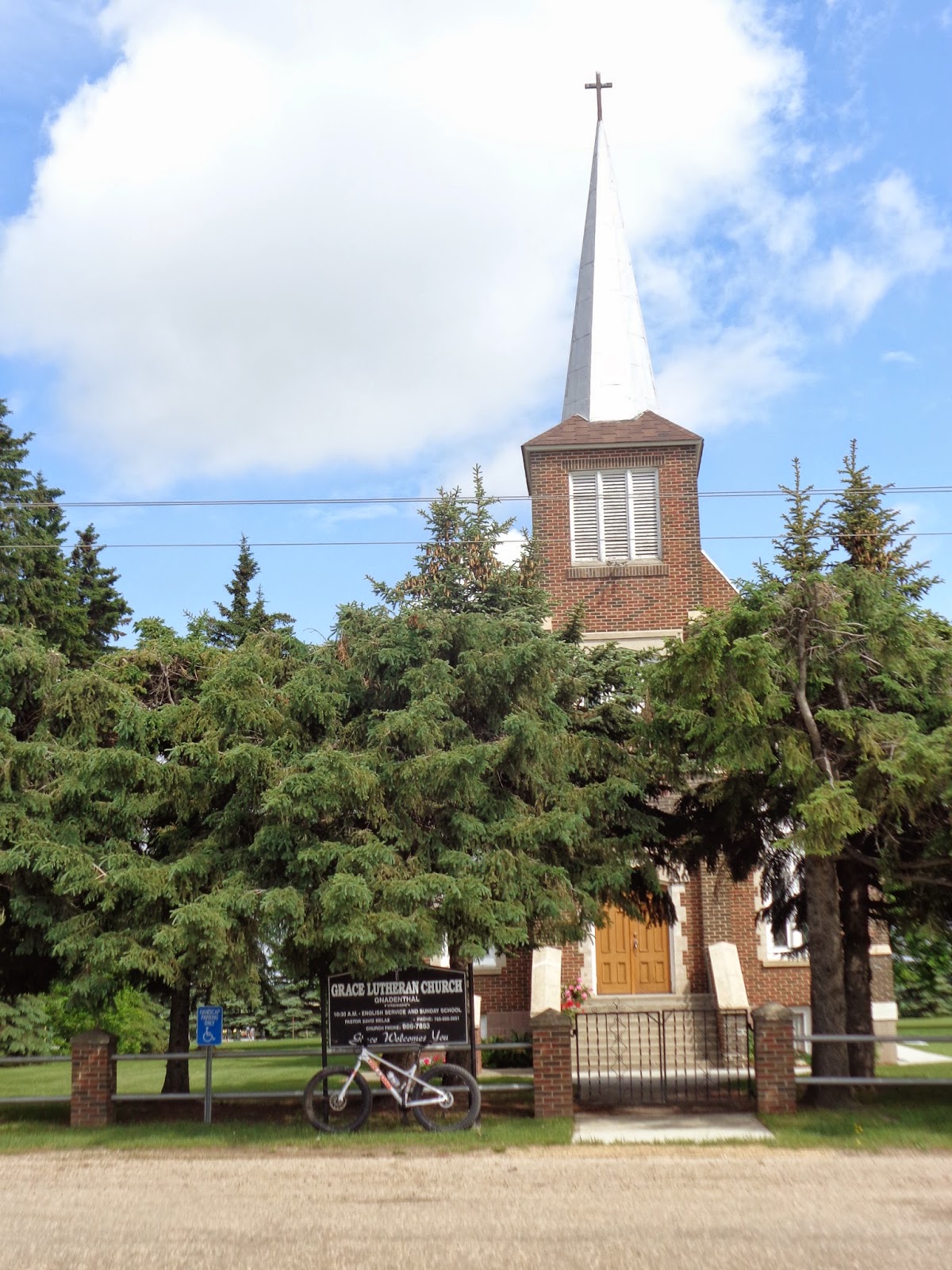 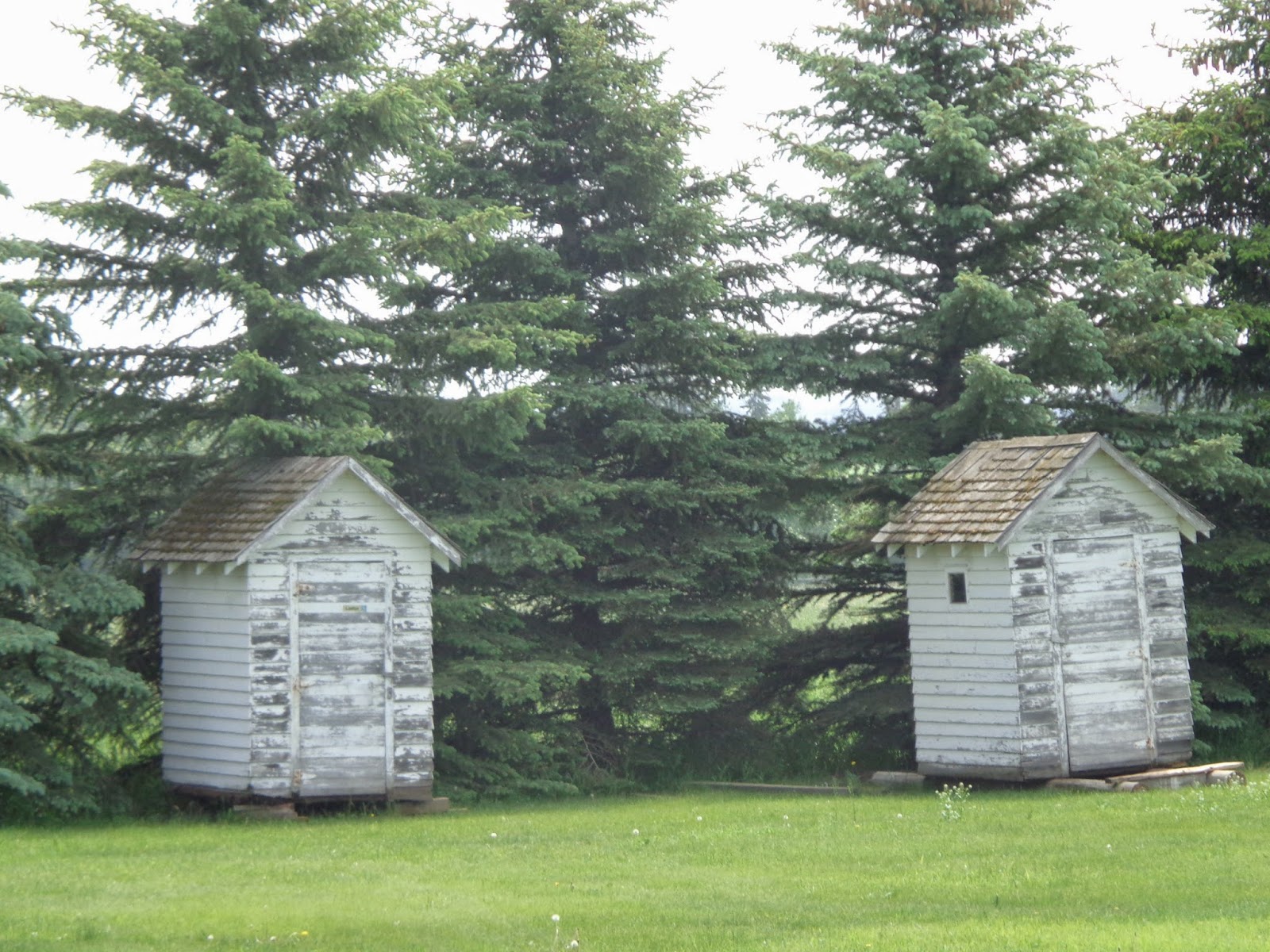 Church number one is Grace Lutheran or Gnadenthal built in 1947. (While the Ukrainians have the corner on churches to the northeast of the city, the Lutherans are plentiful out this southern way.) Gnadenthal is a classic instance of the central Alberta country church: spire, trees, cemetery, plus a rectory-house next door.  There’s even rustic his-and-hers outhouses across the road in a clearing. The church and grounds are neat, tidy, well kept, as you might expect from descendants of industrious German immigrants. Services still run every Sunday, according to the sign out front.  The bench near the cemetery is a swell spot to take a load off and ponder the silent, Germanic headstones. 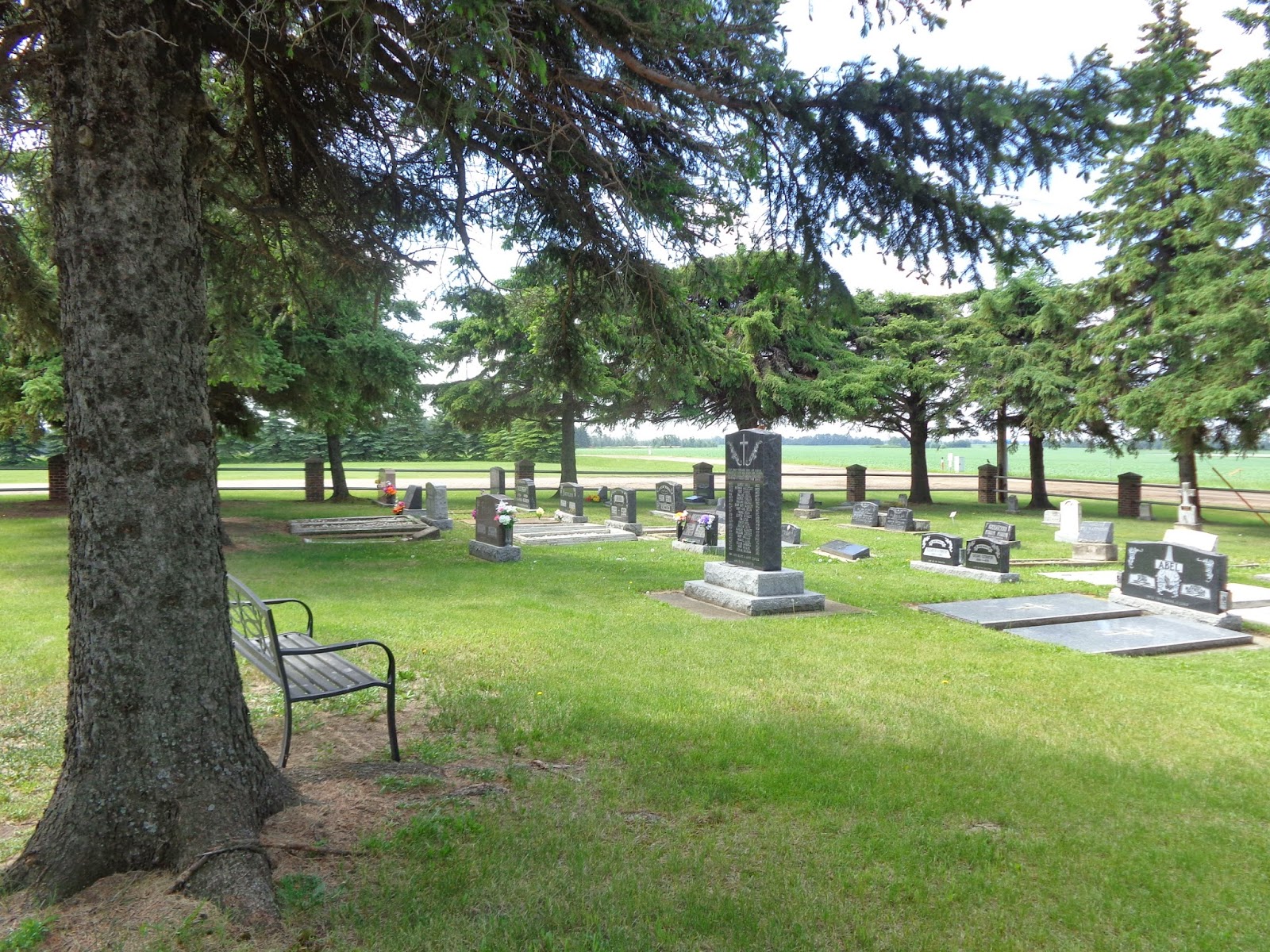 The semi-oniony spires of church two, Holy Trinity Ukrainian Catholic, are visible from a few miles away. This church is older, built in 1917, in rougher shape than Gnadenthal, slightly dishevelled or disused, as Larkin might say. I can’t tell if it’s still in operation. There’s no sign out front proclaiming the hours of a weekly service, but the grass has just been cut and the paint job can't be more than a few years old. 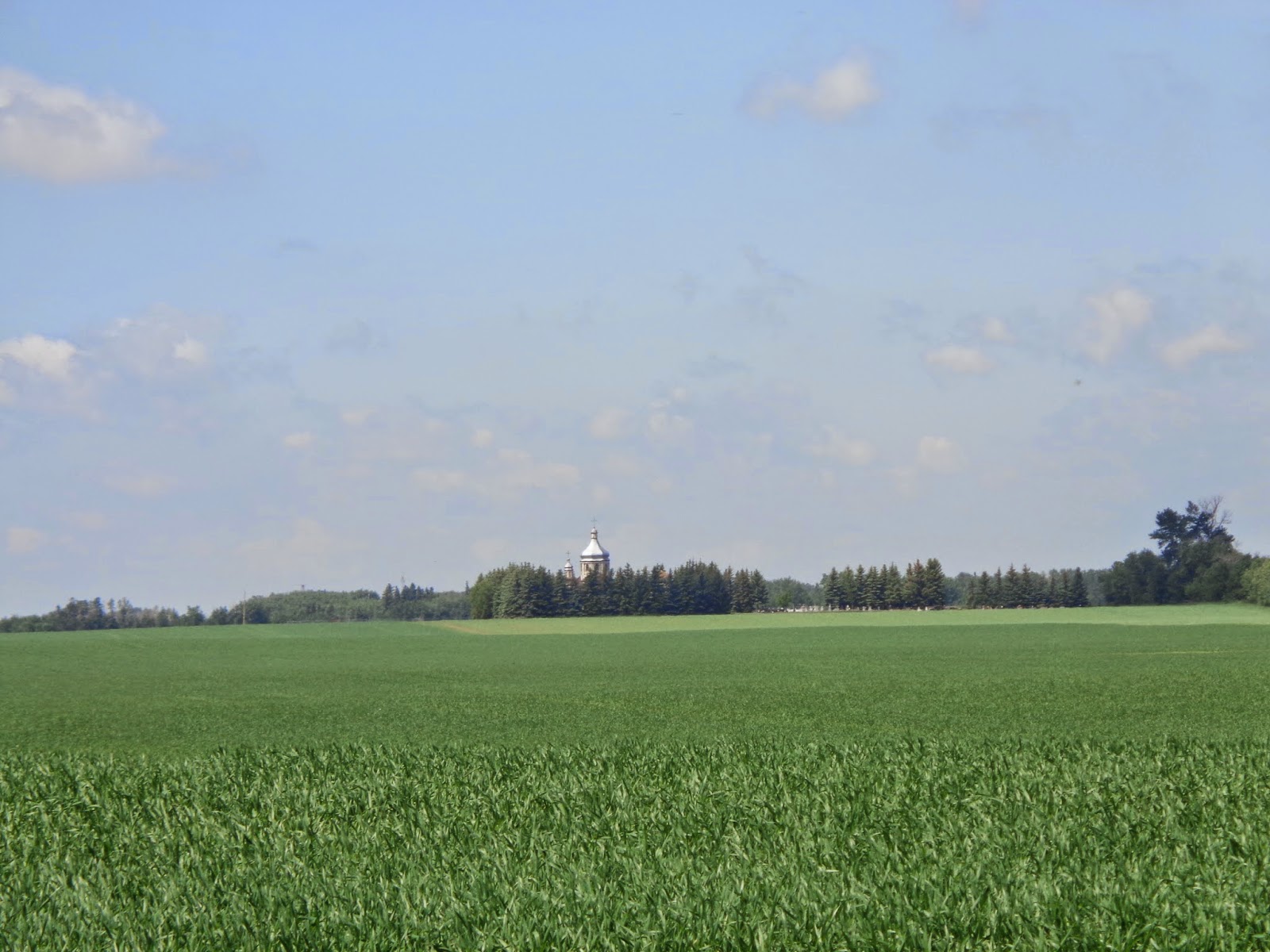 I peek into the bell tower next door, to find that squirrels have colonized the place, larding it with hundreds of chewed up cones. (No clue where these Ukrainian Catholics go to the bathroom around here; maybe there’s a facility inside the locked church building. The Lutherans are up front about such matters; for Catholics, such concerns may be yet another mystery of faith.) Still, there’s something impressive about this church too—its old stained glass, stately bell tower, and vaguely eastern air. 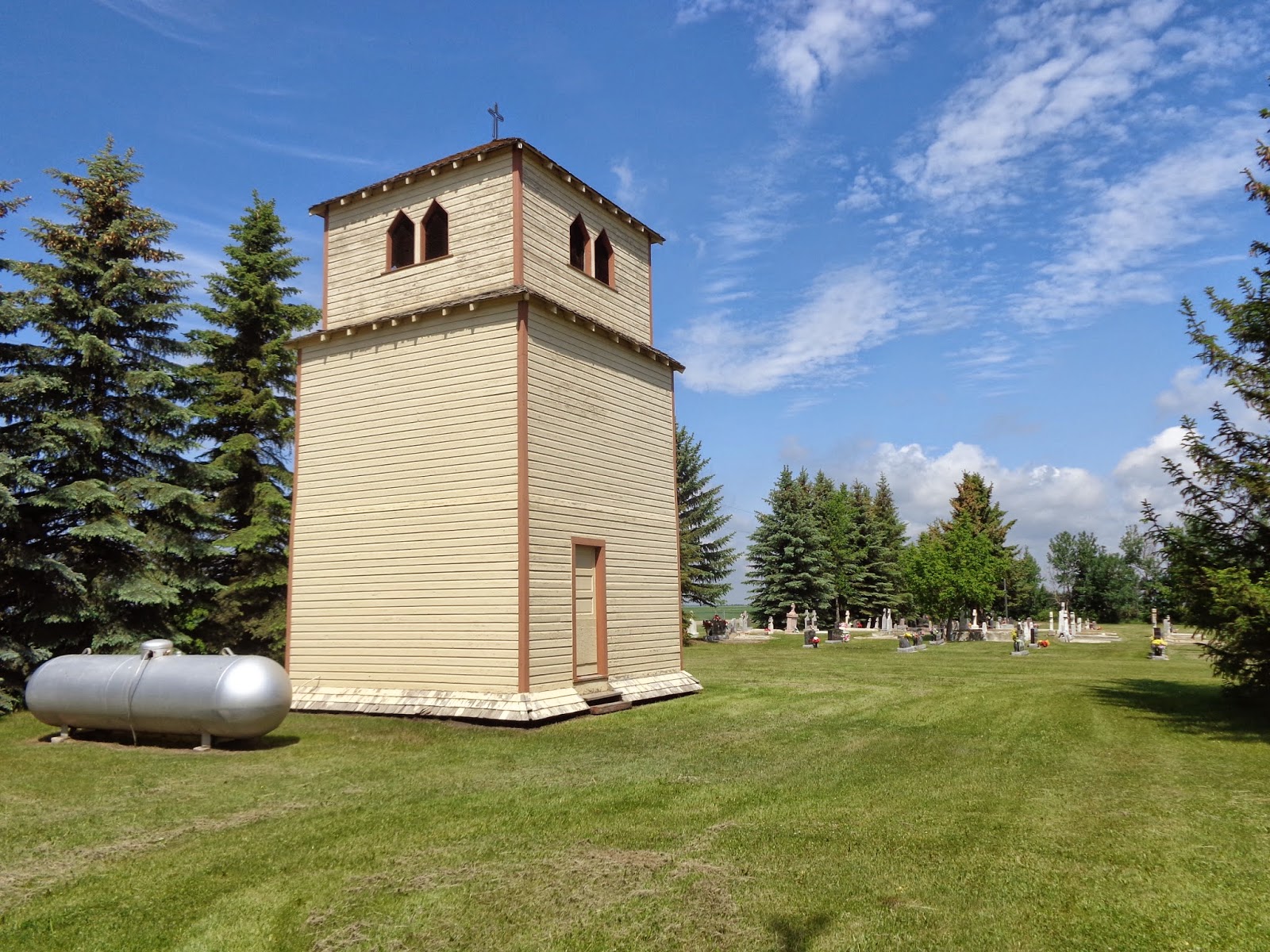 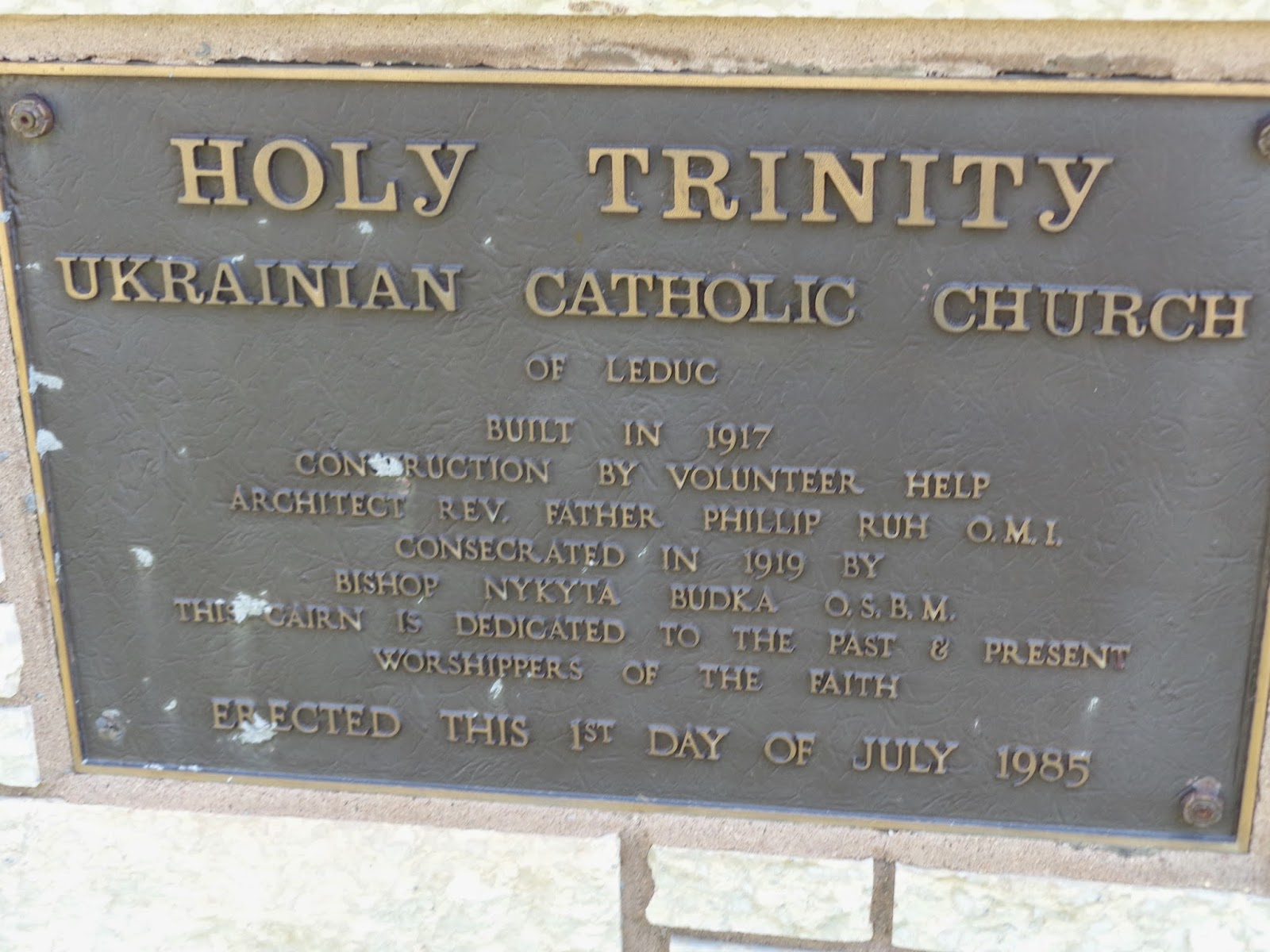 On the final leg back to the car, I pass an old farmer in a pickup truck coming my way. We exchange standard rural acknowledgements: a finger wave and a nod. I wonder if he’s Lutheran or maybe a Ukrainian Catholic from way back. Has he attended either of these churches in his day? Perhaps he’s just a respectful atheist like me, who’s glad these little churches still stand, even if they’re now frequented more by squirrels than by humans.

The drive back home is a good one. My airport trip has taken more than twice as long as usual, but it was an invigorating ride, rejuvenating even. How often can you say that about a trip out to the airport?