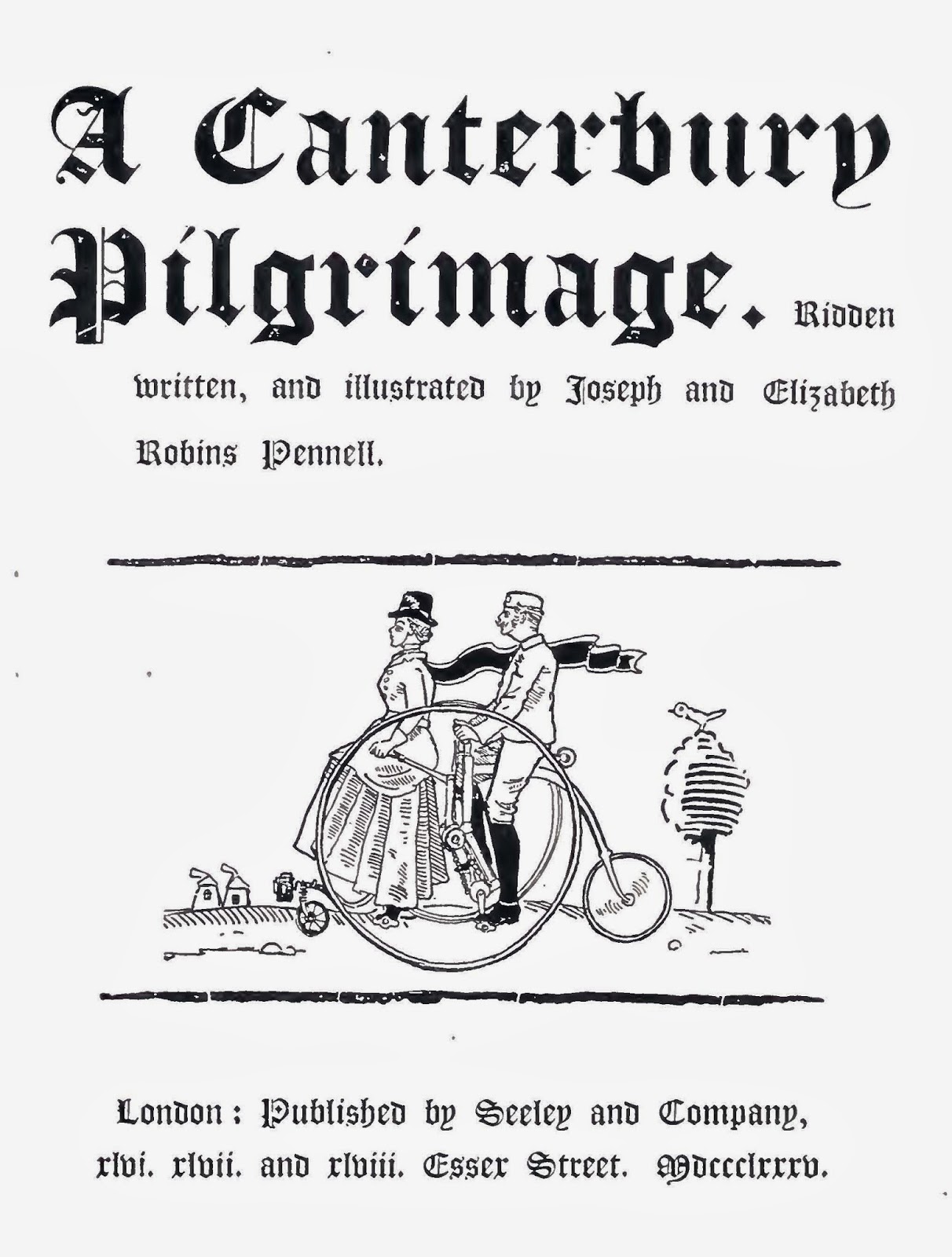 The history of cycle-travel literature—I mean Literature with a capital L, as opposed to arid itineraries of cycle trips—begins with the Pennells—the husband and wife duo of Elizabeth Robins Pennell (writer) and Joseph Pennell (illustrator and writer), from Philadelphia. In 1884, they settled in London, where they would stay for 30 years, producing countless books and magazine pieces about art and travel and food. But in their early years abroad, their shared passion was cycling, and they wrote extensively—both together and individually—about their cycle-travels in England and Europe, producing five books and dozens of magazine articles about cycling between 1884 and 1905.


In 1885, they published their first book together, A Canterbury Pilgrimage, a short (78 pages), charming account of their two-day tandem-tricycle ride from London to Canterbury Cathedral along the trail of Chaucer’s pilgrims in August of 1884, not long after they’d arrived in England. (They happened to arrive in London at the peak of the tricycle’s popularity; in the days before the rise of the safety bicycle, the tricycle offered a safer, more accessible alternative to the high-wheeler.) The book was a hit. Andrew Lang, in the popular Daily News, gave it a ringing headline: “The Most Wonderful Shillingsworth Modern Literature has to Offer.” And it remains a wonderful, modern, and thoroughly readable book today.

Elizabeth’s prose and Joseph’s illustrations capture the many pleasures (and occasional frustrations) of cycle-travel that anyone who’s ever done even an overnighter on a bike will instantly recognize. On their unwieldy Coventry Rotary tricycle, the Pennells do precisely what many cycle-tourists do today: loaf along windy roads, pass through sleepy villages, get close to Nature, and enjoy the quiet rhythms of rural life, picking up bits of conversation with regular folks—in their case, tramps, hop-pickers, farmers—along the way.  Elizabeth articulates, as well as anyone since, the transcendent moments of the cycling experience: “We rode on with lights hearts. An eternity of wheeling through such perfect country and in such soft sunshine would, we thought, be the true earthly paradise. We were at peace with ourselves and all mankind.”

The book is thoroughly literary but with a light touch; not surprisingly, it plays up the Chaucer connection, dropping allusions to the waypoints mentioned by Chaucer’s pilgrims and sprinkling in bits of middle English from the pilgrims’ tales. But the literary landscape of Kent features other famous writers too, and Elizabeth tips her cap to Charles Dickens and Shakespeare among others. The other prominent literary presence behind the scenes is Robert Louis Stevenson. The book is dedicated to him and his Travels with a Donkey in the Cevennes is an obvious influence. The Pennells channel Stevenson’s breezy, self-deprecating vibe. Call it Travels with a Tricycle. 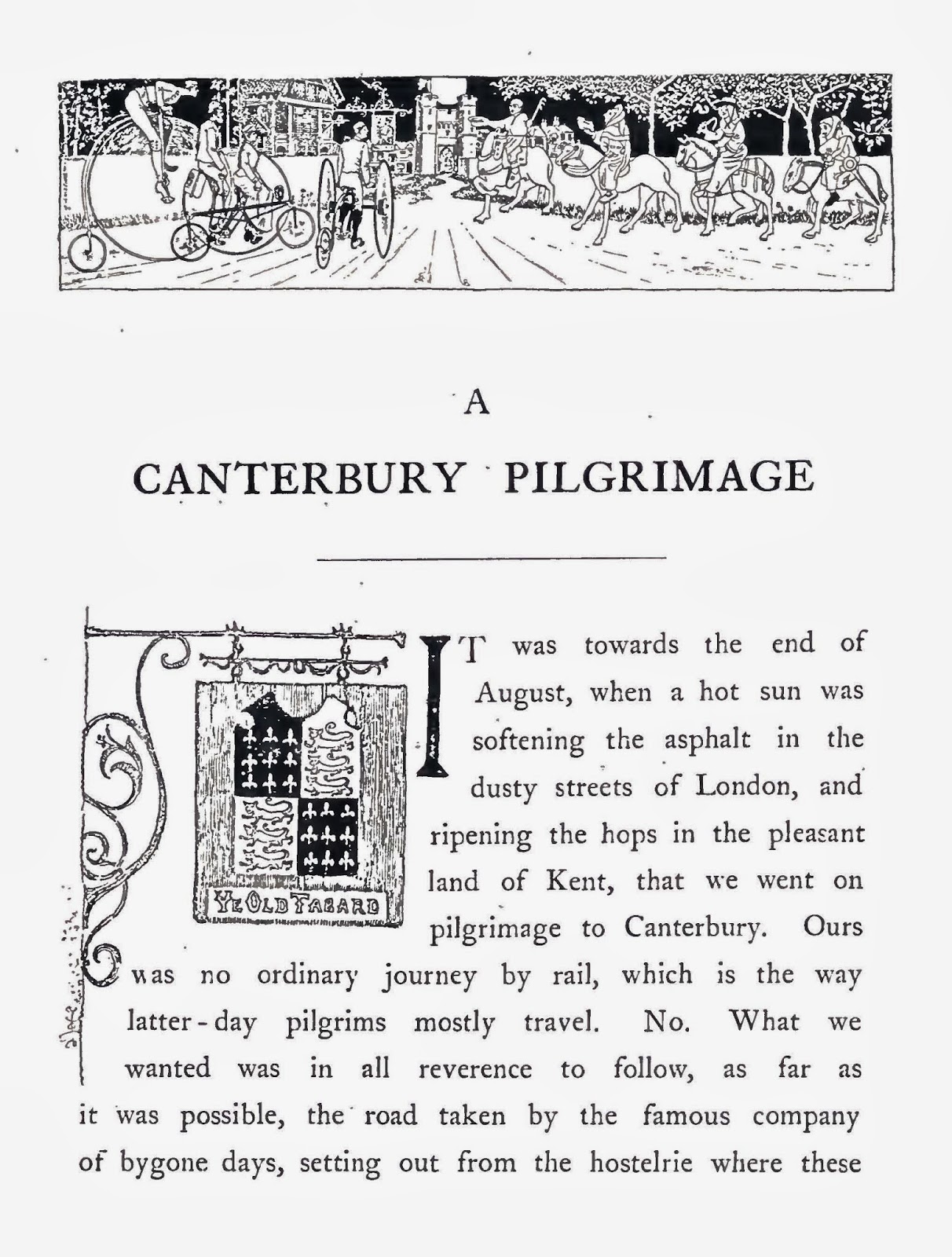 There’s a curiously modern feel to Elizabeth’s style, especially her often satirical attitude toward other cyclists. She was a great advocate for cycling, but that didn’t stop her from poking fun at the more pretentious of her fellow wheelmen. In this, she may well be the original of today’s Bikesnob. She mocks the many “scorchers” on the roads—über-serious cyclists concerned only with speed. Elizabeth insists that she and her husband are only semi-serious cyclists, cycle-tourists really, more interested in seeing things than in setting records.

At one point, she has great fun recounting a conversation with a particularly silly fellow cyclist at an inn in Sittingbourne. The London watchmaker, also travelling by tandem tricycle with his spouse, accosts the Pennells with the insulting refrain “I don’t like tandems, do you?” Then, in reply to the Pennells’ assertion that they are Americans, reveals the extent of his silliness:
‘From Canada?’ his wife asked.
‘Oh, no!’ I answered; ‘from Philadelphia.’
‘Dear me!’ the watchmaker said; ‘then you’re real Americans! But you speak English very well!’
Such daft characters were one inevitable product of the new cycling age, and Elizabeth’s descriptions of them sound strangely familiar today.

The Pennells went on to write two more tricycle books in the 1880s, about trips in Italy and France, each good in its own way. But neither has quite the same sparkle as A Canterbury Pilgrimage, which, being the first of its kind, contains something of the thrill of firstness, when cycle-travel was so new a thing—not just for the Pennells, but for the world.