Vélivre: A Bike Ride: 12000 Miles around the World 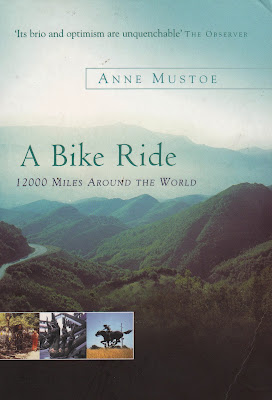 I love the modest title of Anne Mustoe’s 1991 cycle-travel classic. “A Bike Ride” suggests a jaunt, a lark, a spin maybe—so even with the much more impressive-sounding subtitle, we know we’re in the hands of a writer who, despite her impressive accomplishments, doesn’t take herself too seriously. It’s an endearingly British thing, this self-deprecation.

Mustoe’s story really is inspiring: at age 54, a widow with grown up step-sons, she left her job as headmistress of a girls’ boarding school in England and decided to head off around the world on her bicycle. She was, by her own admission, “not athletic”; in fact, she was “overweight, out of condition.” Although a seasoned traveler, she had never been “a keen cyclist.” Yet she got the idea in her head one day that cycling was the perfect way to go, offering the freedom and simplicity she was yearning for: “I should be breaking free, not only from my responsibilities but from life’s clutter.” Her goal? Simply to “dawdle in beautiful places.” It’s a narrative angle many of us can appreciate, if not emulate. To her credit, Mustoe soft-pedals the “personal journey of discovery” bit and simply gives us her informed, thoughtful, witty observations on her extremely long “bike ride.”

Quickly we realize just how determined Mustoe can be, not just to keep riding, but to take in the world around her, to relish every chance encounter, tailwind, and cup of tea. She’s ever the unflappable headmistress, shocked not by the shameless come-ons of Greek men nor even the large turd she finds under her bed in a shabby Pakistani hotel. She’s even got a way of making a rough hangover ride (that second carafe the night before in the Italian cafe was a bad idea) sound not that bad. Her pluck and optimism are refreshing without being over the top.

Though Mustoe is joined by various friends for a few short stretches en route, the book is very much a classic solo journey in the tradition of resolute Englishwomen abroad. (Her most obvious modern predecessor is Irishwoman Dervla Murphy, who cycled  much of the same terrain in the 1960s. Murphy’s book may be better known, but Mustoe is a much better writer.) She faces her share of predictable challenges, including numerous persistent “admirerers” along the way.  But these tend to come across as more comical than truly threatening, like the cheeky Islamabad waiter who follows her to her hotel room and attempts, Pyramus-style, to woo her through a hole in the glass of a small window in her room. She eschews the Thisbe role and instead threatens to call the police; her would-be Pyramus buggers off.
What sets this book apart from your average round-the-world cycling book is not only Mustoe’s determined optimism but also a charming blend of semi-scholarly history, vivid descriptions of encounters with locals, and spot-on accounts of the everyday challenges, joys, and tedium of cycle touring. (In this regard, Mustoe is a descendent, conscious or not, of Elizabeth Robins Pennell, whose cycle-travel writing from 100 years earlier shares the same features.)

She’s a classical history buff and offers just enough of Caesar and Claudius, the Via Flamminia and the Rubicon, to add a fresh (if ancient can be fresh) take on famous places without sounding too headmistressy. She’s obviously well read; the chapters feature epigraphs from Ovid, Shelley, cummings, and T.S. Eliot, among others. But she wears her learning lightly and shifts easily between this semi-scholarly stuff and candid renderings of life on the road.

Some large historical personalities figure prominently in her narrative—Caesar, Darius, Akbar, Aurangzeb, even Margaret Thatcher (!)—but none more so than Alexander the Great, whose own restlessness a couple thousand years ago inspires Mustoe’s for the first two thirds of the book. She follows his footsteps, off and on, across Asia. By the time she parts ways with his route in India, however, she no longer seems to need a guide.

Mustoe’s classical knowledge makes her accounts of Italy and Greece particularly memorable, but for me the best parts are the sections on cycling through Pakistan and parts of India. Unlike the Mediterranean, where Mustoe had visited many times, the Lower Indus was new territory for her, and her prose sparkles with the excitement of the new.

The first thing that struck me about Pakistan was the colour. The buses, lorries and scooter taxis looked like rides from a Victorian fairground. Green or red, they were painted all over with pictures and patterns in primary colours, trimmed with gleaming filigree chrome—chrome coronets, crowning the drivers’ cabs, rows of tiny chrome hearts or diamonds dangling on chains from the bumpers, and pennants, flying from every projection.
The people she meets in Pakistan are some of the poorest she encounters, but they’re also the most generous. Their hospitality—inviting Mustoe into their simple abodes—continually astonishes her and us. Her mode of travel seems to partly account for her grand reception. As one old man says to her, after offering her some cash, “You need money. You’re on a bicycle.”

Of course, Mustoe encounters lots of locals on bicycles during her travels, including a memorable trio of knock-off “Reliagh”[sic] bicycles decorated with artificial flowers and joss sticks. She has one slightly dodgy run in with a gang of “cycling youths” who follow her, poking, jeering, “squawking like flocks of highly strung cockatoos.” Luckily, Mustoe is saved by reaching back to her former headmistress authority; an assertive chastizing scatters the little rascals. Often her sea-green Condor bicycle is more of an “object of wonder” than she is. Strangers can’t keep their hands off her parked machine. (The same thing happened with Pennell’s tricycle in Italy in 1884.)

This book will probably be enjoyed by anyone who’s dreamed of doing what Mustoe did—of “breaking free” from the “clutter” of life for a while, and going  on a big, dawdling bike ride.