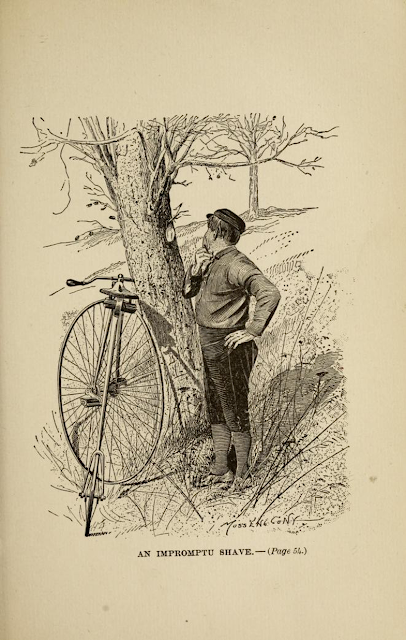 “One day, wishing to get rid of the several days’ growth of bristling beard on my face, I took out my shaving apparatus, hooked the leather strap to the brake handle, honed the razor, found an old can, brought some water from a brook near by, pinned the pocket mirror on a tree, and got as clean a shave as I ever had, washing my face with one corner of a handkerchief, and drying it with the other end.”
--George B. Thayer Pedal and Path: Awheel and Afoot across the Continent (1887)

George B. Thayer was on the outskirts of Chicago, in the middle of the westward leg of his solo journey across America in 1886, when he succumbed to an overpowering impulse to get off his high-wheel bicycle and shave his face. I imagine there are, at this very moment around the world, many Movember-weary cyclists who can appreciate—and are perhaps jealous of--Thayer’s bold, some may even say rash, “IMPROMPTU SHAVE.” 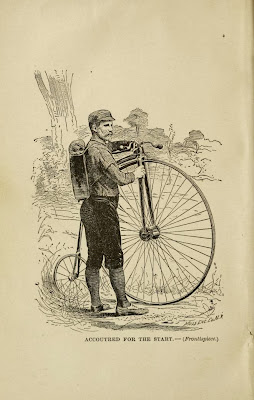 I don’t think Thayer is shaving off his moustache here. Every other illustration of him in the book has him sporting a well-groomed ‘stache—as was typical of men in Thayer’s time. Rather, he’s shaving the several days’ growth of itchy beard (speaking of rash), a condition the male cycle-traveller from any age will be familiar with. What’s so great about this image, of course, is Thayer’s assumption that shavinga la plein is something a fella can do at all.

Open-air personal grooming (flossing at the park, ear-cleaning on the street, an enema on the beach, etc.) is not generally something that happens much in North America these days. But why not? Animals do it, and as much as we try to deny it, we too are creatures of nature, after all. Perhaps Thayer is onto something primal here—heeding some deep animalistic urge for spontaneous grooming, like a cat licking itself whenever it feels like it.

In any event, I’m making room in my seat-post bag for a razor, a tube of shaving cream, and a small mirror. I'll be ready when the bugle-man of Nature calls out for AN IMPROMPTU SHAVE.