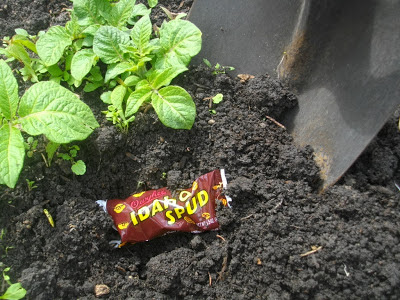 The Idaho Spud is one of my favorite candy bars (or chocolate bars, as we call them in Canada), and it makes for a perfect road snack for bike rides. The catch is that you can only get an Idaho Spud in actual Idaho—or some parts of Montana, Oregon, and Washington State. My pal Penn just returned from a drive down through some of those places on his way to Arizona and he was kind enough to bring me back a sack of spuds, which I’ve been enjoying on bike rides all week.
The Spud is something of a throwback in the candy world. It was created in 1918 in Boise during an age of remarkable candy bar diversity, when a stunning array of candy bars were made by local candy makers and given eccentric names like Chicken Dinner in a Box or Quarter Section—the kind of thing no focus group would ever let fly today. Over the twentieth century, however, the North American candy bar market came to be dominated by two or three mega-corps like Cadbury, Nestle, and Hersheys, driving most of the small-time family operations out of business. The Idaho Candy Company is one of the few survivors, and it seems to have a fiercely loyal customer base, of which I am a member. (For more on the fascinating world of candy culture in the U.S., check out Steve Almond’s excellent Candy Freak: A Journey through the Chocolate Underbelly of America.)

The name alone is genius. Most (though not all) candy bar names tend to have associations with a particular flavor (Butterfinger), texture (Crispy Crunch), size (Mr. Big), or a famous person (Reggie). You don’t find many named after a tuber, but when in Idaho, it’s not such a crazy idea. In fact, in a curious amalgam of pride and irony, the Idaho Spud has been adopted as a kind of unofficial state candy bar. The tongue-in-cheek motto on the wrapper is "The Candy Bar that Makes Idaho Famous."

The first thing you notice about the Idaho Spud is how squat and unremarkable it is. Kind of ugly even. This potato isn’t going to win any blue ribbons at the county fair. Rather, it looks like a cross between a potato half sliced lengthwise and a snow-dusted turd. It is not aesthetically pleasing. But that’s part of its strange charm, I think. It’s the chocolate bar that is not afraid to say, hey, I will look pretty much the same going in as I will coming out of you. I respect that. 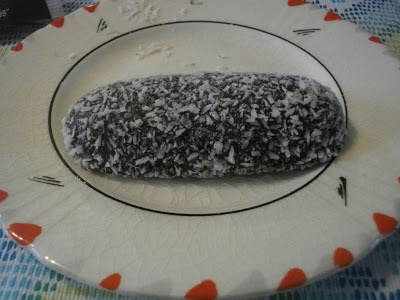 As for taste, here’s the description from the Idaho Candy Company website: “light cocoa flavored, soft marshmallow center drenched with a dark chocolate coating and then sprinkled with coconut.” Okay, sure, but I’m not going to pretend that the Idaho Spud actually tastes good. It really doesn’t, unless you have a thing for the marshmallow-and-coconut combo (something I generally try to avoid in a candy bar). In fact, with its lightness and size, it tastes and feels more like a cookie than a candy bar. My wife thinks they taste terrible. 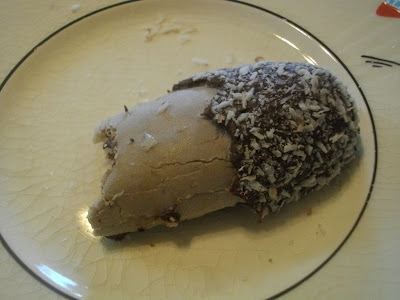 Nutritional value? Yes, it’s got a pile of fat—8 grams in a single spud, providing a whopping 22% of a fella’s saturated fat intake for a day. It contains about the same number of carbohydrates as an actual potato of comparable size.

The true appeal of the candy tater, I think, is simply its weirdness. With a goofy name, underwhelming turdish appearance, and low-key flavor profile, the Idaho Spud is the ironic, anti-candy candy bar. Like Thrills gum (“Still Tastes Like Soap”), the Spud is beloved not because the taste will make you swoon, but because of its retro feel, loveable oddness, and general underdog status.  The Spud breaks the rules of the candy bar world and somehow prospers. I've always got room for a spud in my musette.
Posted by Jasper Gates at 1:41 PM