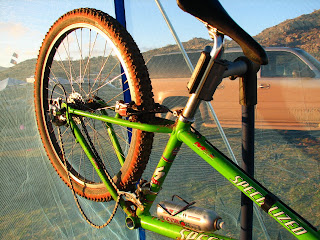 It's February again, and anyone who knows me also knows that it's time for my annual pilgrimage down to Arizona for the 24 Hours in the Old Pueblo.  This is, historically, an expensive race for me--now even moreso because I'm coming from Canada. That I am gouged by both airline and government every time I cross the border is obvious to anyone who has taken a similar trip.  But racing the 24 has always cost me a lot of coin, even when I lived close enough to ride my bike to the venue. Nevertheless, my bags are already packed.

I'll begin by acknowledging that just showing up to the race isn't cheap. It's well over a hundred bucks just for the privilege of lining up at the start. The race is in the middle of the desert, so you have to schlep in three days of food, and that means gas--and for out of towners, rental costs--for a vehicle to do the schlepping.  You can also buy some food on-site, but you're talking ten bucks a sandwich then, and it takes a lot of sandwiches to power 24 hours of riding. You're going to cut through a lot of Cytomax or Perpetuem. You need a hotel, probably, for the days before and after the race. You probably need a plane ticket or enough gas money for an interstate drive to get there.   Unless you have a fairly lucrative job or a generous trust fund, it is, financially, a hard event to do just for the hell of it.

But those aren't really the costs I'm talking about. Those costs are, in a sense, fixed. They can be budgeted for and planned around. Shortcuts can be taken.  Beds can be shared. I'm talking about the costs that the race itself imposes.  I should also make clear that I'm not talking metaphorical costs either. I'm talking penalties, counted in dollars, that this race has levied on me.

This topic occurred to me last week while talking to Penn about some of the terrible weather this race has seen.  Tando and I have been out in blizzards, in drizzle, and in sub-freezing temps--all of which are pretty unusual in Tucson. But the year before our inaugural attempt, it apparently rained so hard that large sections of singletrack turned to knee-deep rivers. In an environment composed largely of granite sands, this essentially turned the course into a hydraulic belt sander. The riders who continued to compete had to replace their entire drivetrains by the end of the day, with many having to replace, wheels, bottom brackets, and suspension components as well.

"Why would they keep racing?" asked Penn, "it seems better to stay in the tent when it's like that."

At the time I agreed. The thought of replacing most of a bicycle for a day's ride is bewildering, especially as none of the bikes in questions are exactly entry-level. But I've broken a lot of gear out there on that course.  My record of finishing on my own bicycle only stands at 50%.  I've kept riding after blowing out the seals on a $900 fork. I've turned a bottom bracket to mulch and ruined a crank by riding it long after I should have pulled off.  I've snapped a frame out there.

The why, I think, comes down to the nature of endurance racing--more than other kinds of racing, it's first and foremost a test of the self. Everything about an endurance race wants to break you. The distance. The time. The weather. The lack of sleep. The weird food. Your own gear. Your own mind.  Because an endurance race rarely comes down to being fast enough or fit enough--it comes down to being firm of mind. There are parallels to be drawn to life itself, of course, but the nice thing about an event is that it doesn't allow for much in the way of excuses.  You make it to the end or you don't. You get your laps, or you don't.  Plenty of people are dabblers, of course, most of the field probably fits that description.

But there's a percentage of riders out there who have drawn a circle around that date on the calender.  Riders who have said to themselves, "This is the day, above others, is the day that counts" or "It is by this day that I measure myself."  Once that commitment gets made, disaster is no longer a good reason to stop. The expense of a new derailleur isn't justification to turn into your sleeping bag for the remainder of t,he night.  Rain, cold, pain, and financial costs are challenges of equal inevitability and irrelevance, nothing more than additional marks on the gauge held against your soul.