Fatty in the Snow 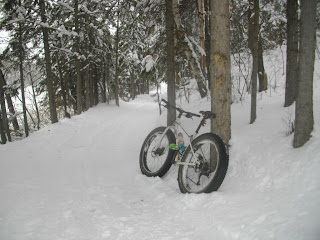 An early November snow dump, a borrowed fat bike, and a day off work –all the ingredients for the ultimate Snow Day, fat-bike style.

Penn, my good friend, is so far under the weather I can barely see him, but he graciously offers me his Pugsley and points me toward Edmonton’s river valley. “Go forth, ride hard, have fun!” he exhorts in a scratchy voice. Val meets me under the Groat bridge. My hands are already cold, so I bust open my chemical warmers and begin massaging them inside my mitts.

Conditions are perfect for a snow ride—in the four days since the snow fell, sidewalks have been mostly cleared, trails have been packed down by walkers. The temperature is reasonable: about minus 7 degrees C. Wind is nothing more than a rumor.

Just over the bridge sidewalk, Val freelances a radical shortcut to the lower parking lot, hurling himself and bike down a steep, snowy embankment. At the bottom, the bike goes one way; Val goes the other. Impromptu snow angels. Val isn’t admitting it, but he’s gotta have powder in his pants. I opt for a more conservative descent; this fat bike/snow riding thing is still new to me. 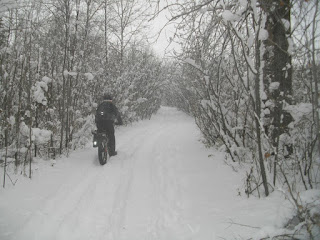 At Emily Murphy Park, we pick up the horse trail along the river. Nature-loving trail walkers have made a hard-packed track about a foot wide, just about right for fat tire navigation. I can’t believe how fast we cruise along. I skied these trails yesterday and had thought then that I was cooking along. But now I’m flying, floating on these wide-boys. My hands are warm now. The snow sticking to the branches overhead makes it seem like we’re shooting through a snow tunnel. Damn, this is a blast! I’m talking kid-on-a-bike fun. 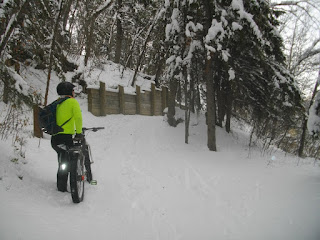 Despite the pontoon-like tires, the fat bike feels positively nimble on these trails. Occasionally, though, I wander off track into the deep snow where the going is tougher—a reminder of how the littlest difference in trail conditions can affect a snow ride. 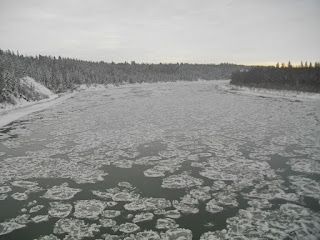 We stop for a break on the Hawrelak footbridge to watch the ice in the river. Frozen globules drift down stream, coalescing into larger and larger chunks, including one massive imperial star-destroyer-like floe, which we watch smash into the bridge’s concrete footings. (The impact even creates a Star Wars-worthy ominous sound effect).  The more you stare at the globs, the more they begin to look like a microscopic image of platelets or some kind of “good” bacteria. 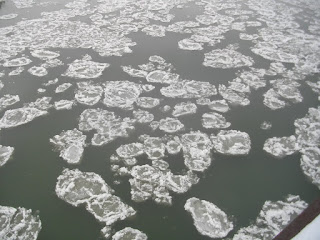 We see a few walkers on the trail. Two grinning older gals on showshoes who stop to ask the requisite questions about the fat bikes. (Val’s heard these a million times but never seems to tire of the Q&A.)  And we meet one young male solo hiker, shambling along with a huge bag of Rold Gold snacks and a bashful smile. Whizzing past, we tip our chapeaus to The Ambassador of Pretzels. 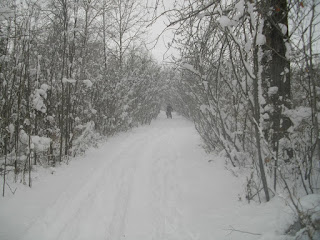 What’s that tingling sensation I’m feeling? No, it's not pretzel envy. I believe it just might be a shiver of fat magic.

Best Snow Day ever.
Posted by Jasper Gates at 7:16 PM