The Semi-Serious Cyclist likes to go fast. But only sometimes. Being semi-serious doesn’t necessarily mean riding half the speed of a serious cyclist. Instead, the SSC just prefers to go fast about half the time.

The SSC totally gets the appeal of speed. Even the most casual, Wal-Mart-bike-riding cyclist would be hard pressed to deny this fact:  It’s fun to go fast on a bicycle. Anyone who’s ever gone for a spin on pretty much any bike knows there’s nothing quite like that exhilaration that comes from grooving along, flying down the road, spinning, driving, hammering—whatever you want to call it. Especially when there’s a wicked tailwind, or the legs feel unusually strong, or there’s stress to burn, or only one hour will have to do instead of three, or when the whole damn ride feels slightly downhill, or, simply, when the spirit moves.


It’s no accident that velocity and vélocipede (later shortened to vélo) come from the same root. The promise of speed has always been part of the bicycle’s allure, probably the single most attractive feature for many riders as well as observers. In the 1910s, for instance, the Italian Futurists, a radical group of visual artists and poets, looked to the bicycle (as well as the motor car) as an embodiment of the ideals and marvels of modernity: speed and technology. Here’s Umberto Boccioni’s painting of 1913 called “Dynamism of a Cyclist,” one of his many attempts to capture the elusive beauty and kinetic energy of a speeding bicycle. 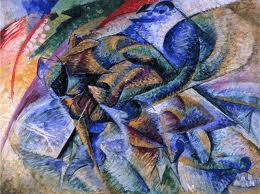 From almost the moment the vélocipede was invented in the 1860s, people figured out ways to race them. Indeed, the mechanical evolution of the bicycle is closely tied to the quest to go faster. Most of the advancements in bicycle technology over the years (think derailleurs, pneumatic tires, super-light frame materials) have come about because of riders’ desire to go faster, faster, faster. Today, as much as ever, the latest models tout lightness, aerodynamic design; subtracting those few grams or altering the shape of a fork will make you that little bit quicker, or so the manufacturers want you to think.

But this pursuit of speed can, of course, be dangerous, and not just because of crashes. In the 1890s, some physicians, who generally endorsed the health benefits of riding a bicycle, warned of the addictive nature of the activity, due to the "delirium of swiftness" one can experience on a bicycle. There has always been a sub-species of cyclist for whom achieving this intoxicated, altered state of “delirium,” sadly, becomes the sole reason to ever mount a bicycle.

Back in the 1880s and 90s, they were called “Scorchers”—mad cyclists,  usually young men, who bombed through public parks and roadways, disregarding the rules of the road and codes of politeness, threatening to crash into and/or run over innocent pedestrians. In the popular press of the day, cartoonists loved to depict these speed demons as crazed bike-mounted monkeys or hideous, pedalling maniacs.

Today, we might call them Über-Serious Roadies. The machines they ride are slightly different, but the mentality is the same. Speed is the only thing that matters. The USR stares down at his computer, fixated on the average speed, or stares blankly ahead, focusing on that imaginary spot in the distance, oblivious to the rest of the cycling experience.

The SSC, however, is in no danger of totally succumbing to the “delirium of swiftness.”  When it comes to going fast, the SSC prefers to pick his spots. He indulges in bursts of velocity, the way a social drinker tips back a couple of beers to get a slight buzz. And he might even go on the occasional speed bender. But the SSC is no speed addict. He lacks the monomaniacal focus of a Scorcher or USR. The SSC cares too much about other parts of the ride: visiting with fellow SSC’s, looking around for coffee, stopping for photo ops.

The SSC loves the thrill of going fast, but he doesn’t need to do it all the time, and he doesn't need the "delirium of swiftness" to revel in the dynamism of being a cyclist.
Posted by Jasper Gates at 9:08 PM